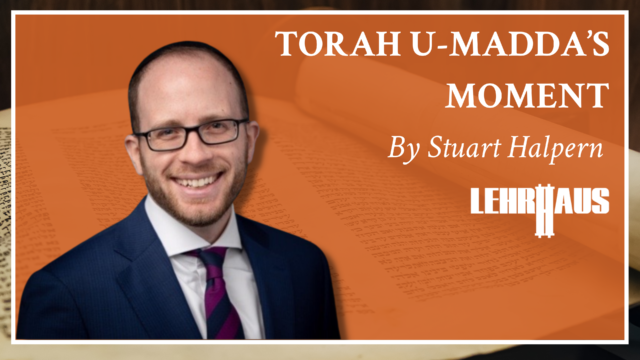 Lady Macbeth and Glückel of Hameln walk into a bar and immediately launch into an animated discussion on the concept of loyalty. They are soon followed by Maimonides, Nahmanides, and John Milton, chewing on apple chips while engaged in deep debate over the nature of Eden. Plato, Alexis de Tocqueville, and Menachem Begin are off to the side, munching on French pastries and hummus while swapping notes on statesmanship. King David, Rabbi Israel Salanter, and Martin Seligman stand nearby, chowing down on crudités while strategizing over how to cultivate true joy and strength of character. Rabbi Jonathan Sacks and Rabbi Norman Lamm had already arrived early, pulled up chairs, and so swiftly jumped into a nuanced analysis of Maimonides’s Aristotelianism that they each forgot to unbutton their suit jackets and loosen their ties. Sojourner Truth and Abraham Lincoln sit enraptured by Rabbi Joseph Soloveitchik’s impromptu lecture on the book of Esther while they wait for the proceedings to begin, while Rembrandt and Rashi choose to spend the time rendering biblical scenes in their notebooks. Finally, Alexander Hamilton, C. S. Lewis, Winston Churchill, and Rabbi Abraham Isaac Kook arrive, late of course, but with twinkles in their eyes and tea for everyone.

In Yeshiva University, this setup is no joke (though the bar―or rather, seminar room―serves only non-alcoholic beverages and tragically little tea).

Torah, faith, religious learning on one side, and Madda, science, worldly knowledge on the other, together offer us a more overarching and truer vision than either set alone. Each set gives one view of the Creator as well as His creation, and the other a different perspective that may not at all agree with the first … Each alone is true, but only partially true; both together present the possibility of a larger truth…

As such, President Ari Berman’s “Five Torot” of Truth, Life, Infinite Human Worth, Compassion, and Redemption provide a framework for an institution in which the business school offers classes on Jewish values in the workplace; there is a newly launched Rabbi Lord Jonathan Sacks Center for Values and Leadership led by Dr. Erica Brown; students convene medical ethics conferences bridging Jewish and general moral reasoning; courses seek to design new venues of the intersection between data analytics and Jewish texts; and academic Jewish Studies classes utilize archeological, literary, and historical scholarship in the study of Torah. At YU’s Straus Center for Torah and Western Thought (in which I serve as deputy director alongside the director, Rabbi Meir Soloveichik), the flagship Straus Scholars program seeks to train students intellectually, spiritually, and morally by bringing into dialogue the great thinkers and texts of both the Jewish and Western traditions. Its courses, public programs, op-eds, podcasts, and book projects are based upon the premise that such a conversation will not only enrich its participants but will also enrich the world at large.

In a 1990 interview prior to the publication of his book Torah Umadda, Rabbi Lamm expressed his aim to expose students to the cultural winds of modernity―not to be swept over by them, but to wrestle with them, critique them, and, when fitting, to allow them to dwell within and enhance a robust religious worldview. “It’s worth taking that risk,” he told his questioner, since, were we not to, we would be giving up on our commission to be a kingdom of priests and a holy nation (Exodus 19:6). According to Rabbi Lamm, the dual focus is not a strictly intellectual exercise; rather, it is a means of improving one’s character and reaching one’s divinely given potential by drawing from the wisdom of the ancients:

It is, to my mind, very clear that a person who engages in Torah and Madda is in no way compromising Torah by studying Madda. It is a compromise only if he studies Maddah [sic.] for parnassah, for a vocational reason. But if he does it for religious reasons, for Jewish reasons, because he wants to probe G‑d’s presence in all the universe, then this clearly is a part of his religious growth and a part of his shelemut, instead of something extraneous to it.

Ours is an age of social media hot takes in which once civil debate topics are transformed into verbal dunk contests. Questions about the tension between religious and civic identity, loyalty, freedom, family, and our moral obligations to others are ever present but often dominated by insulated partisan perspectives.

This, therefore, is Torah u-Madda’s moment.

It is crucial to train individuals who are equipped with the content, character, and confidence to bring knowledge of the best of the West―resting upon the foundation of our ancient tradition―into homes, communities, and the public square. It is also necessary to cultivate leaders who see truth not as emerging from having destroyed or “owned” the opposition but as emanating from the relationship between fields of knowledge alternatively conflicting, complementary, and complex. As the English writer and philosopher G. K. Chesterton noted, the most flourishing societies are those which draw―often and richly―from the wellsprings of knowledge gleaned over generations. While Chesterton was no friend of the Jews, his observation about how ancient voices can enlighten how we engage with our own era is reflective of a Torah u-Madda mentality. “Tradition means giving votes to the most obscure of all classes, our ancestors,” he wrote. “It is the democracy of the dead. Tradition refuses to submit to the small and arrogant oligarchy of those who merely happen to be walking about.”

The power of timeless Jewish ideas to positively impact the global moral conversation is already manifesting in timely ways. The New York Times and Wall Street Journal urge readers frazzled by unceasing phone addiction to adopt a “tech Shabbat.” David Brooks argues for the Exodus story―a story whose power and central theme of covenant are crucial for bridging political and social divides―as America’s unifying national narrative. In various national magazines, biblical characters are viewed as sources of comfort and solace in times of social and medical upheaval. Christian pundits concerned with their own religious community’s survival turn to Modern Orthodox Judaism as a model of success. In his Happiness Hypothesis, leading academic and public intellectual Jonathan Haidt develops the concept of “affective forecasting” (predicting our emotional reactions) by analyzing Ecclesiastes. Salman Rushdie has turned to Jonah to argue for the responsibility of writers to their era’s political challenges. Practically all modern American presidents have cited the Bible in their inaugural addresses (with the Hebrew Bible cited more often than the New Testament). Leading thinkers from multiple faiths, including Muslims, Mormons, Protestants, and Catholics, lamented Rabbi Sacks’s passing and wrote movingly of how they were inspired by his teachings. The list can go on. But it is not long enough.

The onus is on practitioners of Torah u-Madda to seize this opportunity.

We must devote increased financial and institutional resources to producing the next generation of Jewish leaders whose articulation of Jewish values, texts, and traditions can inspire individuals both within and beyond the Jewish community. Rabbis and educators must be trained in transmitting the depth of their Torah knowledge into accessible prose and widely consumed content. As William Kolbrenner has written, citing Rabbi Aharon Lichtenstein: “Madda becomes a kind of prerequisite for communicating with those outside of the fold.” For every book making the case for how Aristotle, Spinoza, Proust, Adam Smith, or William James can change/help/save your life, there should be one on Queen Esther, Rabbi Akiva, Judah HaLevi, Sarah Schenirer, and Rabbi Aharon Lichtenstein. For every development in artificial intelligence, there should be more articles on how Judaism defines the nature of personhood and how its ethical tradition might inform how we approach dilemmas from the trolley problem to robot-based medical decision-making. For every podcast on cultivating mindfulness, there should be one that mines the lessons of Pirkei Avot. The messages must be attuned to the ever-diversifying media landscape.

After all, it is not only Americans who look to Jewish ideas for modern inspiration. In recent years, Yeshiva University has engaged in conversation with faith leaders as diverse as educational and public policy experts from the United Arab Emirates, the head of the World Muslim League, the Archbishop of Paris, and rising young Chinese leaders who have looked to Torah u-Madda as a source of inspiration and a model worthy of imitation.

In the aforementioned interview, Rabbi Lamm cited the medieval poet Judah HaLevi’s use of a Platonic idea. “When you have a city, you have garbage collectors and philosophers, physicians and lawyers, secretaries and artists: all kinds of people with all kinds of roles,” Rabbi Lamm noted. “The ruler must see to it that all these various aspects of the community or collectivity mesh together, and that no one aspect displaces any other. Each individual has to have his role in the economy of an entire community.” The same is true of Torah u-Madda, argued Rabbi Lamm. “The ideal should be that you lead the orchestra like the prince who sees that everything meshes together and that everything finds its proper place.”

In our era of social, political, and spiritual displacement, those who identify with Torah u-Madda must orchestrate the global community’s emergence from discordance. By drawing from the well of our rich tradition and its millennia-long conversation with the surrounding culture, by being powered by a sense of princely purpose, we just might power God’s increased presence in all lives.