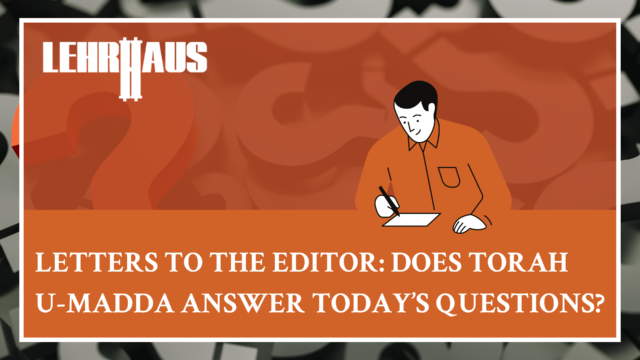 Much of the discussion on “Torah u-Madda” seeks to justify the study of non-Torah subjects, deal with the challenges that science and archeology might present to faith, and address the influence that cultural or secular values have on our community.[1] These discussions begin with the assumption that the study of non-religious topics requires justification, and that the milieus and the products of this learning pose challenges to religion. I think these assumptions are wrong and the results frequently fail to “justify” non-religious studies.

The Torah starts with the creation story. Rashi famously tells us that it starts with creation to justify the Jewish claim to Israel—something I fully support. But the description of God’s creation of the world also tells us just that. God created everything in the world, and therefore knowledge of anything in the world is potentially knowledge of God. Seeking knowledge, any knowledge, is intrinsically valuable. Some try to justify Madda on an instrumental or practical basis—this or that subject (usually science or medicine) is useful for a particular purpose, or some other subject (usually humanities) is not useful. This approach misses the point. The pursuit of knowledge is valuable in and of itself, and it does not have to be justified by being useful for a particular purpose.

Another misunderstanding is the confusion between the inherent value of an activity versus the allocation of time. Some approaches to Judaism treat choices in life as a video game, where the player can gain or lose mitzvah points based on what they do or how they spend their time. They claim that since “Talmud Torah ke-neged kulam” (Pe’ah 1:1)—learning Torah is equivalent to many other activities (or greater than other activities), one should learn Torah as much as possible to acquire as many mitzvah points as possible. I think this is a false dichotomy. Of course we have an obligation to learn Torah, and we have an obligation to encourage Torah learning. But I suggest that a life of pursuit of knowledge, observance of mitzvot, and fulfilling the obligation of Torah learning is one valued and encouraged by our religion. One does not have to devote oneself exclusively to Torah learning,[2] especially if one is drawn to the pursuit of other knowledge or other occupations.

The search for knowledge leads to knowledge. If we do not value that search, then we do not value the fruits of the search. Our community has moved away from valuing knowledge for its own sake towards valuing knowledge instrumentally: Torah u-parnassah. At the same time the rabbinic leadership in the United States has moved away from valuing facts and logic in psak, and moved towards claims of authority and “Da’as Torah.” Recent events have also illustrated the danger when the community does not place value in science and objective knowledge.

Separate but related to the issue of worldly knowledge is that of worldly (modern) values.[3] Modernity in and of itself is neither positive nor negative. Those values that align with Torah values should be embraced. We need to teach our family and communities that we disagree with those modern values that are not consonant with Torah values. We should also emphasize that within our religion there are those who emphasize values (or perhaps in some cases, more accurately the balancing of values) that also do not fit our understanding of Torah values. Some values are simply old, not timeless. The dangers from the influence of values from each side is not symmetric, but that doesn’t mean that they are not present. In the same way that we need to guard against excessive materialism, sexual immorality, and other antithetical values present in modern culture, we need to guard against misogyny,[4] discrimination (against converts, women, LGBTQ and others), gadolatry, and other values that simply should not be considered Jewish values.

Another challenge is what to do with worldly knowledge that appears to challenge religious beliefs. This notion borders on dualism, as if there is one god who gave the Torah and another who gave us the world. As R. Moshe Tendler zatzal wrote, “The reliance of traditional Torah law on the laws of science to make its ruling is the result of the Jewish definition of the monotheism that declares total identity between the God that gave us the laws of nature and the God that gave us His ethical principles on Mount Sinai.”[5]

I would suggest that the natural extension of this idea is that God gave us not only the laws of nature but the entire world, and therefore any contradictions are simply questions that have not yet been answered. We should of course grapple with the questions seriously, but the assumption of the common Source means that they do not impact belief. Belief, if it is present, is pre-existing. Accepting that Torah and the world stem from the same Source does imply that legitimate contextual reading of sources, as opposed to dogmatically insisting on literal readings, will usually fit far better with our and God’s reality.[6]

God created the world for us to perfect. We do that by learning Torah and living Torah. Living Torah includes living in God’s world, interacting with the world and God’s peoples, and learning about God’s world. There is no bifurcation. Those who ignore the knowledge of the world and do not value the pursuit of knowledge are the ones who have veered off the path charted for us by God and our tradition. They are the ones who should be having symposia to justify what they do and think. We should proudly pursue knowledge, study Torah, and live lives applying and practicing what we have learned. This is the way of perfecting the world and moving God’s creation forward.

The wide variety of ideas proposed in this symposium—a kind of Modern Orthodox wish list—shows how the term Torah u-Madda, however understood, has become, for many, a talismanic cure for the problems one perceives in contemporary Orthodoxy. Lest a false nostalgia lead us astray, we must recall the specific historical circumstances that led to the decision, in the late 1970s, to appropriate the words on the official Yeshiva University seal and designate them as the educational aim of the institution, and the outcome of that choice.

Beginning in the late 1960s, the Modern Orthodoxy that had largely characterized YU and the community with which it was associated faced the challenge of a rising Haredi Orthodoxy hostile to secular studies, especially on the post-secondary level, that was not for the purpose of making a living. Yeshiva College and Stern College, then liberal arts institutions, were therefore taboo for the fastest-growing sector of American Orthodoxy.

Rabbi Norman Lamm, who assumed the YU presidency in 1976, attacked the problem by replacing the previously used term “synthesis” with Torah u-Madda. Not only was the latter couched in a Hebrew recognizable to the Haredi world, but it also seemingly maintained a separation between the two halves of the curriculum, keeping Torah from being “synthesized” into something else. Torah u-Madda was part of a broader plan by Lamm to replace “Modern” Orthodoxy, which had negative connotations for those repelled by modernism, with a more generic “Centrist” Orthodoxy.

The key components of his Torah u-Madda Project, which was funded by foundation grants, were a lecture series, a Torah U-Madda Journal, and Rabbi Lamm’s book, Torah U-Madda: The Encounter of Religious Learning and Worldly Knowledge in the Jewish Tradition. Anyone who today skims the topics of the journal articles or reads the book will see that this initiative aimed at justifying the pursuit of secular studies along with Torah, both in the eyes of Modern Orthodox Jews and Haredim, as realms that should enrich, not clash with, each other.

But two intersecting forces weakened the appeal of Torah u-Madda at YU itself. One was the Torah-only approach picked up by students during their post-high school year (or more) in Israel, aided and abetted by the hostility toward the liberal arts on the part of faculty members of the rabbinical school, especially once Rabbi Joseph B. Soloveitchik was not longer active. The other was the weakening of the American economy in the 1970s that led students to demand business and accounting courses that would prepare them to make a living upon graduation, and that necessarily entailed a reduction in liberal arts requirements. Today, YU’s Sy Syms School of Business educates a majority of male undergraduates. Instead of Haredim joining the Modern Orthodox by flocking to Torah u-Madda, many Modern Orthodox students have adopted the Haredi model of Torah and parnassah even as they willingly immerse in a degraded popular culture and spend hours on social media. The failure of Torah u-Madda was glaringly evident upon Lamm’s retirement in 2003, when no rabbi-scholar personifying his ideology could be found to succeed him.

Torah u-Madda in its original sense is an unlikely cause to rally around today if only because the liberal arts have continued to decline in universities across the country and pre-professional training remains the prime educational goal in our community. But there is a deeper reason for its irrelevance: the issues that confront Modern Orthodoxy today are far more complex than those of the 1970s and they are not, I believe, simply resolvable through an educational program that combines the holy and the mundane. Here are just a few: What shall be our response to the Pew finding that 30% of Jews raised Modern Orthodox no longer identify as such today? How shall we deal with feminism, gay rights, indeed the whole panoply of gender nonconformism? Can we make our peace with biblical criticism? Is intensive Talmud study turning off more young men than it attracts? Should we focus more on mystical and Hasidic approaches? Is the growing rate of Modern Orthodox aliyah, as admirable as it is, siphoning off potential leaders and innovators, to our detriment?

Torah u-Madda cannot begin to address such matters. Only serious thinking, experimentation, and bold decision-making—with the help of the Almighty—might.

[1] I am indebted to Rabbi Marianne Novak for providing the main idea of this essay, an idea she learned at the Yeshiva of Flatbush in the 1980s.
[2] See here for a discussion of the technical obligation of times for Torah study.
[3] For a more extensive discussion of the topic, see the introduction of this paper.
[4] Of course Judaism recognizes and mandates some differences in gender. There are also legitimate halakhic disagreements on these topics. On the other hand, there are some attitudes and halakhic positions that are simply beyond reasonable, and we should be very clear on that. One example that comes to mind is the erasure of the pictures of women.
[5] Rav Tendler did note that sometimes halakhic categories do not correspond to the natural world, but that does not decrease the significance nor importance of the natural world. See Gesher, vol. 1 p. 83.
[6] I have analyzed this idea with regard to the three major Abrahamic religions here.