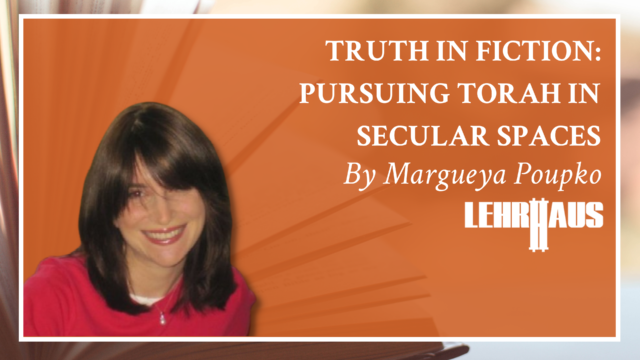 As an English teacher in a right-wing girls high school, I am no stranger to the question a student asked me once: “If everything comes from the Torah, then why do we study literature?”

I have heard this question asked in a variety of ways – everything from “How could a yeshiva have us read books that go against our morals?” to “Isn’t literature just a waste of time?” The questions no longer surprise me, but they never fail to sadden me. I find them ironic for a number of reasons, not the least because what inspired me to teach literature in the first place was how close reading brought me to God. If anything, it was the excitement of discovering life lessons through unlikely places that I found spiritually profound. But even more than that, the questions jar me for the same reason that I am always amazed when scientists dismiss the existence of God – how could the people who study the universe be the very people who do not see God’s hand behind it? As students of literature, how can anyone not see the vital role these texts play not despite our religion, but in direct harmony with it?

Let’s first address the humanities on their own, the value of which is indisputable, despite it being disputed regularly (whether it is cutting arts from the budget of any institution or downplaying the significance of classes that don’t directly lead to a career). As our society marches closer to a utilitarian, process-oriented construct in which we Google for conclusive answers and eschew the process of free thinking, we strip ourselves of our own humanity, allowing robots to take center stage in our homes and in our pockets. While computers can give us information, they cannot give us experiences, knowledge, critical thinking, or empathy, the very skills that distinguish us as people and are cultivated and perfected through studying the humanities. We now dismiss the very subjects that remind us of who we are and encourage us to embrace the messiness of the human condition, in favor of clean-cut formulae and efficiency.

We know, though, that when Hurricane Sandy, Covid, and other crises shut down our access to anything soft – whether library books or theaters or museums – we all felt a loss that could not be filled. Whether it’s strict escapism or a deeper understanding of the universe, we look to the products of the humanities to fill in the gaps that our frenzied, high tech lives leave in their wake. We gain appreciation for the layers and nuances of language, we argue the merits of fictitious characters’ decisions, we measure their experiences against our own. We both lose and find ourselves in these manufactured worlds, so close to our own yet pleasurably distant. Society needs these outlets for entertainment, expression, and analysis, and the Torah society is no different.

But what about this specific subset, the relatively insular world of the Torah driven community? What value does literature hold for a people who already have a blueprint for how to live and feel? There are three schools of thought when it comes to this question – shun these influences for they all carry risk; utilize them as a necessary evil for obtaining a degree and career but nothing else; or embrace the broader world not as irrelevant to Torah but as a vital part of understanding it in the first place. The third, while the most audacious, speaks to the challenge of the modern man: exercising free will and strengthening one’s convictions through confrontation rather than avoidance. Why would we be placed on this Earth if not to engage in this sort of battle, and can we not believe that the Torah will survive, or even thrive, from the challenge?

The world of literature is a powerful one – to dismiss it as a “waste of time” is to outright deny the role it plays in our lives as Torah Jews. When Nathan the prophet was tasked with the unenviable job of chastising King David for his sin, he wisely presented David with fiction. He spun a related tale of a similar plot, and it was through the smokescreen of a fabricated story that David was able to own an uncomfortable truth. This is but one of the many tools of literature: the lifting of a mirror to man, however obscure and disfigured, only to reveal the hidden and unpleasant truths within ourselves. We are better people for it, and we are better thinkers for having taken on the challenge to extrapolate and incorporate these lessons.

And even in the abstract, when literature is not about confrontation but the mere pleasure of experiencing another person’s journey, we are bettering ourselves in the process. My desire to become an English teacher in a yeshiva was first sparked in the classrooms of secular professors in a religious college, teachers who offered stories for no other reason than the joy of analysis. Almost despite themselves, the classes took on discussions rich with Torah thought – what should Lady Audley of Lady Audley’s Secret do, a married woman who presumes her husband to be dead, changes her identity and marries someone else, only to then have her first husband track her down? The tension of her polygamy triggered a fascinating discussion on the sanctity of marriage and the function of the get. In my own classroom, we contemplate the necessary role that confession plays in redemption as we watch Hester Prynne of The Scarlet Letter advance in her Puritan community despite her sin – perhaps even because of it, having allowed the sin to become an opportunity for growth – while her partner in crime, Dimmesdale, languishes under the burden of the secret he refuses to share. We watch Macbeth change from an even-tempered man to a blood thirsty, paranoid tyrant through his own choices – and echo the Sages’ wisdom when they both celebrated and warned that man is formed according to his own actions. While the lessons of Elul, teshuvah, and behirah happen effectively in their sanctioned classes, there is something perhaps even more powerful in seeing these lessons in unrelated, secular texts. A value system echoed or even misrepresented in an outside text allows for a resonance that a single-minded approach to Torah does not. Even when these values stand in contradiction to these works, such as when teaching The Great Gatsby or The Crucible, the conflicts only reinforce what we already know to be true – a morally dubious path will only lead to the downfall of man. These stories are not problematic as much as they are cautionary tales, all the more for their depiction of a struggle.

And perhaps most importantly, as my students and I struggle over Victor Frankenstein’s hubris and subsequent unwillingness to take ownership of his mistakes, we not only discuss the dire importance of personal responsibility, and the crucial need to set aside one’s ego as a scientist and as a parent, but we also find surprising bouts of sympathy for both him and his creation, men of suspicious and even deadly actions who can still remind us what it is to be human. And we can both learn from their mistakes and empathize with their temptations and limitations. Altogether, we are becoming more human as a result.

Even (or especially) in instances when students struggle as they sympathize with a villain, we are not distancing ourselves from Torah truth, but coming closer. Uncomfortable as it is to feel warmth towards someone whose choice we despise, it is this very nuanced level of thought and emotion that creates complex minds and encourages open, profitable discourse. As F. Scott Fitzgerald famously wrote: “The test of a first-rate intelligence is the ability to hold two opposing ideas in mind at the same time and still retain the ability to function.” Surely as people of the Book, meant to emulate God in His endless capacity for sympathy alongside judgment, we can benefit from these exercises, not by undermining our own principles but by sustaining differing viewpoints as a means of strengthening our insight and understanding. In today’s time of intense polarity, literature has never been more important for this reason alone.

Perhaps the biggest testament to the Torah’s divine origin is the fact that there is something in its pages for literally everyone. A concrete, linear mind will thrive on the clarity of expectations the Torah puts forth, while a mystic will find endless meaning in the spiritual and cosmic elements that are just as present. One can find justification for a more rigid infrastructure of religious adherence right alongside the person seeking validation for social justice and charity. This holds true for the literary minded as well. Malbim’s commentary emphasizes the richness not only in the concepts of the Torah but by its very diction; Radak was as much a grammarian as he was a philosopher, engaging in close reading of Tanakh to derive deeper meaning; parshah stories provide us with the narrative arc of people whose mistakes shed light on our own and whose lessons are meant to be studied and internalized rather than whitewashed and canonized. Whether on a sentence level or in a bigger picture way, the study of literature can and perhaps should serve as a training ground for how to better study Torah, while the Torah itself helps further enhance the study of any other text.

That student who asked me about why we study literature will not be the last. The question speaks to both the strength and the challenge of her particular education – Torah is elevated and celebrated, rightfully so, but in so doing, a wall has been erected that keeps students like herself from recognizing the power that other subjects have, not only in servicing her in their own right, but by even enhancing the Torah that she prioritizes.

To her, to her classmates, and to the future students who will ask me, I say: look around the world, look within yourself, and consider that the question is not how can a yeshiva allow and even condone the study of literature, but how could it not?