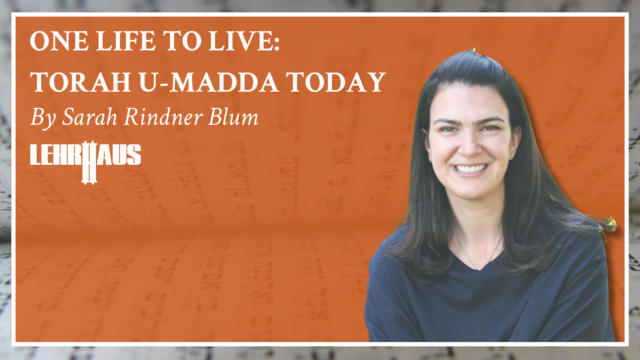 In Isaac Bashevis Singer’s short story “Something is There,” Rabbi Nechemia of Bechev, the ineffectual leader of a failing Hasidic court, becomes a heretic due to the theological problem of suffering in this world. He has high hopes for secular life, but they are dashed when he encounters even more misery on the streets of cosmopolitan Warsaw than he saw in Bechev. He realizes, moreover, that a neutral pursuit of truth may very well be impossible:

Rabbi Nechemia in this story, and perhaps Singer himself, struggles with a question that may be familiar to Orthodox Jews who look to Western culture as a source of enlightenment. A broad worldview is important, arguably essential, for appreciating the fullness of the Jewish tradition and its message for the world. Yet when we place “madda” on a pedestal that is parallel with Torah, we risk reifying it, looking to it for answers that it cannot provide or glossing over its inadequacies in a shallow pursuit of synthesis.

Indeed, what Reb Nechemia realizes over the course of the story, through his experience in Warsaw and also extensive reading and study, is that “there are no heretics.” Even the greatest secular scientists and philosophers possess their own belief systems and idols. It is doubtful that worshiping these phantoms leads to more happiness and greater goodness than serving the God of Abraham, Isaac and Jacob. Reb Nechemia thus questions the ability of science and the humanities to address the core questions that Judaism answers:

“All books had one thing in common: they avoided the essential, spoke vaguely, and gave different names to the same object. They knew neither how grass grew nor what light was, how heredity worked, the stomach digested, the brain though, how weak nations grew strong, nor how the strong perished. Even though these scholars wrote thick books about the distant galaxies, they hadn’t yet discovered what went on a mile beneath the crust of the earth.”

While Singer was hardly a religious writer, the thrust of his story is a simple, spiritual one. While Reb Nechemia seeks to find something fascinating over the fence separating Torah Judaism from the rest of the world, he ultimately realizes there is no fence and all books are grasping at the same core mysteries, some more successfully than others. His interest in dialectics, in black and white, in good and evil, transitions into a kind of holistic realization that “something is there.” Beyond this, he doesn’t make any claims to know the truth.

Torah u-Madda, the tagline of Yeshiva University, describes the encounter between Jewish wisdom and Western culture. It is often used as a confident slogan of the centrist Orthodox world. For years I have taught English literature in Jewish environments and continue to be amazed by the ability of such texts to make some of our deepest Jewish values come to life. Now as a parent, I preface the bedtime Shema each night by reading to my children novels, stories, and folk legends from around the world. It is axiomatic for me that religious Judaism has nothing to fear from the best of these narratives, and that they give us helpful tools to make sense of our lives and experiences.

At the same time, I am also sympathetic to R. Nechemia and his discoveries about the limits of general culture, science, philosophy, and literature to produce the kind of goodness and meaning that is the natural by-product of the Jewish religious tradition. These past few years have been ones of great disappointment for me in the American Modern Orthodox community in which I was reared. I cannot identify the precise inflection point. Perhaps it was during the partisan frenzy of the Trump presidency, when mainstream Modern Orthodox voices allowed a media-driven party line to overshadow appreciation for basic policy gifts to our community, which were gratefully and unselfconsciously acknowledged in Haredi and Israeli circles. Perhaps it occured as I gained a greater personal familiarity with various Modern Orthodox educational institutions. These schools are wonderful in many ways, but they also exhibit deep confusion about their priorities and allegiances, whether it be to the Jewish souls of our children and financial security of their families, or to their success in an ever-competitive race to demonstrate elite superiority and admittance to universities that are obviously spiritually bankrupt. Within the past two years, we’ve seen four- and five-year-old students obligated to wear masks all day in Modern Orthodox schools, despite a dearth of conclusive data as to their efficacy, while students in Haredi schools did no such thing and seemed to suffer no consequences. This situation, though thankfully over in most educational settings, is to me still a source of embarrassment. Was the belief that these interventions protected our children well founded? Was its attendant policy based on thoughtful consideration of benefits versus costs? Or, by falling into line with surrounding cultural consensus, itself in flux and riddled with inconsistencies, did we go further than we should?

Our collective failure to establish limits to the encroachment of popular but potentially destructive trends from the surrounding society is a failure of Torah u-Madda―if not in theory, then in practice. I suppose the examples I shared are a laundry list of my own grievances.  It is certainly possible to have respectably different takes on these and other issues. But overall, one might still agree that Torah u-Madda can often function as less of a lofty spiritual directive and more as a kind of cover. It enables otherwise traditional Jews to maintain an unreflective allegiance with trends within liberal society that, if left unchecked, will harm us or even be the end of our religious community.

Torah Umadda does not, of course, imply the acceptance of all that goes by the name of modernity. Who, after all, is willing to swallow whole the bait of a triumphant modernism that reeks of the burnt corpses of millions of victims of Nazi gas chambers? Torah Umadda… does not assume that all that is new is good or bad. It holds that the potential spiritual havoc wrought by confronting the insights and values of contemporary Western culture is far less pernicious to the truth of Torah than that caused by ignoring the whole of man’s cultural heritage and thus not knowing how to deal with it at all.

For Rabbi Lamm, Torah u-Madda is a framework in which we engage with Western culture, even if only to reveal its limits. In Singer’s story, Reb Nechemia’s journey away from home turns into a journey toward home once he throws himself into the study of science and Western philosophy. This is not because these texts inspire him per se but rather because they teach him the limits of a godless framework in enabling access to the truth he desperately seeks.

As an undergraduate at Stern College, I wrote a piece called “A Consideration of Synthesis from a Student Point of View,” where I grappled with Rav Aharon Lichtenstein’s influential essay, “A Consideration of Synthesis from a Torah Point View.” In the original essay, Rav Lichtenstein offers a compelling framework for the ideal relationship between religious and secular studies. His essay is brilliant in both form and function—its eloquence is clearly the product of a profound engagement with Western literature, and its subject aims to make a case for the proper integration of such culture within a Torah framework. To be honest, in reflecting upon the exchange, it’s hard to believe I had the nerve to take issue with such a magnificent essay.

At the time, my objection was more of a practical one. I wrote, “Students who find literature interesting enough to read and care about tend to find themselves to a certain extent ‘lost’ in the worlds they encounter, temporarily losing sight of the relationship between a novel they are immersed in to Torah values they’ve inherited.” I wrote from a place of confusion. I identified with the reader St. Augustine criticizes as “weeping the death of Dido for love of Aeneas, but weeping not his own death for want of love to Thee [i.e., God].” My sense was that ideological defenses of Torah u-Madda are not adequate for the student who is still on a religious journey and is seeking to uncover truth for themself. My conclusion: “‘intellectual schizophrenia’ is alive and well here at Yeshiva University, and we would benefit to recognize it as such.”

Yet in the process of articulating this confusion, perhaps I did not pay enough attention to the end of Rav Lichtenstein’s essay. There he rejects the dualism of sacred and profane and states that “life is basically one…while kodesh and hol are neither identical nor coextensive, they are contiguous and continuous.” Rav Lichtenstein concludes, “The Torah is neither world-accepting nor world-rejecting. It is world-redeeming.”

This is the spirit of Rabbi Lamm’s treatise as well. A great scholar of Hasidut, he opens with a quote by Rabbi Zadok ha-Kohen of Lublin: “I heard it said that God wrote a book—the world; and He wrote a commentary on that book—the Torah.” For both Rabbis Lamm and Lichtenstein, there is one world and we have one life to live. Torah u-Madda is not a philosophical truth about the dualistic nature of the universe but rather a practical means of furthering a holistic and unified Jewish religious end goal.

This, I believe, is what Torah u-Madda should look like today. Perhaps it does not even need to be identified as such with a tagline. Rather, it is simply demonstrated by living a full and broad Jewish life, one in which we seek truth wherever we can find it and feel no insecurity rejecting commonly held societal beliefs when they conflict with the eternal values of Judaism as expressed in the Torah and interpreted by religious communities throughout history. Of course, this is easier said than done. As with Reb Nechemia of Bechev, who can’t understand or appreciate his Jewish life until he traverses through the dark underbelly of Warsaw, this vision of Torah u-Madda does not work when delivered in a prescriptive, top-down fashion. A little exploration, a little agitation, a little confusion—these are necessary steps to sort through the complicated bounty of Western culture and discover how our Torah heritage can uplift it. In the spirit of Torah u-Madda, perhaps the words of the great and problematic poet T.S. Eliot may be invoked here:

We shall not cease from exploration
And the end of all our exploring
Will be to arrive where we started
And know the place for the first time.