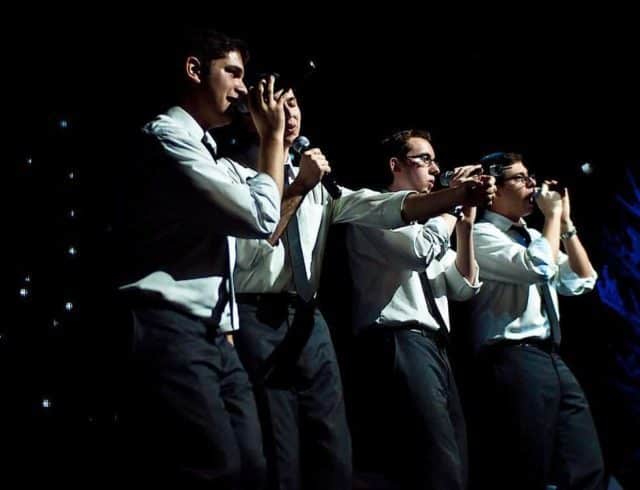 It was a hit because it’s catchy, it’s dancy, and the guys can really sing. And, let’s be honest, the Hanukkah pop song pantry is pretty bare. There’s some esoteric Matisyahu, some historically confusing Woody Guthrie, and a bunch of Adam Sandler nonsense. After that, my nana’s endless stash of sugar free kichlach starts looking relatively appetizing by comparison. So that’s the simple explanation, the peshat: The Maccabeats’ “Candlelight” works because it sounds pretty good and the competition is limited in both scope and quality.

But what, beyond its obvious sonic merit and colorful video, made the Maccabeats’ adaptation of Taio Cruz’s “Dynamite” a sensation capable of garnering tens of millions of YouTube hits?

Such analytical journeys often benefit from a kickstart of personal experience, and for that my own will have to suffice. On whatever day in 2010 I first heard “Candlelight,” my initial reaction was one of joy, but also something else. The song was both fun and funny. Now, sure, it’s a playful concept and there’s something clever in its execution. But, for me at least, that wasn’t it. In fact, I remember being struck primarily by the song’s lyrical sincerity–think about the song’s bridge, an almost embarrassing paean to the Great Menorah. My amusement, I think, resulted instead from a clash of expectations. In my worldview, admittedly disproven by the case at hand, the cultural spheres of Orthodox Judaism and danceclub sugarpop existed on different planes, never to be mixed. Seeing them in such an unapologetic embrace resulted, for me, in a sense of comic incongruity. Like a roller skating dog, “Candlelight” provoked a satisfying and comedic feeling of “that can’t be and yet it is.”

Of course, “Candlelight” is more than just funny and perhaps to those more familiar with the culture of Yeshiva University, it wasn’t all that incongruous in the first place. Nonetheless, my reaction identifies a central quality of the song’s construction: it is, above all, hybrid. This descriptor is used in a variety of fashions these days, with different industrial metaphors having significant ramifications on how we come to understand the nature of cultural products such as “Candlelight.” Is the song a hybrid like a car might be, having two separate traits that work together in symbiosis but remain fundamentally separate? Is it a case of Jewish tradition grafted onto American culture, the suture tight but the seams apparent?

Or is “Candlelight” a hybrid like a pluot, in which the component elements are identifiable yet inseparable, combining to make something somehow both new and old, one and two? Just as you can’t take apart the pluot and point to the plum parts, maybe it’s not so easy to separate a Maccabeat’s experience of singing niggunim on Shabbos afternoon from his humming along to a pop station a few minutes after nightfall. The one might be constantly informing and transforming the other, resulting in “Candlelight” and a bunch of other other catchy, category-bending tunes.

The beauty of the song, and perhaps some element of its popularity, results from it being readily interpretable through both lenses. Like Jewish-Americans themselves, the song offers a simultaneous feeling of cultural distinctiveness and deep, thorough integration into a sprawling and vibrant Americanism. Attempting to define the slippery notion of the hybrid as it relates to minority cultures, the post-colonial theorist Anjali Prabhu suggests two primary orientations for thinking about the phenomenon: diaspora and creolization. Diasporic thinking, she argues, looks back in time to an originary point, with a particular focus on the anchoring effect of collective traumas, passed down from generation to generation. It stares backward, overlooking the the diverse historical experiences of group members in order to identify something upon which a sense of unity, strained though it might be, can be built. Creolization, on the other hand, is focused on the now. It points to the inevitable truth that people don’t live in an originary past and that what it means to be a member of a minority group today is the result of a historical process deeply informed by a variety of external influences. Furthermore, it is a perspective steeped in the idea that minorities not only transform fundamentally in the cauldron of a host culture, but also that these hosts will be transformed in turn by the presence of new minorities. The diasporist says we are American-Jews because we live in the United States and can point back to a tradition indelibly inscribed on an ancient past. The creolist counters that we are American-Jews because we have changed in America and America has changed us.

“Candlelight” is remarkable in its ability to attest to both things at once. Its narrative, the Hanukkah story, is a paradigmatic tale of collective, ancient, diasporic trauma. It is a battle against the Mighty Greeks who threaten to strip the Jews of their origin story in the name of an all-consuming Hellenism. The Jews fight back and are wounded. But they survive, emerging with a signature image by which to remember the ordeal. In the song’s aforementioned soaring bridge, the Maccabeats ask us all to envision collectively the miraculous menorah, its single drop of oil overcoming the indignities of the temple’s defilement and the fear of fading away. It is a magical, perhaps mythical, moment back to which we can all return when our differences start to obscure our unity.

This backward-looking diasporic orientation is hard to deny. But what of the more intertwined, creolized version of hybridity? From this perspective, a picture emerges in which even the ostensibly secular, non-Jewish elements of “Candlelight” come to evoke the fundamental complexities of American-Jewish life and identity. First, there’s the song’s engagement with popular music and particularly the holiday pop genre. If Jews can co-create “White Christmas” and “Santa Baby,” then certainly there’s something nicely parallel in the fact that Taio Cruz and Mike Tompkins (upon whose arrangement “Candlelight” is based) are credited on the most famous Hanukkah song of the 21st century. Interfaith cultural collaboration is not something that American-Jews do, it’s part of who American-Jews are, with plenty of gold records to prove it. “Candlelight” serves to extend and expand this aspect of American-Jewish identity.

The a capella nature of the track also attests to a certain creolized aspect of American-Jewish culture. The genre is, of course, synonymous with the American college campus, an institution held in famously, if perhaps stereotypically, high regard by the Jewish community. American-Jews attend college at an unusually high rate and make up larger portions of faculty than pure population numbers would suggest they should. Does this make college or a capella somehow Jewish? Certainly not in any exclusive fashion. It does, however, point to the undeniable fact that American-Jewish life has been profoundly impacted by the secular American college campus and vice versa. That Yeshiva University has a famous a capella troop simply cannot be understood via a worldview in which cultures are stable entities or art forms are considered the “property” of one demographic group or another. The Maccabeats are neither a pure expression of essential Jewish culture nor evidence of adulteration by the non-Jewish world. They are part of an ever-evolving cultural collaboration in which Jews of various backgrounds have long participated. The creation and success of “Candlelight” are testaments to this complexity.

Are all of these elements consciously apparent to the listener? Perhaps not. And yet there is nonetheless a sense in which the Maccabeats’ utterly unapologetic embrace of seeming contradiction remains a central aspect of the song’s joyous nature. “Candlelight” is many things at once. It is both a serious ode to faith and a smirking joke about popular culture. It is simultaneously wholly original and utterly, plagiaristically derivative. It is, like the rest of American-Jewish life, both diasporic and creolized. Belonging to a minority culture often requires a willingness to accept paradox not as a temporary means of getting by, but as a fulfilling, potentially permanent way of life. “Candlelight,” with admirable joy, puts this contradiction to music. It is also, of course, pretty catchy.