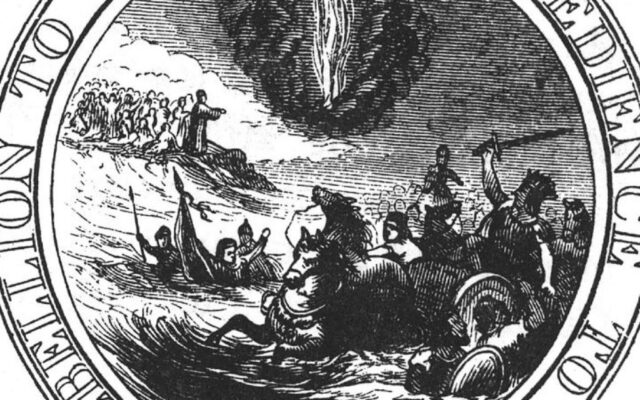 There will be no cream cheese on matzah sandwiches eaten out of Ziploc bags at Six Flags Great Adventure this year. Hol ha-Moed, the intermediate days of Passover, usually a Semitic Spring Break of sorts for many Jewish parents and children taking off from work and school the length of the eight-day holiday, is missing its usual wheel-spinning activity – whether of the Ferris variety or those of next year’s Fiats and Fords at the NY Auto Show, which would normally be held at NYC’s Javits Center, instead now serving as a makeshift hospital. Foregoing the Passover privileges of years past, we instead find ourselves anxiously awaiting updates on health and resources. While across the globe individuals process how best to survive, physically and spiritually, perhaps a measure of solace can be found in the midst of our social distancing by recalling that throughout the history of the United States, and even during its pre-history, when faced with uncertainty, danger, and personal and communal hardships, Americans have turned to the story of the Exodus for inspiration.

Roughly 130 years after Christopher Columbus had written in his diary of the intimidating physical dangers he and his crew faced, “The rising of the sea was very formidable to me as it happened formerly to Moses when he led the Jews from Egypt,” the Pilgrim William Bradford likened his fellow Mayflower passengers’ journey to “Moses and the Israelites when they went out of Egypt.” John Winthrop, one of the Puritan founders of Massachusetts Bay Colony, compared his departure for New England to how the Lord “carried the Israelites into the wilderness and made them forget the fleshpots of Egypt.” For these men of faith, whose compatriots and communities were plagued by disease, hunger, and harsh physical conditions, the bridge they envisioned through troubled waters was a literal one, the protective path the Lord had cleared for the Israelites through the Reed Sea and wilderness three millennia earlier.

The role of the Exodus in articulating the very idea of America extended through its first citizens’ view of their Revolution and its villain, an “unnatural” nemesis sowing societal disunity. England’s King George III was their Pharaoh. Thomas Paine referred to the British monarch as the “hardened, sullen-tempered Pharaoh of England.” And Minister Elijah Fitch preached in a March 1776 sermon, “The means, that our unnatural enemies have made us of, to bring and keep us under their power and control, are much the same which Pharaoh, Egypt’s haughty Monarch used, and they have as yet had the same effect: Their schemes to oppress, divide, and then subjugate these Colonies, have served to unite our hearts, as one man, to cast off the burthens they have been imposing upon us.” As scholar James P. Byrd has documented, the third-most-cited biblical text during the Revolutionary War was Exodus 15’s “Song of the Sea,” the victorious hymn proclaimed by the Israelites after God had drowned the Egyptians at the Reed Sea – the chapter that has served every year (alas, besides the present one) as the central component of the synagogue Torah reading on the seventh day of Passover. During the Revolutionary Era, the hope for survival in the midst of uncertain chances was that the Lord would once again hear the cries of the oppressed, as He had done in Egypt.

God and Moses’ partnership, was, for early presidents, the model of governmental leadership they hoped to embody. In writing to his beloved Abigail on May 17, 1776 about a sermon that he had heard which featured “a Parallel between the Case of Israel and that of America, and between the conduct of Pharaoh and that of George,” John Adams seems to have pondered his own Moses-like role in America’s freedom, writing “Is it not a Saying of Moses, who am I, that I should go in and out before this great People?” Despite Adams’ affinity for the Exodus story, it was two other Founding Fathers who proposed that the seal of the United States reflect its rootedness in the story of Israel’s redemption. Benjamin Franklin suggested “Moses [in the dress of a high priest] standing on the shore, and extending his hand over the sea, thereby causing the same to overwhelm Pharaoh who is sitting in an open Chariot.” Thomas Jefferson chose the Israelites in the wilderness being led by a cloud by day and a pillar of fire by night, the manifestation of the Lord’s protection against enemies both seen and unseen. After the Revolution’s end, it was George Washington who, in American minds, best represented the hero of the now United States’ founding narrative of deliverance. Pastor Eli Forbes, in his eulogy of Washington, the reluctant leader who led his people to victory over Pharaonic-like tyranny, encapsulated this analogy by referring to the biblical Moses as “the Washington of Israel.”

The abolitionist cause also rested on the broken chains of the ancient Israelite slaves. Spirituals with titles like “Go Down, Moses” and “Didn’t Old Pharaoh Get Lost” were sung by countless cotton-pickers yearning for liberation. Harriet Tubman’s authorized biography appeared under the title Harriet Tubman: The Moses of Her People. And Frederick Douglass, at an abolitionist rally on July 4, 1852, reminded Americans of the responsibility that lay in their freedom by explicitly evoking the Jewish festival, saying “This, to you, is what the Passover was to the emancipated people of God. It carries your minds back to the day, and to the act of your great deliverance; and to the signs, and to the wonders, associated with that act, and that day.” He urged American slaveholders to rid themselves of the “blindness which seems to be the unvarying characteristic of tyrants, since Pharaoh and his hosts were drowned in the Red Sea.” The very Seder ritual itself served as sacred succor for those in uniform fighting slavery. The Jewish Messenger, in 1862, published an account from one J. A. Joel of the 23rd Ohio Volunteer Regiment of a Passover celebration by Union soldiers in Fayette, West Virginia. In it, Joel recalls what seems to have constituted a particularly enthusiastic, albeit unintentional, fulfillment of the Haggadah’s commandment to imagine oneself as if he left Egypt:

We all had a large portion of the [maror] herb ready to eat at the moment I said the blessing; each eat [sic] his portion, when horrors! what a scene ensued in our little congregation, it is impossible for my pen to describe. The herb was very bitter and very fiery like Cayenne pepper, and excited our thirst to such a degree, that we forgot the law authorizing us to drink only four cups, and the consequence was we drank up all the cider. Those that drank the more freely became excited, and one thought he was Moses, another Aaron, and one had the audacity to call himself Pharaoh. The consequence was a skirmish, with nobody hurt, only Moses, Aaron and Pharaoh, had to be carried to the camp…

Transitioning, at the end of his story, from the humorous to the heavenly, Joel concluded, “I doubt whether the spirits of our forefathers, had they been looking down on us, standing there with our arms by our side ready for an attack, faithful to our God and our cause, would have imagined themselves amongst mortals, enacting this commemoration of the scene that transpired in Egypt.”

Following the assassination of Abraham Lincoln, which, as historian Jonathan Sarna has noted, occurred during the holiday of Passover, the Great Liberator was eulogized throughout the country as a Moses-like figure. Reverend J.E. Rankin of Boston lamented, “In Abraham Lincoln God gave us just the man to take us safely through the last stages of the rebellion. But the nation had now reached the Jordan, beyond which were sterner duties… We have passed the Red Sea and the wilderness, and have had unmistakable pledges that we shall occupy that land of Union, Liberty, and Peace which flows with milk and honey.” A few days after Lincoln’s death, his body was laid inside Philadelphia’s Independence Hall directly beside the Liberty Bell and its call to “Proclaim liberty throughout all the land, unto all the inhabitants thereof,” a line from Leviticus delivered by God to Moses during the Israelites’ sojourn in the desert, a promise of freedom for those who would be enslaved in the future. A time in which the very social fabric of America had been torn in two, and countless individuals yearned for liberty from their constraints, was viewed through the prism of Passover.

The modern Civil Rights movement, too, evoked biblical Israel and its successful navigation of anxiety, fear, and constant danger. Then-candidate Barack Obama referred to the “Moses generation” of leaders, including Martin Luther King Jr. and John Lewis, who had paved the path to his presidential campaign.

Thus, throughout American history, the Passover story has served as a timeless and timely source of spiritual sustenance. From the Mayflower to Martin Luther King Jr.’s Moses-like vision of the Promised Land from atop the mountain, to our current moment, its miraculous mix of God’s divine intervention alongside courageous human leadership has enabled anxious eyes to look towards a redemptive future. As Princeton political philosopher Michael Walzer has written, “[m]any men and women, believing in God’s mighty hand, have nevertheless girded their loins, challenged the pharaohs of their own time, marched into the wilderness – and understood what they were doing by reading Exodus… marching through the world to a better place within it.”

This year, our marching consists of staying put, assuming we are not providing crucial medical care and support (may the Lord protect those on the front lines with a pillar of cloud by day and a pillar of fire by night). During what seem to be the current interminably intermediate days, bracketed between nights recalling an ancient salvation and nervously awaiting one yet to come, the tale that has always served as the unifying American story can still, despite our current physical distance, “unite our hearts.”

On the second night of Passover, we began counting the Omer, marking 50 days until the holiday of Shavuot. That holiday commemorates Moses receiving the Torah at Sinai, at which time the nation of Israel, the medieval commentator Rashi tells us, was united as “one nation, with one heart.” Americans, like the ancient Israelites, have survived plagues and hunger. We have navigated uncertain waters and wildernesses. We have made it to the mountain. And we have united around the promise of our land. The sunken wheels of Egyptians chariots were followed by songs of salvation. And we will sing again soon.