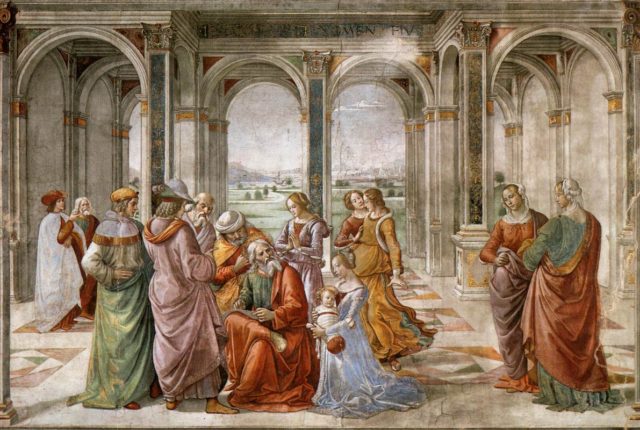 The words of Rabbi Yitz Greenberg, an intellectual mentor of mine, rang in my ears as I began my intensive summer unit of Clinical Pastoral Education[1] at the New York-Presbyterian Allen Hospital: “Judaism is fundamentally about the triumph of life.”[2] I reflected on these words during our group’s orientation, and on the immense holiness Rabbi Yitz sees in contemporary hospital care as an “ultimate fulfillment of the Jewish dream … of the human being becoming more and more like God” (insofar as modern medicine creates miracles of sorts). Thus, when the time arrived to visit patients and provide spiritual care, I entered with the meditation that each hospital room is a sacred space, and that I myself am charged with the sacred responsibility of increasing life.

In classical biblical thought, God’s presence is most acutely felt in the Temple, which provides protection to the encircling camp and staves off calamity (Lev. 26:14). As I started to serve as a chaplain, I began to conceptualize the hospital as sharing a similar goal and function with our description of the Temple—both are institutions standing at society’s core, ensuring our well-being and preservation. Moreover, on an experiential level, both the hospital and Temple are physical sites where individuals search for meaning in their suffering (and occasional joys), and where the precarious balance between life and death is keenly felt. As patients commenced viewing me as a religious guide in this Temple-like context, it made sense to turn towards the Torah’s description of the priest in search of universal truths underlying spiritual care.

Before one enters the priesthood, much like in chaplaincy training, several rounds of initiation are in order, as the former is described in Leviticus chapters 8-10: Both chaplain and priest are adorned with special clothing before beginning (8:7), and learn to scrupulously cleanse themselves before and after entering sensitive areas, adding additional layers of protective clothing when necessary (8:6; 16:24). In their everyday service, both are asked to pray with patients, channeling the divine presence that dwells where patients heal (9:23; Shabbat 12b), and to answer religious questions (Ezekiel 44:23).[3] The first time I entered a patient room at the wrong time, I was struck by the force of an invisible energy indicating I was unwelcome—perhaps a shadow of the Temple’s own strict and zealously-guarded boundaries (10:1-2).

The heart and soul of my chaplain visits was to “reflectively listen” to my patients’ stories and to experience life, to the degree possible, through their eyes. Listening with compassion and mirroring my patients’ emotions—verbally and nonverbally—built trust and allowed for a deeper connection. Once I connected with a patient, I assessed which religious or spiritual needs I might be able to fulfill. Often, my patients carried many unresolved doubts about their lives and turned to me for support, guidance, and assurance. I imagine a similar role being played by priests, such as listening to worshippers’ anxiety regarding their worthiness, as described in Psalm 15 (believed by some scholars to be an “entrance liturgy” before approaching the Temple[4]): “Who may sojourn in Your tent, who may dwell on Your holy mountain?” Finally, above and beyond their routine sacrificial tasks, priests (like chaplains) channel empathy and care to Israelites, particularly in the healing process of the metzora (skin-afflicted individual) as described in Leviticus chapters 13-14.

Without question, my greatest challenge as a chaplain this summer was providing support to critically ill and actively-dying patients, along with their loved ones. There is something about the sounds, sights and smell of the Intensive Care Unit and Emergency Department that stirs my pre-existing anxieties regarding the finality and cruelty of death. In reflecting on these moments, and the notion of death as the archenemy of the Temple (causing, after all, the most severe kind of impurity), I keep returning to Aaron’s ambiguous response, while serving as High Priest, upon learning of the death of his two sons (due to a Temple transgression): “va-yiddom Aharon” (Leviticus 10:3). While this verse is conventionally translated as, “and Aaron was silent,” I wonder if he was silent out of obedience (Rashi), or was he silenced out of shock from standing before a God who is “wholly Other” (Rudolf Otto)? And if Aaron had no verbal explanation for God’s taking of his sons, what can I offer the sisters, brothers, and even parents of recently deceased loved ones?

There is a final element to Aaron’s story worth telling: In verse 19, Aaron corrects Moses’ religious instruction, based on his actual experience as a mourner. Moses, to his credit, concedes to Aaron’s view: “It (the correction) was pleasing in his eyes.” In my brief summer as a chaplain, I encountered many patients experiencing suffering similar to that of Aaron, yet they had no Moses to listen, respond, and adjust their care accordingly. All too often, patients reported being treated as a “medical record number,” as opposed to a full human being with a unique story.[5] I felt worst about this dehumanizing tendency particularly with my patients who had undergone so much suffering in their lives (such as enduring the Holocaust), and who simply deserved better care in the final stages of their lives. Much as we pray for a restored Temple, I wish we could appreciate and care for the “Temples” in our midst.

[1] CPE is an ecumenical training program for chaplains, and is a required element for many clergy students. My CPE unit at the Allen Hospital combined three hundred clinical hours rotating in the hospital’s Spine Unit, Intensive Care Unit, and Emergency Department with one hundred hours of education and group processing. My group consisted of three other seminary students from a variety of religious backgrounds, and was supervised by CPE Supervisor Rev. Joseph M. Collazo of the Presbyterian Church.

[3] While my present reflection is on the similarities between chaplains and priests, this source in Ezekiel undoubtedly calls to mind the overlapping goals between priests and rabbis. For more on this comparison, see Isaac Sasson, Destination Torah (Hoboken, NJ: Ktav, 2001), p. 292.