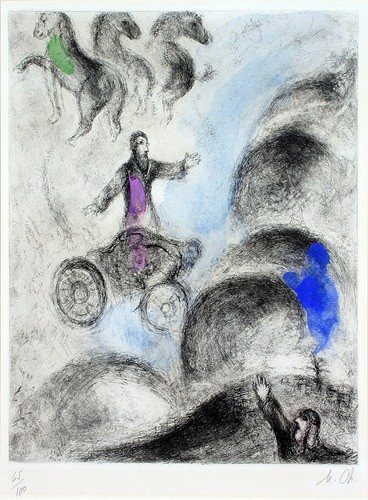 While the Passover Seder is meant to commemorate the Jewish liberation from slavery, it is also permeated by loss. Maimonides’s compendium of Seder conduct emphasizes the absence of an irretrievable past with repeated reminders of how Jews can no longer ideally celebrate the Seder.

Two types of meat must decorate the Seder plate in remembrance of the holiday sacrifices; four questions revised to address a ritually debilitated present when we no longer have sacrifice launch the evening; the participants point to meat signifying the Passover lamb which our forefathers ate at the time the Temple stood; the celebrants recite a prayer anticipating a future when they will once again eat there the Passover sacrifice; the matzah calls for a blessing in the present when there is no longer sacrifice; one prepares a sandwich of matzah and bitter herbs in remembrance of the Temple.[1] The list is unrelenting.

Rather than commemorating liberation, we commemorate how Jews once commemorated it. The obsession with what can no longer be authentically memorialized threatens to overwhelm the core memory of freedom.

Enter the “fifth” cup. If the carefully scripted Seder calls for four cups, why is there a fifth? Its rabbinic origin remains tentative. The standard Talmudic editions, endorsed by Rashi and his grandson Rashbam, two of the greatest Talmudic commentators, cite Rabbi Tarfon, Rabbi Akiva’s mentor, who advocates for a fourth cup to preside over the Seder’s conclusion (Pesahim 118a). However, other major Talmudic experts apparently had a variant of the text that read “fifth.”

Maimonides, for instance, recommends Rabbi Tarfon’s position in his legal magnum opus as the fifth cup, but only as an optional ritual. The cup sits there then, emblematic of the fragility of historical transmission and masorah, disrupting the rhythm of rituals, texts, and prayers designed precisely to preserve Jewish history. It is the Seder maverick, a potent reminder of the vulnerability of memory.

A bewildering myriad of customs prescribing what one does with this cup merely accentuate its questionable character. Is it poured at the commencement of the Seder or when the guests shout out the plea for a pouring of divine wrath on the enemies of Israel? Does one just pour it or drink it as well? Do all the Seder participants partake of it, or just the master of ceremonies? Is it consumed in a reclining position as the other cups? Does it signify a fifth biblical term of liberation that would place it in the company of its sister cups? Or, does it evoke Pharaoh’s cup that instrumentally launched Joseph’s meteoric rise to the upper echelons of the Egyptian hierarchy? How do we even refer to it? Is it the fifth cup or Elijah’s cup?

Tradition identifies Elijah as the one who will resolve moot halakhic debates in that utopian future he is destined to herald.[2] His image itself then signals an enduring question mark. The cup’s indeterminateness inserts an intoxicating ambiguity into the age old rigidly structured gathering characterized as “order.”

Its identity as Elijah’s cup, however, is critical in preventing the celebration from slipping into a morose longing for an era gone by. When Elijah’s time came to die, his beloved disciple Elisha would not let go of his master whom he considered his spiritual father. Exasperated, Elijah finally offered him the potential of surpassing his own prophetic power, on the condition that Elisha witnesses his death— if you see me as I am being taken from you, this will be granted to you; if not it will not (II Kings 2:10).

What this dramatically conveys is that Elijah’s successor/heir needed to accept the end of an era, the cessation of the past, and the impossibility of simply duplicating and parroting his spiritual father. By conditioning Elisha’s future on the capacity to observe his own departure from the scene, Elijah teaches a valuable lesson— that continuity with the past must also be balanced by a sober acknowledgment of its passage.

Elisha, in what surely is the shortest eulogy in Jewish history, laments Oh father, father! Israel’s chariots and horsemen. He has been released by Elijah to shape his own destiny. This tension between generations is described in excruciating honesty by Franz Kafka, one of the most innovative spirits in modern times. In his Letter to His Father, he expresses precisely this suffocating influence of a father who values the son strictly in terms of himself.

As Franz heartbreakingly wrote, “You encouraged me, for instance, when I saluted and marched smartly, but I was no future soldier, or when I was able to repeat songs, singing what I had not understood, or prattle to you using your own favourite expressions, imitating you, but nothing of this had anything to do with my future. And it is characteristic that even today you really only encourage me in anything when you yourself are involved in it, when what is at stake is your own sense of self-importance.” Breaking away was the instrument of Franz’s literary breakthrough. He overcame the stifling parental presence he felt “would simply trample me underfoot so that nothing was left of me.” In contrast to Hermann Kafka’s suppression of any semblance of autonomy by his son, Elijah stages his death so that his ‘son’ could surpass his own prophetic reputation.

The ancient Bnei Brak gathering the Haggadah recalls similarly presents the danger of being engulfed by the past. “It happened once [on Pesah] that Rabbi Eliezer, Rabbi Yehoshua, Rabbi Elazar ben Azariah, Rabbi Akiva, and Rabbi Tarfon were reclining in Bnei Brak and were telling the story of the exodus from Egypt that whole night, until their students came and said to them, ‘The time of [reciting] the morning Shema has arrived’.” Rabbi Tarfon and his colleagues’ immersion in the past was so intense as to reach the point of obliviousness to their own time and the dawning of a new day. Their students, or spiritual children, needed to jolt them back into responding to the demands of the present.

Elijah, the embodiment of ultimate historical redemption, hovers over that fifth cup as a reminder to commemorate the past in a way that enables advancing beyond it. The biblical source for Elijah’s messianic role anticipates far less grandiose achievements than international disarmament and global harmony. The prophet Malakhi entrusts Elijah simply with reconciling the hearts of fathers with their children, and the hearts of the children with their fathers (Malachi 3:24). Elijah’s death scene in his own life’s drama presages the nature of that universal crisis of friction between parents and children Malakhi contemplated.

The greatest source of conflict between generations is a result of parents viewing their children as clones of themselves rather than independent human beings with their own dreams, aptitudes, and aspirations. Like Elijah, they must encourage children to let go. The fifth term of liberation which Elijah’s cup signifies conforms precisely to this notion because it is the only one that places liberation terminology in the context of children as successors to their parents: I will bring you in unto the land, concerning which I lifted up My hand to give it to Abraham, to Isaac, and to Jacob; and I will give it you for a heritage: I am the Lord (Exodus 6:8). The verse records two divine givings, one to the ancestors and one to the descendants.

The parents leave behind a legacy. The children can remain satisfied with what was “given” to the parents or renew a second “giving” by building on the former. The messianic age can never materialize if growth is measured in terms of how closely one generation duplicates the previous one. Elijah therefore reconciles successive generations by warning them that their love for each other does not entail acting as mirrors of each other. To be trapped by the past is to preclude advancing beyond it.

Perhaps this explains why Maimonides concludes his codification of the laws governing the Seder format with a curious addendum concerning venue. In what appears to be a bold contravention of the halakhic protocol that draws the ire of his halakhic opponents, Maimonides grants the prerogative to play the last act out, when the fifth cup accompanies the final Haggadic recitations, “in any place one wants, even if it is not in the same place as the meal” (Mishneh Torah, Laws of Hametz and Matzah 8:10).

Maimonides provides for an independent exercise of will against the background of a strictly regulated format that might all too easily inhibit creativity. The particular dispensation to move out of the narrow confines of the familiar and the standard, to anywhere one might wish, indulges precisely the spirit of Elijah’s cup. Uniform rules and recalling of a common past tend to encourage mimicking and replicating. This fifth cup, released from the weight of obligation, presides over the stage exit, allowing for escape from a restrictive space that can stifle. It expresses itself in the freedom to roam and venture beyond the confines of home, parents, tradition, and past. Elijah’s cup allows the Seder to provoke the kind of independent questioning by the next generation that averts being “trampled underfoot” by the previous one.

[2] The Aramaic term teku, meaning the matter “stands” for rabbinic disputes that cannot be resolved, came to be known as an acronym for “Tishbi [Elijah] will resolve questions and contradictions.”