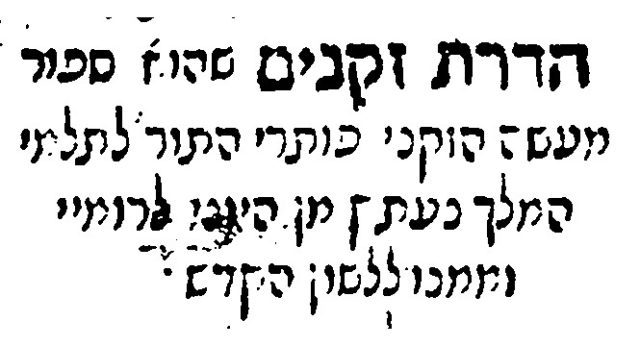 The Letter of Aristeas, composed by Greek-speaking Alexandrian Jews in the second century BCE, remained unknown to rabbinic Judaism until it was translated and published by Italian Jewish Renaissance figure Azariah de Rossi in the 1570s. The question is not what took so long; the rabbis had good reasons to ignore the work. The question is, rather, what drew Azariah to engage with it.

Aristeas tells the story of how King Ptolemy II Philadelphus of Egypt commissioned 72 Jewish sages from Jerusalem to translate the Torah into Greek for the famed library of Alexandria. After bringing these sages to Egypt and posing philosophical questions to them, the king sends them to an island, where they complete the task in 72 days. Upon its completion, it was read in the presence of the Jewish population:

After the books had been read, the priests and the elders of the translators and the Jewish community and the leaders of the people stood up and said, that since so excellent and sacred and accurate a translation had been made, it was only right that it should remain as it was and no alteration should be made in it…. When the matter was reported to the king, he rejoiced greatly, for he felt that the design which he had formed had been safely carried out.

It is from this work that the Greek translation of the Torah—the Septuagint, or Targum Shiv’im—draws its name. Josephus (Antiquities 12:2) cites entire passages of Aristeas, and Philo (Life of Moses 2:7) embellishes it, giving the translators prophetic properties and reporting that the island became a pilgrimage site, where “not only the Jews but a great number of persons of other nations” visit each year to observe a festival, “reverencing the place in which the first light of interpretation shone forth, and thanking God for that ancient piece of beneficence which was always young and fresh.”

Although the earliest accounts of this translation project were overwhelmingly positive, the rabbinic tradition takes an entirely different view. The Talmudim merely note that the translators made changes out of political necessity, but several traditions from the tail end of the Talmudic era view the translation of the Torah into Greek as an unmitigated catastrophe:

“Seventy elders wrote the entire Torah for King Ptolemy in Greek, and that day was as difficult for Israel as the day it made the [Golden] Calf, for the Torah could not be properly translated” (Masekhet Soferim 1:7).

“Rabbi Yehuda La-Levi ben Rabbi Shalom said: Moshe wanted the Mishnah to be written as well, but the Holy One foresaw that the nations of the world would translate the Torah, read it in Greek, and say ‘We, too, are Israel’” (Tanḥuma Vayera 6).

A list of fast days from the Geonic era provides a specific date for the completion of the Septuagint: “On 8 Tevet, the Torah was written in Greek in the days of King Ptolemy, and the world was dark for three days” (codified in Shulhan Arukh, Orah Hayyim 580:2).

Few people, if anyone, still fasts on eighth of Tevet—though I and several other translators are beginning to observe it as a solemn day to reflect on our role—but several piyyutim for the tenth of Tevet make reference to the catastrophic translation of the Torah into Greek. The Letter of Aristeas, like the works of Josephus and Philo, were preserved and even held sacred by Christians. The celebratory attitude toward the Septuagint was completely forgotten to the Jewish people for over a thousand years.[i]

The fate of Aristeas among rabbinic Jews began to change in November of 1570, when the Italian Jewish scholar Azariah de Rossi was forced out of his home by a series of earthquakes that devastated the city of Ferrara. During his wanderings, he was approached by a Christian scholar for clarification on several difficult points in the Latin translation of The Letter of Aristeas. The scholar was surprised to learn that there was no Hebrew version of a work that is so complimentary of the Jewish Bible. Over the following three weeks, Azariah produced a Hebrew translation of Aristeas, which he called Hadrat Zekenim. Though he was nearing 60 years of age and was extraordinarily erudite, this was the first work that Azariah wrote for publication.

It was not his last, though. The floodgates had been opened. Over the next few years, he wrote a chronicle of the Ferrara earthquake (Kol Elokim) and a controversial treatise in which he took a critical approach to aggadic historiography (Imrei Binah), publishing these three treatises as a single work, Me’or Einayim, in 1573.

What was it about The Letter of Aristeas that Azariah found so compelling? What inspired him to take a work that cut against the grain of rabbinic views of the Septuagint, a work that had been all but forgotten by the Jews and preserved only by the Christians, and make it accessible to his Hebrew-reading fellow Jews?

Robert Bonfil offers several reasons why Azariah was drawn to Aristeas. For one, it constituted an admission by classical Greek culture (represented by Ptolemy) and Christianity (which preserved the work and considered it sacred) that the Jews held the original, authentic Bible and had access to its true meaning and wisdom. For a persecuted people—it had been barely a year since the expulsion of Jews from Bologna, and the Talmud had been burned publicly in several major Italian cities in the 1550s and 1560s, not to mention that Jews expelled from Spain constituted a significant part of Italian Jewry—such a work had great apologetic value.

Moreover, Hebrew language played an important role in the two great movements that were transforming Europe at the time: the Renaissance and the Reformation. The Renaissance, as its name indicates, was perceived as a recovery and renewal of lost grandeur, a rebirth after a long, dark age. There was a return to Greek and Latin classical culture, but also to Hebrew.[ii]

In Italy and the Netherlands, Renaissance scholars studied Hebrew with Jewish or apostate tutors, attempting to gain access to Jewish texts—far more than just the Torah—without the mediation of translations or interpretations. The Reformation, already in its earliest years, rejected any supreme authority on Christian faith and practice other than Scripture itself: Sola Scriptura. Here, too, the ability to access Hebrew Scripture—the Scripture read and interpreted by Jesus himself—became a valuable skill. Of course, Catholic scholars would themselves return to Hebrew Scripture to defend their doctrines, cannons, and interpretations.

This emergent phenomenon, which came to be known as Christian Hebraism, required Jewish manpower, and indeed, fifteenth and sixteenth century Jewish scholars like Elijah del Medigo, Elijah Levita, Barukh of Benevento, and Jacob Mantino found employment teaching Hebrew to Christians and translating Hebrew works into Latin and other European languages. That is, they were playing a role similar to that of Ptolemy’s seventy sages. Azariah too, we have seen, was approached by a Christian scholar seeking to clarify the meaning of Aristeas by consulting the (non-existent) Hebrew version.

Like the Septuagint, these new works were being assimilated into vast repositories of knowledge, old and new. A New World was being discovered, mapped, and colonized. A generation earlier, Paracelsus and Copernicus revolutionized the way that human anatomy and the solar system, respectively, were observed and studied. And, of course, knowledge was more accessible than ever thanks to the rise of print.

But Azariah was not just the analogue of Ptolemy’s sages; he was also their mirror image. They translated Hebrew into Greek; he translated their story from Latin into Hebrew. They brought the Torah to the famed Library of Alexandria; he brought books and knowledge from the vast repositories accessible to him and embedded them in a rabbinic work. And indeed, he cites from a dizzying range of sources, classical to contemporary, from outside the Jewish tradition.

Knowledge, during the Renaissance, was becoming mobile. Works that had been the exclusive preserve of a particular group were becoming part of the cultural assets of all humanity, while those collective cultural assets were being imported to particular groups as their scholars reconsidered the meaning of the old books in their light. Azariah was an agent of that mobility and mutual permeability, bringing Jewish texts “out” to the world, and bringing outside texts “in” to Judaism. It is possible that nothing represents this interpermeability better than Hadrat Zekenim—the Hebrew translation of a Latin translation of a Greek work about the translation of the Hebrew Bible into Greek.

[i] For a fuller treatment of early Jewish responses to the Septuagint, see Moshe Simon-Shoshan, “The Tasks of the Translators: The Rabbis, The Septuagint, and the Cultural Politics of Translation,” Prooftexts 27 (2007): 1-39.