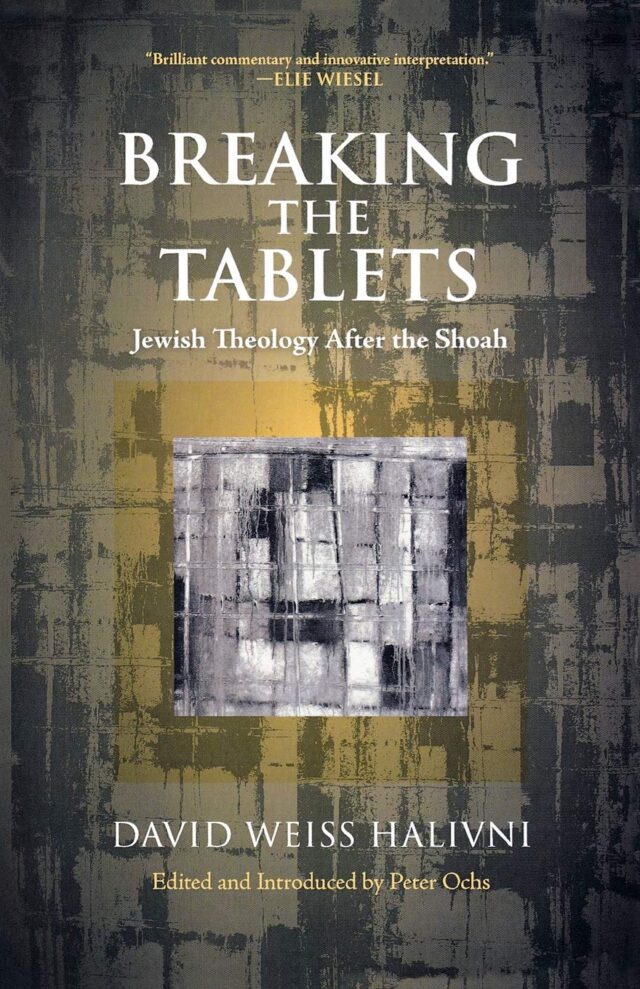 Editor’s Note: We are running a number of pieces for the sheloshim of Professor David Weiss Halivni z”l. For Elli Fischer’s introduction to the symposium, see here.

At the end of the semester in which I served as Professor David Weiss Halivni’s teaching assistant at Columbia University, he called me into his office. He was agitated about an email he had received from a student, who was complaining about the B+ grade she received in his class and asking him to raise her grade.

“This is a serious problem!” Professor Halivni said. “We need to raise her grade!”

Having graded this student’s papers, I was far more skeptical. The student had produced lousy work, I insisted; a B+ was more than generous. I started poking holes in the logic of the arguments she had made in her email.

“Let’s raise her grade,” he declared. By way of justification, he told me a story. Anyone who knew Professor Halivni can imagine how he told it, with a broad smile and a twinkle in his eye:

A certain rabbi was known to be especially lenient on the topic of treifot, rulings about whether an animal with a defect could still be considered kosher. His rabbinic colleagues disapproved of his leniency and demanded that he explain himself. He told them: “If I am too stringent, the butchers will be mad at me for causing them to lose income. If I am too lenient, God will be mad at me for causing people to eat forbidden meat. I know that God is merciful, so I’d rather take my chances with God than with the butchers!”

There was no way I could respond to that, so the matter was settled and the student’s grade was raised.

How does an illuy (Talmudic genius) from Sighet, a man who dedicated his life to sitting in front of holy books, make sense of the world of academia? Well, here’s one way: using the traditional means of the mashal, the parable. And if it turns out that grade-grubbing students are butchers and the university administration is God, then so be it.

Was David Weiss Halivni an academic talmudist? The questions he asked, about how and when the Talmudic text came to be the way it is, were questions typically asked by academics. But the skills and the tools he used to reach his answers were skills and tools from the world of the Beit Midrash.

Professor Halivni’s work relied a great deal on his intuition of how the Talmud was supposed to look and sound, which was an intuition that came out of a deep and intimate knowledge of the Talmudic text. Professor Halivni had the whole Talmud memorized, a feat that is admired in the yeshiva world, and not especially prioritized in academia. He had deep knowledge of the Talmud’s commentaries, which also informed his work.

One semester, when I was studying Bava Batra with Professor Halivni, I happened to also be studying the same chapter in a different academic Talmud course I was taking. The differences were striking. While the other professor made reference to the work of other scholars, Professor Halivni mostly discussed the Talmudic text itself and how he thought it should be carefully read. In both classes, one unique phrase that appeared in the chapter became a topic of conversation. In the other class, the professor brought in a printout from the Bar Ilan database of all the other times the phrase appeared in the Talmud, which we used in our analysis. In Professor Halivni’s class, when we reached the phrase, he began citing from memory the other places in the Talmud where it appeared.

Now that we have machines that can search the Talmud for us, has memorization become merely a party trick? At times it felt that way. But Professor Halivni’s abilities extended far beyond what machines could do. As one of his sons mentioned in his eulogy, Professor Halivni couldn’t just tell you all the places it appeared in the Talmud. He could also tell you all of the times the phrase was said by a third generation amora. In a world that increasingly deemphasizes memorization, Professor Halivni used his old-world knowledge and skill to reach new conclusions.

Professor Halivni was certainly capable of typical academic work. He knew all the scholarship and published some standard academic books. But his main life’s work, his Mekorot u-Mesorot, was a hybrid work that in many ways looked more like something you would find in a Beit Midrash, with traditional rabbinic language and copious references to rishonim, than like something you would find in an academic library.

In his own courses, both the graduate seminar and the undergraduate courses he taught, Professor Halivni was revered and admired. But in the Religion Department at Columbia University, he often seemed out of place. When he was asked to teach the Judaism portion of our graduate student world religion survey course, he walked in the first day and opened the class by writing the date of Yetzi’at Mitzrayim (the Exodus from Egypt) on the board. This is not what academic Jewish studies usually looks like, and the students did not know what to make of him.

The atmosphere in the Columbia Religion department was chill: graduate students were expected to address professors by their first names. I always felt uncomfortable when other graduate students addressed my teacher as “David.” To me he was always Professor Halivni. I never addressed or referred to him as “Rabbi Halivni,” like my friends at his shul did, but calling him by his first name seemed completely inappropriate, as he was more of a rebbe than a professor.

A Yeshiva for Everyone?

While Professor Halivni’s Talmud seminar was an academic course, with papers to write and grades at the end, it was also, or perhaps primarily, a gemara shi’ur, with a revered talmid hakham serving as the magid shi’ur. But typically, the highest level gemara shi’urim take place in yeshivot, and thus are only open to a narrow subset of typically Orthodox male Jews. Since Professor Halivni’s gemara shi’ur took place in a university, the criterion for entry was completely different.  While most of the students were indeed Orthodox Jewish men, the seminar was also attended by women, Jewish students of varying degrees of religious observance and affiliation, and occasionally also by non-Jewish students.

One semester when I was in the seminar, another student in the class was a brilliant non-Jewish graduate student who was not even specializing in Talmud; her specialty was the New Testament, and somewhere along the way she had picked up some impressive Talmud skills. Professor Halivni made her feel welcome in class and was especially pleased when she would engage in Talmudic debates with him.

Professor Halivni truly enjoyed and appreciated the diversity of his students. And for female aspiring Talmud scholars like me, his shi’ur presented a unique opportunity: probably the highest level gemara shi’ur in the US that was open to women.

While Professor Halivni is known to have left the Jewish Theological Seminary when they began ordaining women, I always knew him to be supportive of, and enthusiastic about women’s Talmudic scholarship. From the beginning of our time together he made it clear to me that he believed me capable of making a serious contribution to Talmud scholarship. He would encourage me to work towards writing a critical edition of a rishon (medieval Talmud commentary), which would be important enough that traditional yeshivot would need to have the book on their shelves. He would speculate that if this happened, the rebbe’im at the yeshiva would look at the name on the book cover and explain to themselves that surely it wasn’t “Channa” (a female name) who wrote this important book; it must be “Chuna” (a Talmudic male name).

Professor Halivni combined the intensity and passion of yeshiva learning with the critical rigor and pluralism of the university. In my conversations with him it appeared that he enjoyed this combination and was pleased to be able to teach Torah to a diverse audience. And I know that I, along with countless other students, benefitted so much from this lucky combination.