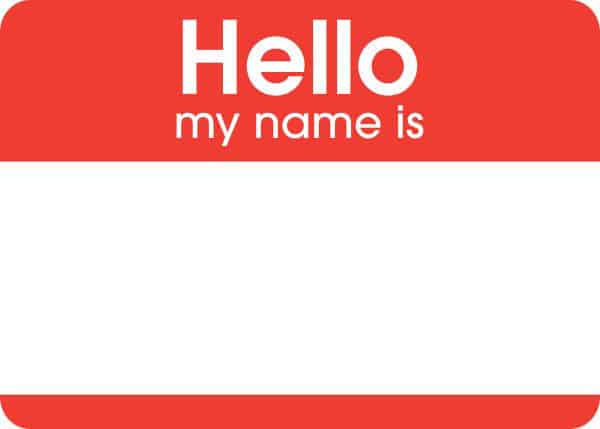 1. What is Moshe’s father’s name?
2. What is the name of his mother?
3. His foster-mother?
4. The Israelite whose life he saves?

Well, you won’t be able to.

…. And we call this book Shemot!

Even reading “Moshe” as a proper name may itself be a misnomer.  Commentaries have long been troubled how an Egyptian princess could grant Moshe a Hebrew name, let alone one with a Hebrew pun as its explanation (“and she called his name moshe, for she said, from the water meshitihu, I drew him out”, 2:10).   One contemporary suggestion (here’s an example) is that “Moshe” derives from the Egyptian verb m.s.(w)., meaning “to give birth, to bear”, or from its related noun, “a child, a son.”  Think: Ramses, meaning “child of the deity Ra” or possibly “Ra-god is now born”.  In this view, Moshe basically means “child”, and the English name equivalent isn’t “Drew” but “Sonny”. As such, Moshe is the ultimate generic label, not too different from the “son” (2:2), “child,” (2:3, passim) and “lad” (2:6) referents employed across the chapter’s first half.  (The Egyptian princess’ explanation of the name now makes sense as a gesture of parental ownership, not as a pun on the Hebrew word Moshe: “and she called him Sonny, for she said, from the water I drew him out!”)

The faceless anonymity that Moshe carries in his own name and encounters in those around him continues deep into his adult life.  He goes out to “his brothers”, where an “Egyptian man” is striking a “Hebrew man” (2:11). The next day, “two Hebrew men” are brawling, with “the wicked one” striking “his fellow”, and Moses soon fears being reported to “Pharaoh” (2:13-15). He flees to Midian, where the “priest of Midian” has seven “daughters,” who clash with the “shepherds” (2:16,17).

The pattern of unnamed characters is clear. But what is its purpose?

Exodus 2 is the story of Moshe the Stranger. Shuttled between two mothers, he is a son to none; lost between classes, he enjoys neither the comradery of slaves nor communion of royalty; a protector of Israelites who would rather see him maligned, Moshe holds the trust of no one.  “I was a stranger in a strange land” (2:22), Moshe tells us towards the close of the chapter, as he looks back at the earlier years of his life. But we already knew that. We followed Moshe from nameless “father” to nameless “mother” to nameless “daughter” of nameless “Pharaoh” as he encounters nameless “Egyptians” and contends with nameless “Hebrews” and as he turns side to side to discover “no man”.  We too felt that strangeness in the very act of our reading, as we lived ever so briefly in a text with no names.

Thus the healing transformation of Moshe’s homelife in Midian.  After all the years, all those blank faces, a stream of names rushes open before him.  The “priest of Midian” becomes Reuel (2:18), from the “the daughters” he weds his wife Tzipporah (2:21), and Moshe bears a son, for whom he immediately offers a name (2:22). In the next chapter, God instructs Moshe to give up this newfound home – this land of Tzipporah, Reuel, and Gershom – and return to nameless Egypt. We can understand Moshe’s stubborn objection to this new mission (cf. 3:11,13; 4:1,10,13); yet we also grasp why that resistance suddenly melts away when Moshe is told that there, in Egypt, he will meet his “brother, Aaron” (4:14).

Names mark Moshe’s journey, denoting his initial estrangement from and emergent closeness to his own people. But Exodus 2 is also a national narrative, marked by God’s distance from and then “remembering” of His own People. Exodus begins with the Children of Israel named, tribe by tribe, before a God that provides them power and protection in Egypt. When a new Pharaoh arrives and the Select become the Slaves, the names disappear. As Jewish children are murdered, there are male infants, birthing mothers, and heroic midwives, all unnamed; as Jewish bodies writhe under the lashes of oppression, there are Hebrew slaves, Egyptian taskmasters, and Pharaonic counselors, unnamed too; even God remains “Elokim,” the generic phrase for any deity.  Only at our chapter’s close does God hear His people’s groans, see the Children of Israel, and remember, in a sudden spurt of names, His covenant “with Abraham, with Isaac, and with Jacob” (2:24).  God again calls His children by their name (2:25) and, in return – as the chapters of slavery shift into the chapters of Redemption – a strange, ineffable word finally appears for the first time (3:2,4,7) in the Book of Exodus: God’s Name.