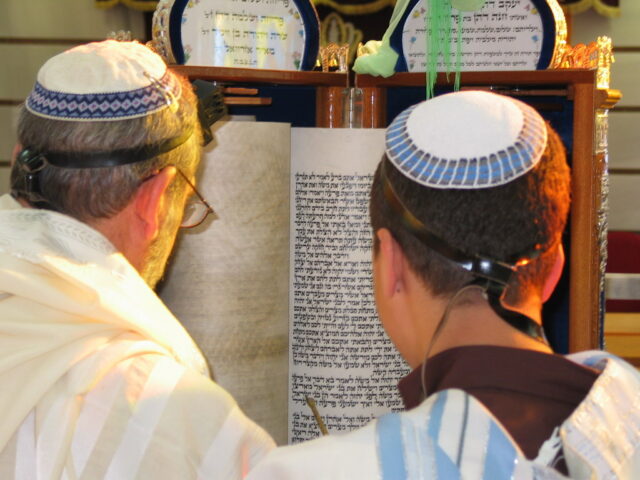 The Modern Orthodox community heaved a sigh of relief when R. Hershel Schachter recently ruled that there would be no requirement to make up missed Torah readings due to the coronavirus pandemic once it is safe to return to synagogue.[1]

In a situation where the COVID-19 pandemic has prevented a bar mitzvah boy from reading the parashah he had prepared in advance, R. Schachter writes in his responsum that the congregation may allow the boy to read his portion from a second Torah scroll. However, he permits this on the condition that the congregation is willing to forgo the consequent tirha de-tzibbura (imposition on the congregation’s time).

We will explore two ideas: First, R. Schachter’s premise is that a tzibbur (congregation) is granted the halakhic prerogative to “be mohel”―that is, to forgo or waive a breach of tirha de-tzibbura. We will first present a contrary school of thought, which argues that the congregation does not have the ability to waive tirha de-tzibbura. We will subsequently argue that this stringent position can be reconciled with R. Schachter’s lenient premise permitting mehilah (the act of waiving the breach). Second, after proving that a tzibbur has the prerogative to waive a perceived tirha de-tzibbura, we will briefly explore whether the congregation ought to waive the tirha de-tzibbura of allowing a bar mitzvah boy to make up his parashah upon returning to the synagogue.

The mishnah in Yoma (68b) states that on Yom Kippur, upon completing the readings from Leviticus, the High Priest would read the passages from Numbers by heart before the congregation gathered at the Temple. The gemara in Yoma (70a) explains that this was to keep the people from waiting idly while the Torah was being rolled, which would constitute a violation of kevod ha-tzibbur, the dignity of the congregation. The assumption of Ritva (70a s.v. lefi) as well as Rambam (Laws of Prayer 12:23) is that the term kevod ha-tzibbur is the positive formulation of tirha de-tzibbura; thus, the two are interchangeable.

There are a number of answers to this quandary,[2] but the approach that concerns us is that of Magen Avraham (Orah Hayyim 144:7), who asserts that in principle there is no distinction between the nature of the Torah reading in the Temple and the Torah reading in a typical synagogue. However, “all of Israel” was present at the Temple, whereas a typical synagogue would only have a small slice of the population (composed of individuals we can assume are interested in fulfilling the mitzvah of Torah reading in the optimal manner). Therefore, we can assume “u-mistama mohalin al kevodam,” that the congregation of a regular synagogue is presumably willing to waive its dignity and allow for the Torah to be rolled at the expense of their time. Putting aside whether Magen Avraham’s assumption about what a typical congregation desires is accurate, it is clear that in principle, he believes that a tzibbur has the prerogative to forgo a breach of its kavod (dignity) by allowing the imposition of a tirha.

While Magen Avraham would form the basis of R. Schachter’s premise that a congregation may waive a violation of tirha de-tzibbura, there remain a number of authorities who ardently disagree with this assumption, including Bach, whose position we will outline below.[3]

Beit Yosef (Orah Hayyim 53) addresses a case where a child is already bar mitzvah and technically permitted to serve as a shaliah tzibbur (prayer leader). However, if the child does not show obvious signs of physical maturation it would constitute a breach of kevod ha-tzibbur for him to lead the prayer. Beit Yosef cites Rambam, whom he interprets as permitting the congregation to forgo their dignity by allowing the child to become the shaliah tzibbur. However, this characterization of Rambam is rejected by numerous authorities such as Bach (Orah Hayyim 53:2), who offers a scathing repudiation of any suggestion of mehilah in this case:

In my humble opinion, even according to Rambam and Rashba, the tzibbur would not be able to forgo [their kevod ha-tzibbur]. For the reasoning behind kevod ha-tzibbur is not that there is an affront to the community’s dignity before their fellow men – in which case mehilah would be effective. Rather, their explanation is that it is not becoming of the congregation to appoint someone who has not yet grown his beard before Him [God] may He be Blessed. For if we would not send him to advocate before a king of flesh and blood, (even if he was a wise and great person but is lacking the stature and appearance of one with a filled beard) then certainly before the King of kings Blessed be His Name mehilah would not avail the congregation to appoint him [as their prayer leader]!

It would seem that we have a major dispute between Magen Avraham and Bach. If we follow Magen Avraham, the congregation would have the prerogative of waiving the tirha de-tzibbura of a child reading his bar mitzvah parashah in addition to the reading of the current week. However, if we were to adhere to the reasoning of Bach, the same way the congregation may not waive their kevod ha-tzibbur to appoint a bar-mitzvah-aged boy as their established shaliah tzibbur, they also do not have the prerogative to allow a boy who missed his bar mitzvah to impose on the time of the congregation to make up for his missed parashah.

However, it may be suggested that R. Schachter’s case is not analogous to the case addressed by Bach, and thus even he would concede that the congregation may permit a bar mitzvah boy to append his prepared parashah to that of the current week.

We can conclude that it is debatable whether a congregation is permitted to appoint a child who lacks physical maturation as their shaliah tzibbur, as it may constitute a breach of Kavod Shamayim. However, in the case of a bar mitzvah boy who wishes to add his parashah to the current week upon returning to synagogue, even Bach would agree with Magen Avraham that the congregation may opt to allow it, as the only concern is that of tirha de-tzibbura.

It should be emphasized that while the congregation may permit the bar mitzvah boy to add his parashah to the current week, R. Schachter does not weigh in on whether the congregation ought to do so.

Perhaps some of the literature on the parameters of tirha de-tzibbura can offer us direction: Peri Hadash (Orah Hayyim 112) castigates those who “act more zealously than the Sages of the Talmud”’ by adding piyyutim (non-obligatory liturgy) to the already lengthy Shabbat morning service. R. Yaakov Emden in his Responsa She’eilat Ya’avetz (1:64) offers a similar condemnation against the addition of mi shebeirakh petitions during Torah reading. One may be tempted to scoff, as an additional mi shebeirakh only takes a minute of the congregation’s time. However, Gra, commenting on Shulhan Arukh (Orah Hayyim 139:4), explains that in order to prevent tirha de-tzibbura, a man who is called up to the Torah should leave the Torah scroll open instead of closing and re-opening it when he is ready to read. It is evident from this position that Halakhah is concerned for even the few seconds of time that it would take to open and close a Torah scroll!

Additionally, Rashba addresses a case in his Responsa (1:115) where the congregation is up to Torah reading (which requires the participation of a kohen if one is present), but the only kohen present is in the middle of a prayer that may not be interrupted. Rashba rules that the congregation should give the kohen’s reading slot to someone else, because the honor of this one individual―even if he is of priestly descent―may not infringe on the time of the congregation.

Based on these sources, there is certainly a basis for the tzibbur to refrain from permitting a bar mitzvah boy to add an extra fifteen to twenty minutes of synagogue services, as his needs do not supersede the needs of the rest of the congregation. While this logic could in theory be extended to prevent a bar mitzvah boy from reading on his actual Shabbat, it would seem that there is a concept of implied custom within each synagogue,[5] and the accepted standard within a typical community is to waive the tirha de-tzibbura caused by the additional pomp and circumstance of a life-cycle celebration.

Practically speaking, every synagogue must find a balanced solution whereby they recognize the families who unfortunately could not celebrate their important milestones while at the same time giving due deference to the dignity and time of the congregation as a whole.

What Does Pursuing Tzedek Actually Entail?