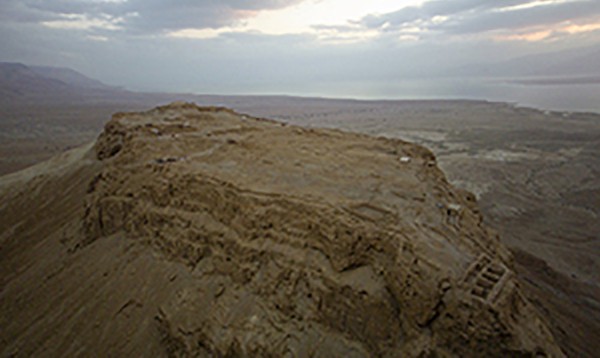 Rashi’s first comment on the very first verse in the Torah might be the single best-known bit of Torah exegesis. Aside from being the opening words of the greatest commentator, it explicitly asserts the God-given right of the Jewish people to possess the Land of Israel. Given the unceasing attempts to delegitimize the State of Israel and deny the connection between the Jewish people and the Land of Israel, it is not surprising that the imagined conversation between Israel and “the nations of the world,” who accuse it of thievery, resonates deeply. Finally, for believers, the uncomplicated notion that “God gave us this land” justifies Jewish possession, at least internally, without having to address questions of historical claims.

However, a line-by-line reading of this Rashi and the texts it cites shows that it is not as uncomplicated as it first seems (Rashi’s words in bold):

Rabbi Isaac said: The Torah should have commenced with “This month shall be unto you the first of the months” (Exod. 12:2), which is the first mitzva commanded to Israel. Why does it begin with creation?

If the Torah is a book of laws, why doesn’t it begin with the first law? Fans of Robert Cover are delighted with Rashi’s incipient recognition that a normative system must be embedded within a narrative that justifies the law.

Because “He told His people the power of His works in order that He might grant them the possession of the nations” (Psalms 111:6).

God told His people about creation (His works) so He would be established as the world’s owner, free to parcel out lands at His whim. As Ramban points out (and Stephen J. Fraade, reading Rashi in view of Cover, echoes), this answer explains why the Torah includes an account of creation but not why it includes the remaining 48 chapters of Genesis and the first 11 chapters of Exodus. However, looking at the verse from Psalms in its original context indicates that Rashi may have been after something else:

He told His people the power of His works,
in order that He might grant them the possession of the nations;
The works of His hand are truth and justice; all His precepts are enduring,
well-founded for all eternity, wrought of truth and uprightness (Ps. 111:6-8)

The “works” (ma’asav) of the first verse are described as truth (emet) and justice (mishpat) in the very next verse. That is, if the first verse refers to creation, then creation itself is charged with a moral dimension. Unlike in other Ancient Near Eastern creation accounts, in the Torah’s account, it was no capricious, morally neutral display of Divine power. The world was created for a purpose, and truth and justice are an integral part of it. The Psalmist then goes on to tie God’s works with His precepts. Like the world itself, they are enduring and wrought of truth (emet) and uprightness (yashar).

It follows, then, that God’s gift of the land to Israel was not arbitrary, but was in view of furthering the goals of truth and justice through the fulfillment of His true and upright precepts. This sounds a lot like a message that is explicit in Deuteronomy (6:18): “Do what is upright (yashar) and good in the eyes of the Lord, that it may be good with you and that you may inherit the good land that the Lord your God swore to your fathers.” Here, the granting of the land is explicitly conditioned on doing what is good and right in God’s eyes.

And what exactly is “good and upright in God’s eyes”? Rashi on that verse explains simply: Making compromises and going beyond the letter of the law. Ramban is more expansive, viewing it as the overarching goal of all the commandments:

Now this is a great principle, for it is impossible to mention in the Torah all aspects of man’s conduct with his neighbors and friends, and all his various transactions, and the ordinances of all societies and countries. But since He mentioned many of them…he reverted to state in a general way that, in all matters, one should do what is good and upright; including even compromise and going beyond the requirements of the law. (Chavel translation)

Here, possession of the land is conditioned on going beyond the letter of the law and embodying the values and virtues—the right and the good—that underlie it.

It is now evident that Rashi’s explanation for the necessity of the whole of Genesis and the beginning of Exodus is not limited to creation, but extends to the stories of the Deluge, the Tower of Babel, and the lives of the Patriarchs. These tales are moral tales that prefigure and shape the values that later become law, and it is for this reason, as Netziv famously wrote, that an alternative name for Genesis is “The Book of the Upright” (“Sefer Ha-yashar”).

For should the nations of the world say to Israel, “You are thieves, because you occupied the lands of seven nations,” they reply: “All the earth belongs to the Holy One; He created it and granted it to he who was right in His eyes. By His will He gave it to them, and by His will He took it from them and gave it to us.”

We can now understand this final statement in a different light. “His will” is no mere whim. “Who was right (yashar!) in His eyes” echoes the verse in Deuteronomy. It has an even closer parallel as well, though, which further demonstrates that Rashi understood Israel’s possession of the land to be contingent upon doing God’s bidding.

At the beginning of the reign of Zedekiah, the last king of Judah before the destruction of the first Temple and the exile to Babylon, the prophet Jeremiah was commanded to deliver a message. It begins, like the Torah itself, with an account of creation, and then, like Rashi, explicitly connects God’s creation to His right to allocate the land as He deems fit:

It is I who made the earth, and the men and beasts who are on the earth, by My great might and My outstretched arm; and I have granted it to he who is right in My eyes (Jer. 27:5).

Though he places the words in the mouths of Israel as they respond to the nations, Rashi’s words are taken directly from Jeremiah. In this context, the next verse is astonishing:

I herewith deliver all these lands to My servant, King Nebuchadnezzar of Babylon (ibid. 6)

In Jeremiah’s prophecy, God’s creation and continued sovereignty over the world is used to justify the dispossession of Judah and the granting of its lands to Nebuchadnezzar!

In truth, the theology underlying Rashi’s comments should not surprise us. The Torah, and the Talmud and Jewish liturgy in its wake, is filled with promises and threats that tie possession of the land to fulfillment of the commandments and dispossession and exile to transgression and punishment. “Due to our sins, we have been exiled from our land.”

In fact, it is the “straightforward” reading of this Rashi that goes against the grain of the Torah’s theology—though, to be fair, it too has biblical precedent—in the person of Jeremiah’s rival, Hananiah ben Azzur, the false prophet (Jer. 28). Complacency, however, is the very last sentiment Rashi would have us derive from the Torah’s first verse