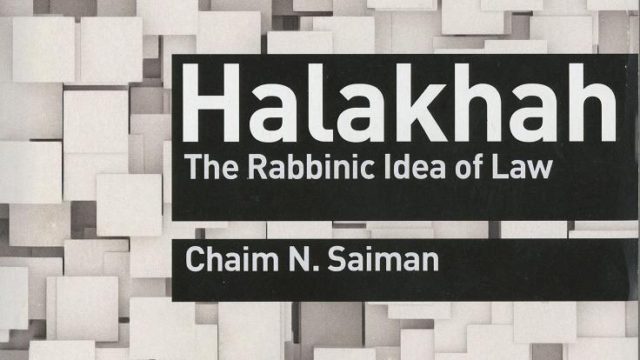 EDITOR’S NOTE: Few recent publications have stimulated such extensive conversation about the nature of halakhah as Professor Chaim Saiman’s Halakhah: The Rabbinic Idea of Law. In that light, over the course of the coming week, we look forward to featuring a range of reviews from prominent thinkers and community leaders, who will explore Saiman’s work from philosophical, sociological, legal, and educational perspectives. Other reviews in this series are by Suzanne Last Stone and Shmuel Hain.

The story is told of a well-known professor of Jewish Studies who, when asked if he had read a certain book written by a colleague, answered, “Read it? I haven’t even reviewed it!” So, for the purpose of full disclosure, I confess that I’m biased with regard to Chaim Saiman’s book on Halakhah because I’ve read it (or at least most of it – obsessiveness is no virtue). To cut straight to the bottom line, I like it, even a lot. I like it not because it has lots of clever ideas (it does) or because it is well-written with lots of illuminating examples (it is), but for a different reason altogether, having to do with its implicit purposes.

Here’s what I regard as its primary purpose: it is an attempt to explain to non-experts, even non-Jews, who have some understanding of legal systems and some respect for religion (for specificity, I’ll call this reader Robby George), what Halakhah is all about and how it’s different from the kind of legal systems they’re used to. Saiman does a fine job of this – I’ll dig in a bit below – but that isn’t the main reason this book is satisfying.

What makes this book unique is that almost everybody who has ever tried this, or similar tasks, has yielded to one of two temptations. The first is the temptation to apologetics in which every one of Halakhah’s idiosyncrasies, in comparison to the material someone like Robby George is accustomed to, is burdened with profound meaning that demonstrates Halakhah’s superiority. The second is the temptation to reverse apologetics in which the writer distances himself from Halakhah’s idiosyncrasies, as if to suggest that the halakhists under his knife were unreflective products of the ideological biases of their times, whereas the writer himself has magically achieved the view from nowhere.

Saiman yields to neither of these temptations. His explanation of Halakhah is unflinchingly honest, but without apology or arrogance. He explains in straightforward terms that Halakhah is often not especially practical. He notes rather dispassionately that halakhic texts, including codes that look like they actually mean business, often include discussions regarding what Halakhah has to say about a bewildering assortment of impossible cases. It includes regulations that are not now enforceable and never will be. It also includes regulations, like the standards of evidence required to prosecute criminals, that are theoretically implementable, but only at the price of total chaos.

The key point, as Saiman puts it, is that Halakhah slides back and forth along an axis connecting two poles: the pole of theoretical Torah study as a devotional act and the pole of regulation as part of an applied legal system. In the first part of the book, he focuses on the ways Halakhah tends to drift away from the latter pole, both in terms of its lack of relevant institutions and in terms of widespread disinterest in contending with impediments to its application. In the second part, he offers a number of helpful readings of selected sugyot to illustrate these points.

In the third, and final, part of the book, Saiman considers a number of topics that highlight the ways in which post-Talmudic literature moves along the axis between law and devotional study. He traces the development of distinct genres of literature – principally novellae, codes, and responsa – that reflect different segments along this axis. The Sefardic tradition initially emphasized practical Halakhah, as well as non-halakhic material, while the Ashkenazi tradition emphasized Halakhah as fodder for lomdus, study for its own sake. Eventually, this distinction softened and sometimes was even turned upside-down, as Maimonides’ code became a favored basis for lomdus and Tosafot’s lomdus became a basis for practical rulings. The former trend reached its apotheosis with the Briskers, to whom Saiman devotes an entire chapter.

Saiman’s chapter on Brisk demonstrates very clearly his restraint and fairness. Drawing on several examples of the Brisker method and citing the somewhat idealized analysis of this method in Rav Soloveitchik’s monograph Halakhic Man, Saiman dryly notes that for Briskers, Halakhah crowds out other forms of human expression; that Briskers view all of reality only through a halakhic lens; and that they describe this reality using a private language of their own invention. If he is aware that he’s describing some rather glaring eccentricities, Saiman keeps a perfect poker face throughout. To his credit, he doesn’t even feel the need to balance out the picture, as has become the custom, by trotting out tales of the warm and fuzzy Reb Chaim down on the floor giving the grandchildren piggy-back rides.

Having said all that, I do have to fulfill the reviewer’s duty to nitpick or, at the very least, to peddle my own theories at the author’s expense.

A key organizing principle of the book is the comparison of Halakhah with law. Saiman notes at the outset that Halakhah is less than law in that it is neither legislated nor enforced by state institutions and hasn’t been for at least two millennia. He also notes that it is more than law in that it engages its adherents much more thoroughly and intensely than a legal system engages its subjects; no layman goes to hear a lecture on financial regulation, though many go to shiurim on Bava Kama. All this is quite obviously true. In fact, this argument is so convincing that it suggests that, if one wishes to explain Halakhah to the uninitiated, perhaps law is not the most apt basis for comparison.

The correct basis for comparison, in my opinion, is a system of social norms, the set of informal rules that, though not enforced by any official bodies, govern our lives much more thoroughly than do laws: how to dress for the occasion, where to stand in conversation and what to say, when gifts are required and what is an appropriate gift, to whom to show deference and how, table manners, workplace interactions, phone etiquette, dating rules, and on and on.

Halakhah is a lot more like a system of social norms than like a system of law, along all the dimensions that Saiman mentions. Apart from the fact that such norms are neither legislated nor enforced by the state (for my purposes, by definition), they also engage people in much the way Halakhah does. The literature on social norms includes codes (Emily Post and wannabes), responsa (agony aunts and self-styled ethicists in newspapers) and learned novellae by legions of academics. And if people don’t often flock to lectures on the ins and outs of social norms, it’s only because such lectures are unnecessary. The pop culture they consume, from self-help books to Hollywood movies and TV sitcoms, already consists of thinly-veiled morality tales designed precisely to instruct them in current standards of appropriate behavior and warn them of the consequences of failing to comply.

To be sure, I am not suggesting that Halakhah is simply another system of social norms and nothing more need be said. Obviously, committed Jews regard violating the laws of Shabbat as a more serious matter than belching at the dinner table. My point is only that had Saiman’s basis of comparison been social norms instead of laws, there would be a lot less explaining to do; the comparison would be more natural.

Saiman would no doubt counter that there are important ways in which Halakhah is clearly more like law than like a system of social norms. In particular, as he illustrates at great length, the literature on Halakhah through the generations relates to Halakhah as if it were legislated and enforced, even if in fact the relevant institutions have been in abeyance for a few millennia. This literature typically speaks in terms of the forbidden and the obligatory, rather than of the inappropriate and customary. It sure sounds like law.

Quite right. But this might be true only of Halakhah as it appears in the literature – which is the focus of Saiman’s attention – but not of Halakhah as it is actually lived. In some sense, then, Saiman is simply looking under the lamppost. If you read Emily Post, the fine points of cutlery placement sound like law. The available records of Halakhah are those found in books and Saiman’s picture of Halakhah is drawn from these books. But books are written by a small number of highly committed scholars, who are naturally biased to a view of Halakhah that is more formal and legalistic than that of the bulk of Halakhah’s adherents. For every Reb Chaim Brisker, there were 10,000 ordinary pious Jews who simply kept a kosher kitchen just as they saw their parents do and for whom these practices were sensible and satisfying and involved actual pots and pans, not Platonic ones.

In his introduction, Saiman notes that the great legal scholar Grant Gilmore writes in the concluding paragraph of his book on American legal history that “The better the society, the less law there will be. In heaven, there will be no law… In hell, there will be nothing but law.” Gilmore’s point is that in good societies, social norms suffice; laws are unnecessary. But, because Saiman is locked in on the idea of Halakhah as (sort of) law rather than as a system of social norms, he concludes that “What for the Talmud is heaven, for Gilmore is hell.” I don’t think so. In the Talmud’s heaven, exactly as in Gilmore’s heaven, unenforced social norms are enough, which is precisely why the righteous are free to spend their days in undisturbed study of Torah.

Nitpicks aside, Saiman’s fine book achieves its goal; if I were going to give Robby George one book on Halakhah, this would certainly be it. But I might remind him that it is a book about Halakhah as it appears to the scholars who wrote the books and not necessarily as it has been experienced by the vast majority of Jews who have lived by its rules. He’ll understand.