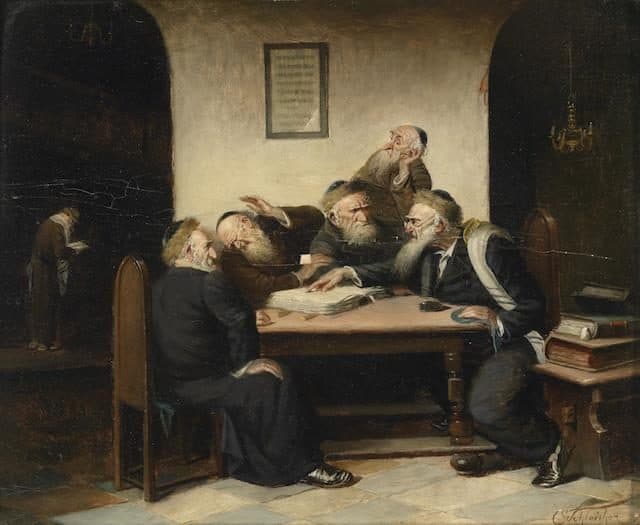 EDITOR’S NOTE: Few recent publications have stimulated such extensive conversation about the nature of halakhah as Professor Chaim Saiman’s Halakhah: The Rabbinic Idea of Law. In that light, over the course of the coming week, we look forward to featuring a range of reviews from prominent thinkers and community leaders, who will explore Saiman’s work from philosophical, sociological, legal, and educational perspectives. Other reviews in this series are by Moshe Koppel and Suzanne Last Stone.

As I read Halakhah: The Rabbinic Idea of Law, Chaim Saiman’s brilliant and rich new book, I found myself thinking about my mother-in-law. More specifically, about her dogged efforts to convince me to become a lawyer. Her essential argument to me was (is?) straightforward: You, my dear son-in-law, love studying Jewish law, so you would undoubtedly love studying American law, too. The prospects of earning a better living? Just a welcome bonus. And so, from the ages of 18 to 27, as I dated, married, and started a family with her daughter, my mother-in-law tried to coax me into pursuing a legal career, or, at the very least, to consider applying to law school.

When I secured my first full-fledged rabbinic position as Assistant Rabbi at The Jewish Center in Manhattan, I was hopeful the law school talk would cease. I was especially confident after I delivered a sermon in front of some five hundred people on my very first Shabbat. Surely now, my mother-in-law would realize that Jewish communal work was the right career choice for me.

As it turned out, my confidence was misplaced. That same Shabbat morning, during the announcements at the conclusion of services, I congratulated a shul member, David Schizer, who had been appointed the youngest dean in the history of Columbia Law School.

After services, I made a beeline to my mother-in-law, and asked for her impressions of the synagogue and of my sermon: “What do you think, Mom? Pretty impressive, no?” She did not pause before answering, “You know, Shmuel. That Dean Schizer is impressive. And now you have a real in at Columbia Law School!”

It is perhaps fitting, then, that Halakhah: The Rabbinic Idea of Law, written by a law professor, has provided a persuasive and panoramic response to what makes Halakhah sui generis. In Halakhah, Saiman argues that Jewish law, unlike other legal systems, is not primarily concerned with regulating conduct, but with the much larger project of talmud Torah. On the regulatory side, Saiman notes that Jewish law has rarely wielded the power to enforce its rules, nor has it ever been the actual law of any state. On the talmud Torah axis of the spectrum, Saiman traces how through its analysis of every detail, Halakhah explores essential questions of philosophy, political theory, education, spiritual guidance, theology, and ethics. Moreover, the study of Halakhah itself was viewed by the Talmudic rabbis as a religious endeavor: Torah study is described as the highest form of religious devotion that can bring a person close to God.

It is worth noting that by broadening Halakhah to include all disciplines, Saiman has restored the original meaning of the word Torah. While the Septuagint rendered torah as nomos, law, giving rise to the distorted view that Torah is unidimensionally and exclusively focused on nitty-gritty legal matters, Saiman shows how multifaceted Halakhah actually is, returning Jewish law into an all-encompassing category synonymous with Torah.

In doing so, this sprawling book, much like its subject matter, contains so much more than what appears on its surface. In the advanced copy I received, the book’s subtitle is “An Introduction to Halakhah.” But this book is much more than an introduction to Jewish law. Each chapter of the book is full of ideas, readings, and perspectives on a wide range of topics (from the Brisker Derekh to the (in)advisability of implementing Halakhah in the Jewish state) that are insightful, enriching, and stimulating.

On top of all of that, the book resonates deeply on a personal level given my own lifelong journey as a student of Torah. Halakhah is written with great passion for the subject matter, and really speaks for and to someone who loves to learn Torah. At long last, it helped me fully understand the richness and depth of halakhic study and even my attachment to talmud Torah. In a word, the book “shows how [H]alakhah is not just law, but an entire way of thinking, being and knowing” (from the book jacket). This gift of self-understanding is a remarkable achievement for an academic volume, even if I may not be able to explain it fully to my mother-in-law.

Which brings me to a lingering question about the book. For scholars of the halakhic system, Halakhah is undoubtedly an invaluable contribution as it demonstrates and articulates the transcendent depth of talmud Torah. But what about its impact beyond these “insiders?” Does Halakhah have utility for adult and high school educators in the broader Modern Orthodox community, and beyond?[1]

To be clear, there are insights in Halakhah which will catalyze the thinking of scholars and laypeople alike. In particular, Part II of the book is filled with close and penetrating Talmudic readings that can easily be adapted for classes and shiurim. But is the book’s larger thesis compelling for, or even translatable to, outsiders uninitiated in and/or not committed to the halakhic system? Or to state it in another way: will reading this book facilitate uninitiated congregants’ and students’ appreciation of the transcendent qualities of talmud Torah?

Saiman himself acknowledges this chasm between the novice and the insider. Especially noteworthy is that Saiman underscores this divide in different directions when it comes to the relationship between the abstractions of Talmud study and our lived realities.

For instance, Saiman, in his autobiographical preface, shares that the original idea for this book can be traced back to his first encounter with the sugya of kiddushei bi’ah – the laws of betrothal via sexual union – as a diligent, tenth grade yeshiva student. When reflecting back on the experience, Saiman writes (page xi), “…advanced students are quickly acculturated to the view that these lofty matters, which exist solely in the zone of analysis, are divorced from time, space, or lived reality (emphasis added).” But later on, in an important chapter entitled “Thinking Legally,” Saiman highlights the real-world quality of halakhic thinking and its resemblance to literature, in contrast to the detached nature of analytic philosophy, “Talmudic thought, like its literary counterpart, resists detached inquiry…” (page 139). (emphasis added)[2]

While these descriptions seem to point in opposing directions, the context of each provides a resolution, which in turn sharpens the “outsider” challenge. In the preface, Saiman is referring to the need for insiders to eschew real-world, baalebatishe questions. In the later chapter, Saiman is focusing on the insider’s manifest sense of commandedness by Halakhah. As Saiman continues in that chapter, “The Talmud simply does not make sense outside of its ‘plot’- the foundational claims of the world it inhabits. These include that God gave the Torah to the Jewish people and commanded them to perform mitzvot. Beyond these foundational beliefs, the Talmud’s arguments are generally inaccessible unless one is already invested in the enterprise of [H]alakhah and its study” (page 139). (emphasis added)

Further on in that chapter, Saiman argues correctly that “the process of framing an issue in halakhic terms both depends on and generates buy-in to the system as a whole.” Even more pointedly, “…the Talmud imparts a claim that is alternately maddening and compelling: that the starting point for human exploration and self-actualization is the fact that man stands commanded to live by God’s Torah” (page 140).

What emerges from these passages is the following sobering realization: only committed talmud Torah insiders are fully capable of accessing the depth of minor halakhic details, thereby tapping into Halakhah in its fullest sense. This is because insiders are both completely attached to the halakhic system as a whole and to the importance of its every minor detail, while simultaneously capable of detached inquiry focusing on the conceptual underpinnings of the law rather than on its real-world practicality. No matter how articulately one expresses the beauty of talmud Torah to the uninitiated or outsider, accessing the depths of Halakhah will remain elusive.

And that’s okay. Because this book is truly enlightening for those who are invested in the study of Halakhah, and especially those who have had significant exposure to the Brisker Derekh. But reflecting on Halakhah reinforced what I have learned in the pulpit and education: to be effective teachers we must encounter halakhic texts from our students’ perspective, rather than our own. Specifically, instead of focusing primarily on the conceptually significant points, we must address the real-world questions posed by our students.

I identify with a story I have heard from SAR High School principal Rabbi Tully Harcsztark on a number of occasions. Rabbi Harcsztark’s friend was studying a masekhet of Gemara with his child in advance of the child’s bar mitzvah. When Rabbi Harcsztark asked his friend how the learning was going, the friend responded sincerely, “It is going a little bit slowly. I find I am having a hard time getting my kid to understand that the Gemara is not supposed to make sense!”

Indeed, the suspension of “making sense of the Gemara” is how so many insiders were trained in Gemara study. But in order to engage all others in the study of Halakhah, we must commit ourselves to really making sense of the Gemara. Halakhah will help insiders deepen their appreciation for transcendent talmud Torah. In order to get more of our congregants and students to engage Halakhah and Torah, there is more work to be done.[3]

[1] For students and scholars of Western jurisprudence and legal theory, Halakhah is also a valuable work as an academically sophisticated overview of Jewish law, highlighting the contrast between Jewish law and other legal systems.

[2] Ilana Kurshan’s recent memoir, If All the Seas Were Ink, is a poignant paean of the Talmud’s literary qualities.

[3] I would recommend that those interested in learning more about the Talmud read Halakhah, along with the aforementioned memoir by Kurshan, as well as Barry Scott Wimpfheimer’s excellent recent volume The Talmud: A Biography. These three works together, in completely different ways, underscore the multi-faceted depth of serious Jewish learning of the Oral Law.