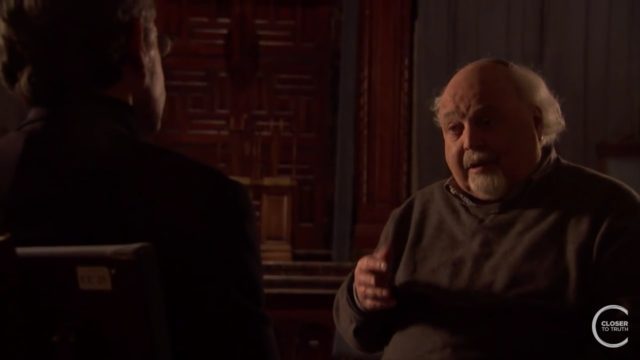 Rabbi Dr. Neil Gillman died on November 23, 2017, having been ill for several years after cancer treatment. Gillman spent his entire career at the Jewish Theological Seminary of America in New York, as the dean of the Rabbinical School and as a Professor of Jewish Philosophy.

This essay is one student’s attempt to articulate an appreciation for Gillman, his contribution to contemporary Jewish theology, and how his work might shed light on the value of the terminology of postmodernism for our own time. In this sense, it contributes to and broadens, I hope, The Lehrhaus’s recent series of articles on Rav Shagar and postmodern Jewish theology.

Gillman’s most significant work of Jewish theology is his 1990 book, Sacred Fragments: Recovering Theology for the Modern Jew. Only a year later, Eugene Borowitz, professor of Jewish theology at Hebrew Union College, the Reform movement’s rabbinical seminary, originally published Renewing the Covenant: A Theology for the Postmodern Jew. A leading thinker of Reform Judaism, Borowitz drew on the discourse of postmodernism in the service of calling for a retrieval of tradition.

Gillman, a Conservative Jew and certainly more of a traditionalist thinker than Borowitz, categorized his own work as modern, yet his approach to theology touches on elements of the rhetoric of postmodernism and religion that was taking shape at that time, even as he did not embrace that particular label. To understand and appreciate Gillman’s contribution, I will discuss some of Gillman’s early philosophical influences, which also point to some commonalities with Borowitz, who himself died under two years ago.

Neil Gillman was born in Quebec City, Canada, and studied philosophy at McGill University in Montreal. While raised in a traditional Jewish home, his path to the rabbinate and a career teaching Jewish theology was inspired with an encounter with Will Herberg, the noted Jewish social thinker and existentialist theologian.

Under Herberg’s influence, Gillman was introduced to the Jewish religious existentialism of Martin Buber and Franz Rosenzweig, both of whom were also major influences for Borowitz. Borowitz and Gillman both understood themselves as working in the tradition of covenantal theology, which emphasized the centrality of a dialogical relationship with the divine.

And for both, the themes of existentialism gave voice to the fact that modern Jews could not  evade the uniquely modern condition of radical individuality in their theological self-understanding. Borowitz’s earliest book was a guide to religious existentialism, and Gillman wrote his doctoral dissertation on the French Catholic existentialist theologian Gabriel Marcel.

The existentialist emphasis on a personal confrontation with personal belief and meaning became one of Gillman’s core commitments, as much or even more in the teaching of theology than in the theology itself. The hallmark of Gillman’s teaching was the crafting of a personal theological statement, a task to which he provided a guide in the final chapter of Sacred Fragments. In addition to being a typical final assignment in almost any Neil Gillman class, under his influence the personal theological statement became and remains a standard part of the application to the Rabbinical School at JTS. Neil’s insistence that modern Jews clarify their own theological commitments in a personal way gave a generation of rabbis, cantors, educators, and lay students the opportunity to discuss their qualms and questions about classical Jewish theology, explore new possibilities, and renew their faith from the “sacred fragments” of traditional images of God.

The individualism at the heart of existentialist philosophy certainly reflects a modernist sensibility. On this point, Borowitz arrived at postmodernism as a corrective to such individualism in Reform Jewish theology, in favor of a greater role for communal norms and rituals rooted in, if not completely governed by, halakhic traditions.  But for Gillman, who was already committed to traditional observance, the centrality of community was a given in his Jewish theology, his existentialist orientation notwithstanding. In this sense, much of Gillman’s theological work, with its twin emphases on community and individual existence, might be best seen as an attempt to reconcile the influence of two of his teachers at the Jewish Theological Seminary, Mordecai Kaplan and Abraham Joshua Heschel.

Kaplan was a pragmatic rationalist and a naturalist theologian who founded Reconstructionism, which eventually broke off from Conservative Judaism. Kaplan’s modern Jewish theology sought to explicitly incorporate the sensibilities of modern science and humanism. He proposed that we think of God as “the power that makes for salvation,” the reality that makes it possible for human beings to achieve flourishing, self-actualization, and social harmony.

Heschel was a traditionalist, the scion of a Hasidic dynasty, and refugee from Eastern Europe who insisted on the continuing power of the personal God of the Biblical prophets and classical Jewish texts. For Heschel, Kaplan represented everything that was wrong with modern theology because it placed God in the service of human needs rather than insisting, as the prophets had, that humanity is called upon to meet the needs of God.

Gillman revered both of his teachers and incorporated their insights into his theology in a way that straddles the modern and postmodern, though Gillman usually stayed away from the terminology of postmodernism or postmodernity. It could be said that Gillman’s head was with Kaplan and his heart was with Heschel, but that requires some explanation.

Gillman followed Kaplan’s theological naturalism because he did not think we could fully retrieve the pre-modern conception of God as a supernatural personal being. At the same time, Gillman understood that for many, himself included, Kaplan’s naturalistic theology did not capture the emotive or spiritual power of lived religious experience, both in traditional Jewish ritual and in the everyday world.

Heschel’s poetic writing and teaching taught him to appreciate the way that the images and metaphors for God in the tradition allowed us to experience the divine within the world, to “see God,” as Gillman often put it in explaining his debt to Heschel. This recognition of the limits of theological naturalism was Gillman’s nod to the postmodern moment. The modernist confidence that new conceptions of God rooted in the sciences would surpass traditional ones, Kaplan’s understanding of God as an impersonal “power” being a prime example, was no longer sustainable as an account for theology.

Gillman’s own understanding of this tension revolved around the philosophical issue of religious epistemology, how we make knowledge claims about God, which was the subject of his dissertation on Marcel. Kaplan’s naturalism suggested that a human community like the Jewish people creates new metaphors and images for God as they evolve and develop.

The problem Gillman saw was that it made it seem like the community could just say that God is whatever they wanted God to be. What was lost here was the debt to the past and the centrality of revelation that Gillman appreciated in Heschel’s thought. At the same time, Gillman did not fully embrace Heschel’s traditionalist theological idiom. Still a naturalist, he insisted that his own view acknowledge the break that modern thinking represented from the past even as he sought to retrieve the treasures of its thinking.

To achieve this balance, Gillman turned to two concepts that his students would typically remember as his unique contributions to their theological education. The first was Paul Tillich’s notion of religious language as mythical, in the sense of “a structure through which a community organizes and makes sense of its experience” (Sacred Fragments, 26).

The concept of myth allowed Gillman to affirm the central role of the Jewish tradition’s classical personal imagery for God in shaping our theology (his heart with Heschel) without having to claim that the tradition itself is rooted in supernatural revelation (his head with Kaplan). Because myth is inherently communal, Gillman’s approach anchors theological claims in the literature of the Jewish past and the communal strivings of the Jewish present.

However, sometimes the classical language of the tradition ceases to be compelling, and these myths become broken. One of the most important parts of Gillman’s teaching was helping students work through their difficulty with certain troubling images for God that were rooted in gender hierarchies or abusive forms of power. But Gillman also counseled that just because we don’t take classical metaphors for God literally does not mean they lose their power.

Here, he looked to Paul Ricoeur’s notion of second naiveté to explain our relationship to these metaphors from the tradition. While the “literal” belief in God as a Parent, Ruler, or Warrior might be untenable to modern Jews, they can embrace a stance of second naiveté that acknowledges their distance from the original understanding of these images while integrating them into their religious lives through prayer, study, and other forms of spiritual reflection.

By introducing the concepts of myth and second naiveté to Jewish theology, Gillman captured the spirit of the burgeoning postmodern moment. Gillman’s reluctance to use that rhetoric may have been because he did not seek to usher in a new era called “postmodernity.” Rather, he sought to move past the modernism of Kaplan and others who believed that the modernity could only bring inevitable moral and intellectual progress.

Here, too, his heart was with Heschel, who saw that modernity had unleashed humanity’s inhumanity more than bring meaningful moral progress. Gillman could be seen as postmodern in being a critic of modernism within modernity without seeking to move past it. In embracing this tension between modernity and its limits, and in striving to give the Jewish past a voice on new terms, he revolutionized theological education for his students and inspired a generation of teachers of Torah.