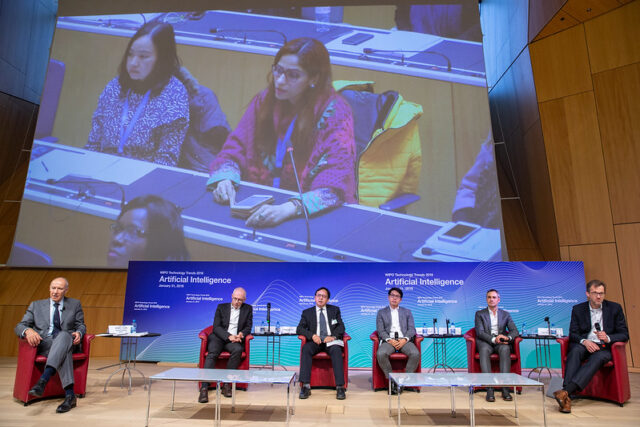 Many years ago, I got into a debate with a male scholar, well-known on the Jewish circuit, about why there were not more women faculty members on the roster of a particular institution. Without blinking an eyelash, he said, matter-of-factly, “There aren’t enough qualified women.” Wrong answer. I asked him for his criteria, went home, and typed up a list of 60 women with the required credentials and emailed it to him. I never heard back.

This story, to me, illustrates the issue that undergirds the discussion of manels: the generalized belief that there are not enough competent women to occupy the seats. The question of manels discussed here at Lehrhaus, I believe, contributes to a necessary and under-addressed issue while also potentially sidestepping two fundamental assumptions: the persistent, erroneous belief that there are not enough women to fill these roles and a broader misconception that panels, in general, are sound educational structures for the delivery of content and opinions. Before asking if more women should be on panels – the answer is an obvious yes – are panels, in and of themselves, valuable educational formats in which genuine learning takes place?

I’d like to tackle this second issue first. On the face of it, panels seem to be an excellent way to engage a variety of opinions and personalities around a topic of interest. Ideally, a panel brings together those with different experiences and expertise for the back-and-forth, the shakla ve-tarya, of debate. When an issue is contested and controversial, sparks fly, and the audience becomes increasingly engaged. Every time we see a panel advertised, we are hopeful.

Yet, anyone who has ever heard a panel – which is nearly everyone – knows that this reality is a rarity at meetings and conferences. More often than not, no matter the hot topic or the big name presenters, a panel is an hour of disappointment, unless, of course, it’s two hours. Close your eyes and you’re there. Four or five people with microphones sit behind a table with navy fabric bunting paying little attention to a lackluster moderator until it is their turn. This inattention diminishes the chances of any thrilling sparring. There is an underlying fear of offense so that the discussion is usually highly curated and manicured. There are often too many people to be thanked or be cautious about; consequently, niceties eclipse content. If there are too many panelists, no one really has a chance to educate. When the panels involve rabbis, particularly those of recognized stature and authority, the other panelists self-edit and self-censor so as to make the very idea of debate a non-starter.

In the unfortunately named article “How to Kick Butt on a Panel,” marketing specialist and author Guy Kawaski advises panelists to make sure they really know their subject and control their own introductions by telling the audience what they’d like them to know. He advises panelists to speak up and speak out without waiting to be called; entertain rather than only inform; tell the truth; answer the question that’s posed but not feel limited to that question; and be plain, simple, and short. Panelists are not to look bored or look at the moderator, and they should never say they agree with another panelist, because it’s a waste of time. In other words, all of the advice Kawaski gives points to the fact that panels are mediocre and unengaging media to communicate ideas. And if, in the unusual instance, sparks do fly, the format of a panel rarely offers time for any controversy to be properly addressed or processed.

From a pedagogic standpoint, a panel feels two-dimensional, maybe even one-dimensional. The audience has little role until the Q & A, when the questions often are not questions but declarations. The panelists themselves never have enough time to formulate a thought fully or properly develop an idea in the five allotted minutes. If you allot ten, it’s not much more time to teach anything, but too much time on any one panelist. The audience gets restless. If the panelists get too deep in the weeds of their expertise, the audience gets lost. If they don’t get in the weeds enough, they hover in a generalized space that fails to enrich. There is also a detectable tension, even a touch of envy, among panelists as to who is smarter, wittier, most lucid, or more informed. Often the person who can tell a good joke is better received than the panelist who is most knowledgeable. As audience members, we often have the distinct feeling that the panelists didn’t prepare at all because, after all, it was only a panel.

Should more women appear on such panels? No. Fewer men should appear on them. In fact, if I never heard another panel discussion for the rest of my life, my world would lack nothing.

As an educator, not only do I avoid them, but when asked, I advise organizations to find another format that is less transactional. They are not always grateful for this unsolicited advice, but I, for one, have rachmunes on the audience and believe that to bring gifted people together and not allow them to do what they really know how to do is a shame and a waste.

What’s the alternative? A conversation. The very word changes the visual, dynamic, and expectation of engagement. It changes the way people are seated and reduces the stress to be the smartest or the wittiest. The point is not for one person to best another but for the conversation itself to be rich and meaningful because humble people are interested in what other people have to say and let them say it. In a conversation, there are no timed slots. You take the time you need, conscious of creating a respectful space for others, and ask your fellow conversationalists to explain more if you do not understand.

And here’s where the female factor comes in. Conversations are best when they both reflect the community in the audience and inspire them. Communities are not made up of all males, but if you looked at most panels in the Orthodox community, you might think so. And when it’s only males speaking, the other half of the audience may not see themselves fully in those on the stage, or worse, may not believe that their experiences are worthy of someone else’s attention.

Why is it that when someone asks me to speak because they “need” a woman (for the optics, of course), they cannot detect the insult? Don’t invite women to speak so you can have the “female” perspective – whatever that is – on your panel, but because you benefit from the perspective of another human being. Conversations, to be multi-valenced and interesting, require that we stop talking to ourselves. We have mirrors for that. Can a panel ever really produce an I-Thou moment? Not really. But when a conversation is good, it produces lots of them. The “Thou” cannot be only male or mostly male if a conversation is an authentic reflection of our community. It’s time to say kaddish for panels or manels, or whatever you want to call them, in favor of exchanges that are more humanizing, which means that all humans – “male and female He created them” – share in the conversation.