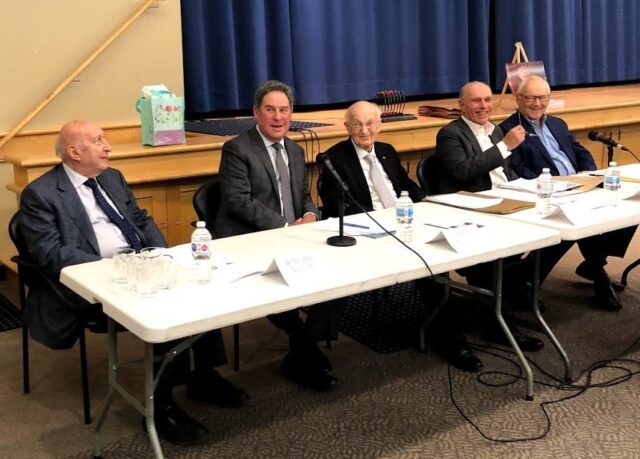 EDITORS’ NOTE: There has been considerable recent discussion online on the so-called manel phenomenon, particularly the difficulty many in the Modern Orthodox community experience in attracting women to participate in panels. But one aspect of this discussion is worth fleshing out more fully: why is it so difficult to attract females to participate, and how does that impact the kinds of solutions we ought to implement? Our two contributions today discuss – and debate – precisely this underlying issue.

Recently Yoel posted on this issue on social media, which led to a significant public debate. As someone who has long navigated the complexities of being a woman who teaches gemara and Halakhah as well as publishing academic research in rabbinics, this is something Shana is acutely conscious of. These led to extensive conversations with one another, and behind the scenes with numerous community leaders and editors. Writing about this question for the Lehrhaus offers us an opportunity for a measured and productive conversation that can hopefully lead to some practical improvements.

Recently, within the Orthodoxy community, the tendency toward having exclusively male panels has received some attention. Volumes of collected essays that include only token female contributions (if any), male-centered synagogue-speakers lists on Shavuot night, and synagogue-sponsored “manels” have gotten increased attention.

Lack of Women’s Participation is a Problem

When women do not appear on panels and when their writings are not included, we simply miss out on important things that members of our community have to say and teach. The public intellectual face of Modern Orthodoxy comes to look too much like the Haredi world, with whom we disagree profoundly on issues of gender and women’s place. More importantly, it widens the every growing chasm between women’s two lives: their experiences in the larger society as competent professionals who are respected as equals, and their experiences within their religious communities. To the extent that we believe this dissonance to be spiritually destructive on an individual level and corrosive to the formation of our communities, it behooves us to attempt to lessen it by bringing women as much as possible into these public-facing forums and insuring that they are part of the intellectual conversations that define Modern Orthodoxy.

Women (and men) are under no obligation to speak or write, and they need not justify themselves to any individual or communal agenda. Still, women in the Orthodox community struggle with some of the same issues that face women as a whole in contemporary society, which lessen the likelihood that they will be inclined to contribute in public venues, even when asked: unequal distribution of domestic labor and child rearing; a general sense that women’s participation is less valuable and less worth investing in than men’s; lack of mentorship and preparation for higher profile roles; and a general distrust of ambitious women. More, research on general academic conferences notes that women request to speak less and in practice speak less than men, and researchers attribute this at least in part to women being acculturated in such a way as to have less confidence in public speaking. This problem is certainly exacerbated by the highly gendered religious atmosphere throughout Orthodox education and life, during which women’s public voices are seen as the exception rather than the norm.

That being said, we wish to focus on an aspect of the issue that is more specific to our community: why do women who are qualified to do so and see value in doing so — for example, those who learn and teach professionally— (anecdotally) turn down offers to take part in public panels, give communal shiurim, or write for journals and online outlets? Why is it that women who have spent years learning in the beit midrash, teaching in schools and midrashot, or who regularly publish in academic journals, are reticent to contribute to the various forums that engage with the public intellectual life of Modern Orthodoxy?

In some cases women are not invited to contribute— at least not to the extent that men are. Those who organize panels or edit journals may feel they have done their duty after they meet with a negative response from one or two women. It is therefore our hope that by giving those who play these gatekeeping roles a better understanding of why they are getting turned down, and offering a few concrete suggestions, their sincere efforts might be met with more positive responses.

When a woman is asked to participate in a public forum she may ask herself a series of questions, and she may perform a particular cost/benefit analysis. Is this a forum in which my views will be taken seriously, or as seriously as those of the other participants? Will the audience or other participants react with skepticism toward me and subject my writing or remarks to a level of scrutiny that men, the other participants, will likely not face? Do I risk, if I say something remotely unpopular or controversial, a less charitable reception than male participants? Will I find my motives, religious beliefs, and commitments questioned? Am I the only woman being invited, and am I serving as a token, or being asked to represent women as a whole?

In addition, where the topic touches on matters of Halakhah, Talmud, or rabbinic figures, women face the possibility of being seen as having less knowledge and/or formal standing. A communal sense that “real” Torah is men’s Torah can easily produce among women an exaggerated sense that a man with a typical Orthodox education knows a great deal more than he actually does. Women, no matter how knowledgeable, talented, or articulate, can feel less confident about what they have to add, even if those same women feel profoundly confident in their professional lives. Given the sometimes nasty scrutiny which women of public stature often face, this concern is hardly surprising.

In short, many women are understandably hesitant to participate and risk being not taken seriously at best, and personally attacked at worst, and hence likely to consider that the costs may outweigh whatever benefits might accrue to themselves or the community. It is probably not coincidental that many of the women who are most visible in public facing roles come from rabbinic families and are thereby shielded from a good amount of skepticism and excessive scrutiny. It is also not a coincidence that many women who could potentially contribute have turned to academia, where there is much more likelihood that their ideas will be given a fair hearing and they won’t be personally impugned.

Understanding why women might be reluctant to or less interested in speaking or writing should not deter us from pursuing greater gender equality in Orthodox public discourse. In the spirit of brainstorming, we would like to offer suggestions to organizers and participants about how to better the situation. There are, of course, deep-seated, structural issues in male and female education and socialization, such as increasing public speaking opportunities, writing, and mentoring for female students at younger ages. But we will focus here on the more immediate concerns that can improve things in the here and now.

The most important thing we can do is to demand this from our own communities. Tell a local rabbi that you would like to see more female scholars in residence, suggest names of women to give shiurim, read works authored by women, and quote or cite them. Expect this kind of gender inclusivity from our community and its leadership and speak up when it is not forthcoming.

For other participants and writers:

In the academic world, “manels” are gradually (but still imperfectly) becoming a thing of the past. Researchers increasingly understand that a gender-balanced conversation is a better one. A university that organizes an all-male panel or male-centered conference knows to expect a well-deserved backlash. The Modern Orthodox community lags behind, unfortunately.

Modern Orthodoxy has not yet, and perhaps never can, resolve the tension between valuing women equally the way we do in contemporary western societies and reserving a special place for men as transmitters and arbiters of an authentic mesorah. The lack of women in various panels and volumes is ultimately a reflection of these unresolved tensions. It will take time and effort to address those deeper issues, but in the meantime, we can do more to bring our practices better in line with our values. We owe it to ourselves and our communities to create a more inclusive, and hence richer, public discourse.