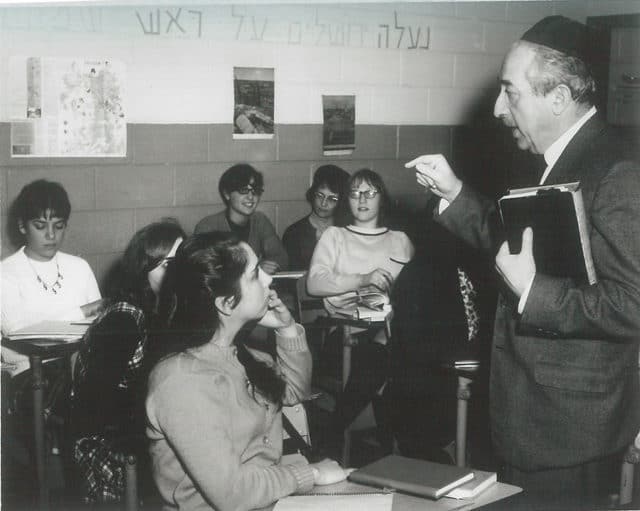 In this short vignette—a late summer afternoon, an elderly Jew and his children, perhaps his grandchildren—my father, z”l, Rabbi Prof. Eliezer Berkovits, captures something formative in the passage of the generations in the modern history of our people. In doing so, we are invited to enter a timeframe familiar to many of us and to contemplate its underlying meaning. Along with that, we are granted a unique insight into the soul of one of the leading Jewish philosophers of the twentieth century.

My father was criticized all too often for his outspoken views regarding the challenges facing Orthodoxy—and its failures—in a revolutionary period in Jewish history and in the development of modern civilization. He was among the first leading figures in American Modern Orthodoxy—perhaps the very first—to raise a number of central issues that required creative thinking and determined action on the part of rabbinic and educational leadership. He was especially concerned with challenges to the halakhah that reflected fundamental questions of human morality in contemporary society. He toiled again and again to offer solutions to those questions based on the depths of Torah consciousness and the clarity of halakhic thinking.

To enumerate just of few of the issues that, in my father, z”l’s view, constituted the challenge to the survival of a vibrant Modern Orthodoxy: the need to allow autopsies that could create the medical knowhow to save lives in the future, and in hospitals on the other side of the globe; the need for a halakhic policy in the area of conversion that would create consensus among all the denominations; the need to respond constructively to the nascent awakening of feminist consciousness among committed women; the need to create a halakhic solution that would solve the communal tragedy of “agunot;” and, above all, the need for formative thinking in the areas of halakhic concern in the daily running of the modern state of Israel so that taking responsibility for one of the miracles of modern Jewish life would not be left only to those not committed to the halakhah.

Many of those issues, for which my father was often criticized as someone who was undermining the bastions of halakhic Judaism, are now central planks of Modern Orthodoxy and Religious Zionism, important features on the agenda of large segments of rabbinic and educational leadership.

But how can that groundbreaking worldview be reconciled with what appears to be a nostalgic description of the “old Jew” with his head covered by a “traditional yarmulka,” “his face adorned with a long graying beard,” “engrossed in a ‘sefer’ from traditional Jewish literature?” Does that depiction sound like that of a revolutionary visionary, of a profound thinker and philosopher? Perhaps it conjures up someone more like a high school teacher or a rabbinical sermonizer trying to convince young Jews as to the critical importance of preserving the age old tradition?

To understand what seems like an untenable paradox in the perception of the modern Jewish reality, we need to turn to another fundamental aspect of my father’s thought.

My Father and the Moderns

The “open minded” Jews who today understand the need to confront the issues that my father raised in the 1950s and 1960s of the last century are guided by an inner motivation, a belief in the basic values of western humanism. In contrast, although my father, z”l, was widely read and deeply understanding of the major figures of western thought, he was sharply critical of what he saw as the defeat of the human spirit in the contemporary interpretation of that humanism.

I recall our Thanksgiving dinners, dressed as for a hag, reading Tehilim together, thanking Hashem for the humanizing gift of Democracy and the aspiration for tolerance and common understanding. However, in the darkest corners of modern European civilization, there was also Nazism. For my father, that monstrous human creation was not a local aberration of the spirit, but the inevitable result of hundreds of years of incessant hatred towards those who represented an unseen Presence in human history, a Presence that demanded human accountability.

But more than that, my father saw the weakness of the western democracies. He wept, as none could rise up and wipe out Nazism in its early stages. Mark Gottlieb has described poignantly what was at the source of that perception. Here is some of his language couched in terms of my own understanding of this critical area in contemporary human culture: The lack of will to confront evil—then as today—to respond to the absolute moral command to act in the face of indescribable evil, is an indication of the collapse of western civilization. The salient values of democracy and equality have become an ideology, a religion, of human relativism. That has led to widely accepted social norms of permissiveness, a systematic attack on the boundaries of personal identity and often a rampant nihilism. As my father might have put it, “the world has abandoned its moral moorings and by doing so has put humanity itself at risk.”

All too often, human sensitivity and responsiveness to the “other”—values at the heart of what once was the bonding of Judaism with western humanistic values—has become the very source of the abandonment of the “image of God.” The deep wellspring of meaning and purpose in human life has been replaced by a digital distraction culture centered on preserving “I-ness” with almost no limits and by human despair so endemic in the drug culture. My father, z”l, identified the seeds of that sense of meaninglessness and despair in the emptying of the search for personal meaning in life so much a part of modern western humanism.

My Father’s Spirit for Humanity

What is the solution to the crisis of meaning and value in human society? What universal vision might redeem the human spirit? My father, z”l, believed that such a redeeming vision of hope for the human spirit could only come from the ongoing human encounter in the fullness of life with the Eternal Word. Only the inspiration that comes from the prophetic tradition and the underlying meanings embedded in the Talmudic interpretation and development of that tradition could touch the human soul in a way that would reawaken the search for meaning and purpose as a defining factor in human civilization.

In what he referred to as a world of revolutionary transformations, as a post-Christian world, a world in which closed traditionalism cannot offer succor so needed for the restoration of the human spirit—it is amazingly Judaism itself—renewed once again—that can provide the spiritual nourishment needed by so many.

In that context, the halakhah was the powerful tool honed over generations to provide the “creative wisdom in applying the Torah to the daily realities of human existence, its realization in the innumerable concrete situations through which the Jewish people passes in the course of history” (Not in Heaven). The state of Israel is the unique expression of a “people made to fulfill a God-given task in history … [it brings to] the fruition of the idea as a ‘deed’ that encompasses the whole of human existence … [a] faith that seeks realization in economics, social morals, politics, and in every manifestation of human life” (Faith After the Holocaust). Above all, there is the Jewish language of the continuous renewal of the human spirit:

Judaism is in love with life, for it knows that life is God’s great question to mankind … Just as Torah shapes life, so does Torah shaped life, in its turn direct and thus unfold Torah … and so on to eternity; Torah leading life and Torah-led life unfolding Torah. This is the inner meaning of the partnership between Torah and prosaic, every-day existence; and out of the partnership emerges a Judaism capable of unlimited development (Toward Historic Judaism).

Let’s now turn back to the scene my father describes as he walked, perhaps alongside my mother, Sali, a”h, two worlds side by side, the world of the elderly Jew reading a sefer in his chair and nearby the world of a group of children absorbed in reading newspapers. What a blessing! Reading newspapers! Today, the group of children would be sitting each one with their cellphone, lost in a private world, without the gift of interaction that creates knowledge and without the experience of intimacy and love that brings with it the promise of personal growth and of compassion and hope for human society.

There is a clear sense of pain in the description of the scene—there is no communication between the generations. But more than that. For my father, there was deep sense of loss; the loss of a genuinely human and moral culture, a unique form of “Jewish genius, influenced and influencing, [that] created new values in religious thinking, philosophy, literature, etc.” The elderly Jew does not signify a closed age old tradition, but an age old tradition that held the promise of the continual rediscovery of Judaism.

And the children—what of the children? They represent the pain of a world gone adrift, in meaningless moral limbo, unable to find the anchor for a life of growth, of personal meaning and purpose.

The short vignette ends with a question: What will be? What will come of a society in which there is no sense of permanence—no holding together of past, present and future? But there is also a dream, and in the dream an unspoken prayer and these are the words of that prayer: May we be blessed anew to “ponder what others before us, saints, prophets and teachers thought and taught; and now and then put the good book down for a while and to think our own thoughts and dream our own dreams, stimulated by the book.”

Did the Prophet Amos Predict the Women’s Siyum Daf Yomi?

Climate Change and Prayers for Rain and Dew

Finding Meaning in Determinism: How Jewish Thinkers Reconcile the Contradiction between...