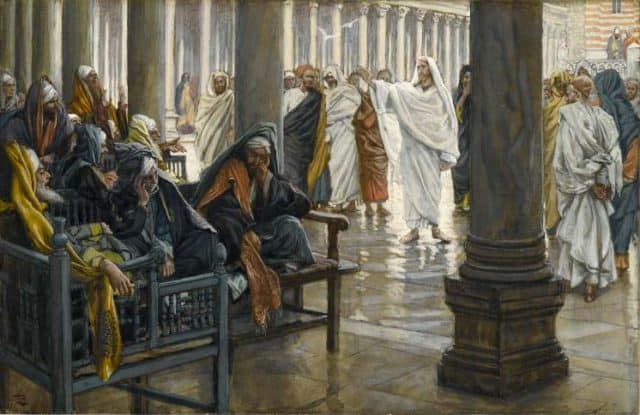 People participating in Daf Yomi—the daily study by Jews across the world of a new page from the Babylonian Talmud—recently encountered censorship of one of the Talmud’s pejorative references to Jesus. This act of whitewashing was deeply influenced by the history of Christian thought about both Judaism and the wider world.

But the censors were not Christians. They were Jews.

The story begins with the seventeenth page of Tractate Avodah Zarah, which contains one of several talmudic passages that refer to Jesus. Throughout the ages, these references were often erased or altered by Christian censors (although we still possess manuscripts that escaped this fate). This phenomenon was the subject of a recent entry in Talmud Yisraeli’s discussion of the passage in Avodah Zarah. Talmud Yisraeli is an Israel-based, weekly educational pamphlet for children containing brief synopses of material from the previous week’s Daf Yomi. It comes out in both a Hebrew version and an English version. As my Lehrhaus colleague, Elli Fischer, pointed out, whereas the Hebrew version (primarily addressed to the Israeli public) described the censorship of material in the Talmud “about Jesus,” the English translation dispensed with this reference to Jesus. Instead, this version mentioned censorship of material “about Christianity.” As Fischer noted, the irony is that the very same Jews excoriating Christians for censoring talmudic references to Jesus are themselves doing just that.

But the problem here is larger than just censorship. A worldview that demands the replacement of “Jesus” with “Christianity” itself reflects fundamental assumptions about both Judaism and broader society that are deeply shaped by the history of Christianity.

To begin, there’s the claim that is implicit in this act of censorship, namely, that the Talmud has something to say explicitly about Christianity.

The Talmud never speaks about Christianity as a whole, nor, with one possible exception, does it mention Christians as a group. The Talmud’s interest is in Jesus, the individual. It conceives his followers as students (idolatrous ones, to be sure, at least for the Babylonian Talmud), not worshippers. It refuses to treat them as a full-fledged community. The only possible exception comes in the form of the two references to Sunday observance in tractates Avodah Zarah (6a, 7b) and Ta’anit (27b). But even in those cases most manuscripts—at least in the Avodah Zarah versions—refer to “the Nazarene” (in the singular, i.e., Jesus), not “the Nazarenes” (in the plural, i.e., Christians).

Why is this important? For two reasons, one relating to the relationship between Judaism and Christianity, and one with broader implications for American society.

First, contrary to popular wisdom, Judaism and Christianity—certainly in the first century CE, but even later, as well—were not immediately recognizable, either to insiders or outside observers, as distinct religious communities. In fact, it took a great deal of time for the idea of “Judaism” and “Christianity” as mutually exclusive groups or religions to crystallize. People in antiquity continued not to think in these terms for centuries. The traditions in the Babylonian Talmud referring to Sunday as an idolatrous holiday do appear to assume that its observers are idol worshippers but we still must be careful not to interchangeably use “Jesus” and “Christianity,” as if one implies the other. After all, the assumption that the former inevitably and as a matter of course birthed the latter has been a core tenet of Christian supersessionism and antisemitism for almost two millennia.

But the significance of replacing “Jesus” with “Christianity” extend far beyond the Judaism, and its relationship with Christianity. It possesses implications, as well, for contemporary American political discourse.

For example, one distinguishing feature of rabbinic literature in late antiquity is that it never really developed a genre historians call “heresiology.” Heresiology is the “science,” as it were, of heresy, and it became a staple of the literature produced by early Christians beginning in the second century CE. Heresiologists emphasized the importance of creating (they would say “describing”) boundaries for their community, and thought the best way to do so was by relentlessly calling out all those whom they felt deviated from right belief or practice.

To this end, the heresiologists compiled exhaustive catalogues of “heretical” groups, and meticulously—if not accurately—detailed all the ways in which they were dangerously wrong. A quick glance at the heresiological work Against Heresies by Irenaeus, the second century bishop of Lyon, reveals colorful entries on the deviant followers of Valentinus, Ptolemy, Marcos, Carpocrates, Marcion, the Ebionites, and many more. The Panarion by the fourth century writer, Epiphanius of Salamis, contains entries on no less than eighty different types of heresy.

Rabbinic literature has none of this.

That is not to say that the Talmud’s rabbis were not interested in drawing the boundaries of their own community, or maintaining normative standards on everything from belief to practice. They certainly were. What they were not interested in was relating to wrongdoers systematically as a community—let alone as multiple communities—the details of which could then be described and catalogued in intimate detail.

The rabbis simply developed general, catch-all terms for all sorts of people, practices, or beliefs that they considered unacceptable, like minut (probably best translated as “dangerous distinctiveness”), or meshummad (“one who has become destroyed”). While these terms would eventually be used as code words for Christianity, or Jewish apostates to Christianity, that development took several centuries. But as far as rabbinic literature in late antiquity is concerned, one couldn’t use the terms “minim” or “meshummadim” to signify specific, historical communities that existed, in the same way that one very much could refer to the “Montanists,” “Valentinians,” or “Elchasaites” of Christian heresiological literature. Even terms in rabbinic literature that do refer to specific social groups—like “Sadducee” or “Boethusian”—are used interchangeably with each other In any case, they appear to have been inherited by rabbinic literature from earlier historical periods.

The bottom line is that while the rabbis’ insistence on clear boundaries produced outsiders, they did not dwell on different communities of outsiders. This includes Christianity, which is why the Talmud does not engage with it as a distinct social category. Rather than spending time defining other groups, and analyzing what was wrong with them, rabbinic tradition overwhelmingly emphasized its own values, and its own vision for society. Naturally, this vision itself entailed that people would be excluded, perhaps just as many as those whom the heresiologists wished to expel. But the insistence on presenting a case for something, rather than a case against something else, is instructive.

So much of American political discourse has devolved into heresiology. We have grown obsessed with cataloguing the evils of our opponents and detailing the deviations of supposed allies. I don’t mean to minimize the sins at stake, but in light of the continuing corrosion of American civic discourse, it is high time for a course correction. What we need now is a positive vision for the future. We require a set of values to cherish rather than deficiencies to abhor.

In other words, we don’t need, at least at this moment in history, the heresiological fixation upon others. We need the Talmud’s focus upon ourselves, upon a positive case for a moral and just society.