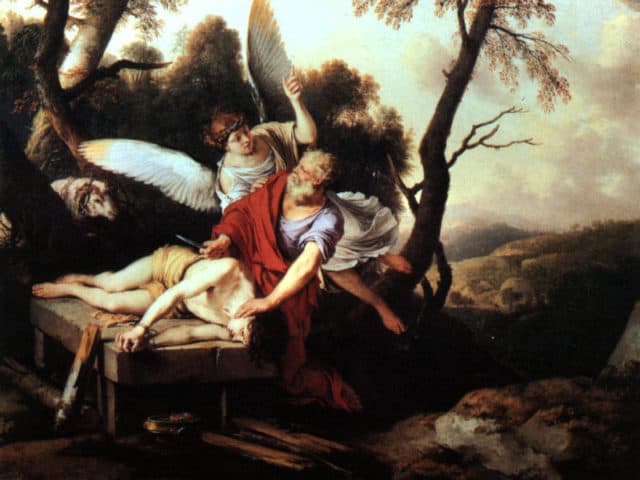 The story of the Akeidah, the binding of Isaac, is famous for the clash confronting Abraham between following the divine command and acting ethically. Many articles following or responding to the standard account of this story, including several featured at The Lehrhaus, wrestle with God’s demand that Abraham do something appearing to be clearly morally wrong. However, a closer look at literary features attending the verses of the Akeidah point to a reading of the story where this dilemma does not exist.

The first half of the story (Genesis 22:1-10) presents God’s command that Abraham sacrifice his son. Throughout this section of the story, God is referred to as Elokim. However, the second half of the story (Genesis 22:11-19), where the sacrifice is ultimately averted, all references to God as an actor are in the name of the Tetragrammaton, Y-H-V-H, and the command to Abraham to stop comes from a “messenger of Y-H-V-H.” Abraham thus hears God in two different modes, or in two different characters, in the story: first as Elokim, then as Y-H-V-H. Abraham’s understanding of and experience of God—the way Abraham apprehends Him—changes midway through the story.

The story emphasizes this shift clearly by a striking altered repetition within the story. When Isaac asks his father where the lamb is, Abraham answers “Elokim will see to (i.e., provide) the lamb Himself.” But after the crucial shift, Abraham invokes his answer to Isaac and names the place where the Akeidah had occurred after this theme of “seeing.” However, we find a striking change in the name of the location: Abraham calls the place where the binding occurs not “Elokim will see” but instead “Y-H-V-H will see.”

The text also contrasts the two names of God in another place in the story. God explains His command to cease by telling Abraham “now I know that you fear God (Elokim).” Many have questioned the text: How could God say now I know? Did God not know previously? But this question is resolved if one pays attention to the divine names at work. The text doesn’t say that God knows that Abraham fears God, but that the messenger of Y-H-V-Hnow knows that Abraham fears Elokim. The focus on a new aspect of Abraham’s God-conception is thus the new feature noted in the text.

Yet, even if one understands these names as relating to these different ideas and aspects of God that Abraham experiences, how does that help? The fact remains that God-as-Elokimsends Abraham to slaughter his son. How does the fact that God-as-Y-H-V-H tells Abraham to stop resolve the clash of ethics and divine obeisance? Doesn’t this merely insert another contradiction between the two divine commands?

In many sources, Hazal distinguish between these two names of God: Elokim portrays God as unyielding, expressing the characteristic of din, or inflexible Justice. The Tetragrammaton is understood as representing mercy, rahamim. The apparent contradiction between what God wants in the two halves of the Akeidah, then, may map onto the difference between these two understandings of God.

My claim is that the story’s switch from Elokim to Y-H-V-H shows us Abraham shifting from one conception of God and His relationship to the world to another. The story’s inclusion of both the command and the retraction represents its demand that Abraham understand and acknowledge the validity of both conceptions of God. Abraham’s understanding of Elokim is of God as an inflexible and unyielding Power; in fact, the word el itself actually means power. (See Genesis 6:2 and 31:29 and Rashi’s comments there.) This understanding of God in the story is contrasted with Abraham’s other conception of God, denominated as the Tetragrammaton, a Being with whom people can have a relationship of some kind.

To the God of power, the aggregation of all of the powers of the world, Abraham has no possible choice but to submit. The story brings to my mind Henry Adams’ experience of the dynamo at the Paris Exposition of 1900, which had displayed the industrial marvels of capitalism:

To Adams the dynamo became a symbol of infinity. As he grew accustomed to the great gallery of machines, he began to feel the forty-foot dynamos as a moral force, much as the early Christians felt the Cross. Before the end, one began to pray to it; inherited instinct taught the natural expression of man before silent and infinite force.

Before silent and infinite force there can be only submission. There is no bargaining (as Abraham had done when Y-H-V-H handed down a similar death sentence upon Sodom and Gomorrah three chapters earlier), no begging nor hope for compassion. The powers of nature, especially in their divine manifestation, are entirely beyond human intervention. There is no possibility that Elokim would change His mind or relate directly or individually to any individual human being. Natural force simply is. In the face of this infinite power, rightly understood, submission is the proper option because it is the only option. That is why Abraham’s submission to Elokim’s directive is depicted as a virtue.

To this conception of God positioned hierarchically above the world and human beings the story opposes a different conception of God, one that has a relationship with people. It is with this interactive conception of God-as-Y-H-V-H that Abraham argues when the plan to destroy Sodom and Gomorrah is revealed to him. In the Akeidah, Abraham comes to understand Y-H-V-H, in contrast to Elokim, as a God who sees, as it were, an individual human being. This is the significance of the shift from Abraham’s initial statement to Isaac that Elokim will see, followed later in the story by his correction that it is not Elokim who does so but Y-H-V-H. Abraham’s acknowledgement of God in this mode is portrayed by the Torah as a virtue, in fact as the crux of the story.

The story goes further, building upon Y-H-V-H as representing the God of revelation. The mountain where the Akeidah took place is named “Y-H-V-H sees,” justified by the saying “on the mountain Y-H-V-H is seen.” This reading of the story is perhaps hinted at by the two paragraphs that follow the Akeidah in the morning liturgy. The first is largely parallel to the Yom Kippur liturgy, and lays out in detail human meaninglessness in the face of God. This paragraph ends with the categorical nothingness of Kohelet: ha-kol havel—all is vanity, and there is no superiority of man over beast. In which case, one might add, there is no reason to sacrifice a ram rather than a child. But the paragraph that follows in our siddur strikes an optimistic note: even so, we are Your nation, in covenantal relation. Our forefathers delighted You and You chose us as Jeshurun.

If our reading of the Akeidah is correct, it is appropriate to read the story as placing humanity between these two divine conceptions and asking that both be recognized. God is a distant and infinite force of nature, avoiding direct human interaction and simply operating upon the world as pure power, beyond comprehension and certainly beyond control; as a God who chooses not to see or be seen. And yet at the same time it is also true that God has a relationship to the human world; it is possible for a human being to have a relationship with God, to apprehend and be apprehended by Him. Abraham’s success is that he holds both of these ideas in his mind at the same time.

Perhaps it is also worth noting the poverty of the reading of this story commended by the Bible critics. (Consider, for example, the chart at Richard Friedman’s Who Wrote The Bible, 246, which presents most of the story written by E, and 22:11-16a as written by R.) They see in this account no more than a fight between two different camps of writers, with some verses written by one group and the rest written by the other, each using its favored divine name.

Both the reading proposed here and those suggested by Hazal start with the demand that we make sense of the two different commands issued by God in tandem, as they appear in the text. The Bible critics, by contrast, see only a cut-and-paste job, from which it is impossible to learn anything true about God and His relationship to the world. As I have argued previously on The Lehrhaus, that’s no way to read any great book, much less the Torah.

Finally, we might venture a bit further in noting that the Torah, and indeed the entire Bible, frequently oscillates between these two names of God. If the above analysis is right, then the switching between these two names of God is rightly read to constitute a discussion about the relationship between nature and physical power, on the one hand, and with some higher ethical force, on the other, whether it is called Being, Justice, or another ineffable concept. One might then profitably read the Tanakh’s distinction between these two names, and the roles they play in its account of Jewish and global history, as a discussion about the relationship between power and the good—a topic that philosophy has struggled with since its inception.