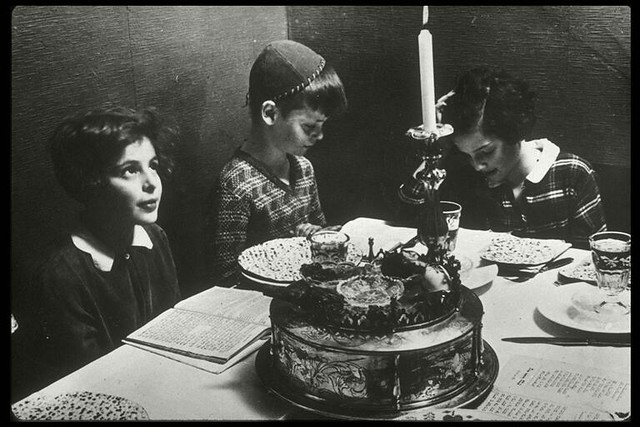 The COVID-19 virus has at once made the world larger and smaller, connected and disconnected. A plague of truly biblical proportions, we are united – arrestingly bound up – with all of humanity, while at the same time supremely isolated, as each of us hunkers down at home in an effort to thwart the pandemic’s rapid spread. Trapped inside, we must refrain from communal gatherings such as beit knesset that nurture our social and spiritual selves. Nor can we enjoy the physical presence or embrace of friends and extended family, or commune around the table to share in meals. In this situation we have turned to the screens and technologies that allow us to connect from afar, but we are keenly aware of the limits of those technologies.

The Passover Seder – one of the most widely-observed Jewish rituals – appears to be under threat this year. Given our home-bound realities, many of us feel great sadness and anxiety, as we fear the loss of the perceived essence of the Seder – the familiar gatherings and the ensuant sense of togetherness, the extended friendship units that make Passover such a powerful conduit for unparalleled conversations of meaning and spiritual sustenance. Must Seder suffer the same suspension that has been hoisted upon the entirety of our lives?

Some halakhic authorities have offered dispensations for the particularly vulnerable (such as elderly grandparents) to participate in Zoom Sedarim, a move that has augmented a sense of allure of this solution for many others, despite the controversy it engendered. We would like to offer a different take on how to observe the Seder during the COVID-19 pandemic. We believe that at least for some of us, the unprecedented demands of our current situation present a spiritual opportunity, allowing us to access one of the deepest elements of the Seder that early rabbinic sources sought to foster. Seder-ing alone or with the people with whom we are confined – and refraining from Zoom – may offer a rich and unexpectedly meaningful Passover.

The Beginning of Us

The Exodus from Egypt – or, to be more precise – the ritual observance marking the Exodus (in our days, the Seder; in Biblical days, the eating of the Paschal lamb) is the very first Jewish communal act. As such, it is constitutive of the Jewish collective. This explains why even secular Zionists enlisted the Seder as a method for fostering a Jewish collective sensibility. And it is for this reason that Rashi (to Genesis 1:1) asks why the Torah begins with the creation narrative, rather than with the opening verses of Exodus 12, which seems to offer a more logical starting point given the centrality of Israel’s communal obligations. After describing the creation of an Israelite calendar in verses 1 and 2, Chapter 12 proceeds to describe the process of selecting and eating the Pesah offering:

(3) Speak to the entire community of Israel, saying: On the tenth day after this new moon they are to take themselves, each person, a lamb according to their father’s house, a lamb per household. (4) But if there be too few in the house to finish a lamb, he is to take (it), him and his neighbor who is near his house, by the computation according to the number of people; each person according to what he can eat you are to compute for the lamb.

Verse 3 contains the two critical markers of the Jewish collective: an address to “the entire community of Israel,” and the observance of a shared historical consciousness played out in shared time: a communal calendar. But then the verses take an unexpected turn: Jewish communal sensibility will be formed not in the wide-open, but in the confined spaces of homes – by individual family units. The marking of the beginning of Jewish peoplehood takes place not in the public square, nor even in a place of communal gathering such as the beit knesset. Ironically, it transpires in the private domain.

Thus far, we have established only why the Seder takes place in the private domain, in relatively small units. But the Mekhilta, the earliest rabbinic midrash on the book of Exodus, goes even further:

Suppose there were ten families belonging to one father’s house. I might understand that in such a case only one lamb should be required for all of them. The Bible therefore states: “A lamb per household.” (Mekhilta de-Rabbi Yishmael, Bo, 3)

The Rabbis seem to know that we want to observe this moment that establishes the collective in the widest possible familiar circle, as a clan or extended family. But they go against that grain, emphasizing the biblical command for each household, the nuclear family, to constitute its own unit.

Yet the Rabbis do not stop there. They offer two alternatives to the nuclear family unit, all the while adamantly refusing to extend the circle to the larger family unit:

Rabbi Akiva says: From where do we know that if a person wants to have his Pesah offering on his own then he is permitted to do so? As it says, “He is to take (it).”

Rabbi Yishmael says: From where do we know that if a person wants to enroll others in his Pesah offering then he is permitted to do so? As it says, “He is to take (it), him, and his neighbor” (Mekhilta, ibid.)

Rabbi Yishmael reads the verse in a way that redraws the lines of the household, and the Passover observance: it is not about blood relations, but rather about intimacy and proximity. If a person wishes, one may invite someone else – anyone else – to join. But the truly radical move belongs (as usual) to Rabbi Akiva, who reads the verse to open up the possibility that the individual may have the Pesah offering – and, by extension, observe the Seder – by oneself. Of course, Rabbi Akiva is not saying that such a situation is preferred. Still, his teaching is not merely unexpected or unfamilial; it is subversive.

Why would Rabbi Akiva stake out such an extreme position? Rabbi Akiva understood the peshat (plain) meaning of these biblical verses: that the size of the group participating in each Paschal offering should be the “right size” in order that they should together completely consume a whole lamb. When he suggests that the individual may eat the Pesah offering alone, he’s not endeavoring to find a solution for someone with an enormous appetite. More important, Rabbi Akiva was not living during the modern age, when the individual’s autonomy is considered a supreme value. So he’s not advocating the atomization or privatizing of communal religious practice in an effort to meet the norms of his day. Moreover, his sights remain affixed upon the aim of establishing communal consciousness through this ritual. Rather, he’s saying something profound about the way that – or, better still, the locus where – Jewish collectivity is formed: in the consciousness of the individual.

No Pack Mentality, No Oppressive Freedom

In his masterpiece Moral Man, Immoral Society, Protestant theologian Reinhold Niebuhr grapples with a vexing question: if the individual shows such inspirational ability to sacrifice self-interest for the sake of acting out of moral agency, why does the collective have so difficult a time doing so? In two important senses, Rabbi Akiva’s position in the Mekhilta seems to preempt Niebuhr’s quandary, prescribing a method for fostering communal consciousness that places at its center the moral capability of the individual.

First, we can say that by insisting that communal belonging transpires within the individual, Rabbi Akiva offers a vision of communal cohesion that rejects the pack mentality. The moral failure of a community occurs at precisely those moments when the individual ceases to think autonomously, sacrificing the dictates of her conscience on the altar of the existent communal norm. For Rabbi Akiva, the individual’s sensibility becomes the birthplace and source of communal consciousness.

But Rabbi Akiva’s insistence that the individual can observe Seder alone offers an additional answer to Niebuhr’s concern. If the cornerstone of the building of Jewish historical memory is the Exodus from Egypt, then the central, hallowed space of that building is the unrelenting command, worked and reworked throughout the Torah, that because the Jew knows what it was to be a stranger in Egypt, she must act with moral sensitivity and compassion toward the stranger. A Jew’s newfound freedom must not and cannot become a source of oppression of others, or else he has betrayed Jewish collective consciousness. Thus at the heart of our communal identity is the command aimed at the individual moral conscience. This ethical excellence may well become the trademark of our people as a group, but the starting point of that path lies deep within the recesses of the individual. Rabbi Akiva’s insistence that the individual can eat the Pesah offering alone finds a foothold in the verse, but its true religious telos reaches the highest and widest aspirations of Jewish peoplehood.

How will this Seder be different from all other Sedarim? For some, it will be different because of the allure of linking themselves to others electronically. For many, it will simply be difficult, even painful. But for some, there is a silver lining, the opening of a new spiritual possibility. By conducting Seder at home, we can explore in new depth what we as individuals are capable of achieving as the constitutive locus of Jewish collective consciousness.

At the same time, we may be forced into the narrow straits of a powerful discomfort of having to speak and lead where we are normally silent or acquiescent. No one can do the work of leading the Seder for us – framing the questions, suggesting themes, offering inspiring interpretations. We will hear our own still small voices. We can give them much-needed airtime. If until now we have been the passive recipients of the Seder, this night will be different because there will be no one else to shield us from our own responsibilities, dreams, and inadequacies.

The Talmud (Pesahim 116a) even goes so far as to say that when a person eats alone during the Seder, she must ask herself the Four Questions. Our inner dialogue, the deep questions that we so often leave silenced or unarticulated, are waiting to emerge. From them – and only from them – can the larger Jewish narrative be woven. This year, let us not be enslaved to our preexistent sense of the conditions of a meaningful Seder.