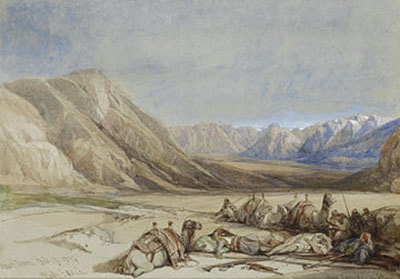 Earlier this year a critique was levelled against an effort to forge a more inclusive orthodoxy. It argued that the effects of the enterprise were cosmetic and superficial; all tone, no substance. Amassing a catalogue of ostensibly prejudiced ritual traditions, it surmises derisively, “Maybe a nicer tone is all you need to make those practices meaningful and pleasant.” Perhaps tone is not all you need, but a pleasant tone truly meant deserves far more than scorn. Our sages knew this, and their interpretive torsion of God’s first public words prove its power.

Biblical readers are familiar, from first light, with the voice of God, but not until the twentieth chapter of Exodus—over 2,500 years into Biblically conceived world history—does God verbally address a crowd. From floods to frogs He has exhibited displeasure through supernatural interventions, and communicated His intention through human messengers, but it is at Sinai, before a nation of slaves still aching from the pain of labor, that he first speaks publicly.

“I am the Lord your God” (Exodus 20:2). Plainly read, these words in their context should perturb us. The Israelites, at this stage, ate celestial bread, they walked by the light of angel-fire and inhabited an ethereal mist. They have, as a nation, felt God’s unmistakable mark, perhaps never more than when pacing through parted waters. The time for introductions had passed. When Sinai then thunders and their souls jointly shudder there could be no doubt as to whose words assaulted their senses. Why open the revelation of heavenly ethics with a farcically obvious remark? Why make Heaven’s first public impression one of naïve detachment?

Thus becomes an ordinary accumulation of letters—“I am the Lord your God,” “Anokhi Hashem Elokekha”—a hotbed of exegetical activity.

So coerced to feel that this formulation says more than it seems, a number of commentaries apply a cipher. Rabbeinu Bachya splits the first word into alphabetic, arithmetic, and phonetic fragments that in turn disclose a code for theistic totality. The Ba’al Ha-turim applies a comparative calculus to transform the apparent excess into another unspoken creed. And the rabbis of old resolve our concern by presuming the semantic density of a veiled abbreviation:

R. Yochanan himself said, “Anokhi” is an acronym: “I myself have written the script.” The rabbis said: “Pleasant speech, a writing, a gift.” Some have said to read “Anokhi” in reverse: “Scripture was given, faithful are its words” (Shabbat 105a).

Without examining each of these expansions, it is clear that so incongruous are the first words of revelation that they incite an array of esoteric interpretations. But while these meanings can be submerged for attentive readers to disinter, not one of these renderings can be the meaning gleaned by our ancestors aurally stunned that morning at Sinai.

If one accepts the principle of Biblical brevity, as many commentaries do, and seeks to preserve the integrity of the scene’s presumptive reality, how can we account for God’s first communal words?

We now turn to tone.

The unpunctuated Biblical text tends, at first, toward monotony. This is what triggered our initial confusion. Our verse is most naturally read as a flat introduction: “I am the Lord your God.” But, employing comparative semantics, the Malbim on our verse alters the tone:

The Malbim identifies in the Hebrew language a pronominal choice with vast implications. God’s selection in this verse then demonstrates precisely that he is not introducing Himself. With these words He instead offers an enunciated instantiation of power. God knows that Israel know who He is; He is not speaking to a question of identity, but one of authority. A truer translation might read: “I, and only I, am the Lord your God.” Israel’s first verbal contact with Divinity is a sober one. Like the legendary suspension of a mountain over Israel’s heads, God introduces the Decalogue with a crushing utterance that looms like an ultimatum. As a first impression, God is severe, stern, and domineering.

Hermeneutically speaking, the Malbim ratchets the tone to defend the text. An unnamed sage of the rabbinic period takes another path:

In this ancient homiletic compendium—assumed by scholars to have been compiled around the fifth century CE—an anonymous voice implicitly recognizes our preliminary bewilderment. But this sage does not ratchet the tone, he softens it.

Apparently the time for introductions had not passed. When Sinai was struck, the identity of the responsible being was anything but self-evident. The experience at the mountain bore no resemblance to the previous seven weeks of wandering, and indicated no continuity with the events of the exodus. The notion that Israel would recognize every supernatural force as, by definition, deriving from the same divinity, is, for our sage, simply naïve.

Escorted to freedom by the hand of a martial mastermind and liberated by the repeated thrashing of an awesome power, Israel is stunned by Sinai’s cerebral culture. The Heaven conceived by fleeing slaves is administered by a soldierly authority—so to intuit the presence of a gentle teacher more than muddled their imaginations. As shoulder marks fade into elbow patches the people wonder how on Earth Heaven changed?

Our sage here suggests that these words—“I am the Lord your God”—respond to Israel, in the midst of confusion, on the brink of theological surrender, and offer an indispensable consolation. For him a truer translation would run: “It is still I, the Lord your God.” Anything but crushing, God’s first public words concede to a human need and seek to steady a deep anxiety. The world will change; your lives will change; your faith will change; and your hearts will change; but I will be your anchor. The words convey: a caring stillness whispers at the heart of a cool and fluid history.

All our commentaries share a creed, a common belief in a single Being that governs existence. But tone, and tone alone, alters revelation. Jean Paul-Sartre cites a contemporary as saying that words are “loaded pistols” and notes that when we speak, we fire. Our sages suggest that the affinity between words—devarim, and bees—devorim, goes beyond the phonetic. It is a mistake of enormous proportions to imagine that tone is nothing but ornamental; it is not just the words that we say that mean.

Rabbi Joshua the Priest the son of Nehemiah said, “At the moment when God revealed Himself to Moses, Moses was a novice at prophecy. God said to Himself, ‘If I reveal myself to him with a great voice I will terrify him, but to use a muted voice is offensive to prophecy.’ What did He do? He revealed Himself in the voice of his father” (Shemot Rabbah 3:1).

Beyond what this midrash reveals of this sage’s perspective on Moses’ paternal influence—or the relationship between sons and fathers writ large—accent, tone, tenor, timbre, and inflection are of the essence. While Heaven’s projected deliberation may appear as a mere reflection on strategy, that itself is not a cosmetic concern. This is not a question of ornamental aesthetics but a deep concern for another’s welfare as it competes with a spiritual value. It is not just the words that we say that mean.

Will a compassionate tone assuage all the questions of prejudice that press against orthodoxy—both its practitioners and its traditions? Probably not. Should we then be indifferent to our speech? Never. This would not be the first time in our history that traditional convictions seem to stand in the face of progress, and if all we can summon in the face of this tension is bluster we do a disservice to our future and our past.

I will not speak to whether I personally believe that ritual policies should be changed or whether allegorical interventions should be made, but only that wherever one stands on this spectrum of responses the tone directed to those asking the questions matters.

Our tone should voice sympathy and empathy and love, like a parent, even if we champion convictions that we hold to be sacred. Any repudiation of broad changes should not be rooted in present authority but precisely the lack of it—it should be rooted in the humility of those bearing the weight of something far greater than us; something that requires our interpretive nurturing and resists easy revisions.

If we are to inspire confidence and fidelity in an age of reigning liberty, we must attend to that whispering stillness at the heart of fluid history; we must exude the allegiance and compassion of a faith that recognizes and responds to shifting anxieties. It is not just the words that we say that mean. Beyond philosophical and theological inflections, vocalized tenor carries its own semantics—it can be worth a thousand words and is not cosmetic but constituent of what is means to be conscientious.

As we ask those to the right not to mistake compassion for fragility, we also ask that flippant disinterest not meet a tone truly meant.