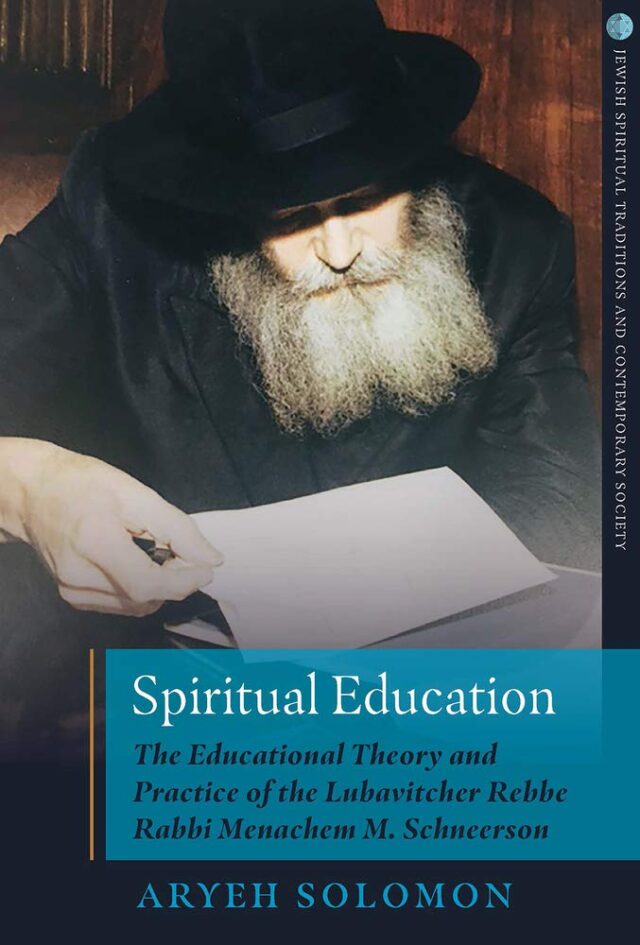 The scholarly work on the life and teachings of Rabbi Menachem Mendel Schneerson, the Lubavitcher Rebbe, has been growing exponentially in the past twenty years. Ever since Yitzchak Kraus’s dissertation on some aspects of his theology,[1] there has been a steady stream of work in Hebrew and English focusing on the extensive texts produced by the Lubavitcher Rebbe and on historical and anthropological elements of the Chabad-Lubavitch community.[2]

This volume focuses on a specific topic: the educational philosophy of R. Schneerson. The author presents the idea that the educational references scattered throughout the dozens of volumes of R. Schneerson’s work all amount to an extensive and coherent philosophy of education. The prolific texts created by R. Schneerson are almost exclusively transcriptions of hasidic discourses he gave between the years of 1950-1992. These hasidic gatherings (referred to as Farbrengen in Yiddish) included many topics focused on the Jewish calendar and current events. Because of these characteristics, scholars must review the extensive library of transcripts in their attempt to find systematic positions. The author has convincingly shown that R. Schneerson indeed had a philosophy of education that went beyond mere generalizations about the importance of education.

The book puts forth R. Schneerson’s educational philosophy in a way that engages with the significance, nature, aims, and authority of education. It also includes discussion on the position of the teacher by discussing pedagogy, adult education, curriculum development, and educational policy.

According to the author, R. Schneerson emphasized that education is not limited to the young. Adults should measure their spiritual growth using educational benchmarks. The core educational goal is to foster the natural connection to God that each person has from birth. An educator, explains R. Schneerson in multiple places, should deepen the connection to God by using intellectual tools, thus allowing the student to internalize not only this existence of the connection but also its importance and its effect on the emotional well-being of every individual.

But focusing on the connection with God has pitfalls of its own: the concept of spirituality can be rather amorphous and ethereal, leading to criticisms of a “new-age” education discourse. R. Schneerson preempted this obvious criticism by emphasizing the need to infuse the curriculum with practical issues, and for him this meant focusing on the practical application of mitzvot. As Solomon writes, “R. Schneerson also maintained that it is action, in contrast to philosophical discussion and theoretical deliberations, that impacts most on the learner” (176).

Since R. Schneerson’s educational theory emphasizes instilling in the learner the natural connection between the learner and God, it situates the teacher in a completely different position. Thus, chapters four and five of the book center around a discussion of educational authority in which the educator is not seen as someone tasked with assuring a student develops skills―at least not as a primary goal―but as tasked with instilling positive characteristics in the learner. In this way, education is transformed from a vocation into a religious duty. In other words, teaching stops being a job; instead, it becomes a religious obligation of the teacher.

At first glance, this could be dismissed as mere lip service to educators. Doesn’t everybody agree that educators are important and deserve more acknowledgment? But to R. Schneerson, these statements run much deeper. When he calls education a religious mission, he positions it next to other religious missions that require a sense of dedication and sacrifice. Think of the concept of Shlihut, where couples are dispatched to serve faraway communities; the vast majority of these families who leave Lubavitch enclaves and venture out to build outreach centers do so knowing that they pay a significant price as far as their relationships and comforts. To open an outreach center in a far-flung Ukrainian city with no other religious families in the vicinity and no schools―far away from family and community, and with limited access to kosher food―requires a sense of dedication and sacrifice. This sacrifice is justified and made more palatable when couched as a religious duty and a way to connect to both God and the Rebbe.

When teaching is heralded as a sacred calling, will teachers be more willing to sacrifice in the context of their vocation? Will they be willing to put up with lower salaries and limited work conditions? This last point deserves more thought and consideration and leaves room for future work.

Of course, the discourse of sacrifice is no stranger to religious education. The existence of a need to make sacrifices for Torah learning is an integral part of rabbinical texts, as exemplified by the discussion in Pirkei Avot (6:4):

This kind of rhetoric is common in Haredi discourse on religious life,[3] but it does not necessarily promote independence. On the other hand, in the educational theory of R. Schneerson, independent learners are celebrated; additionally, the ethos promoted is that of the ability of the individual to achieve great spiritual heights. The sense of authority and duty of obedience is only targeted toward the tzaddik (righteous one) and previous generations of religious leaders. This leaves wide room for one to develop a sense of independence, leadership, and even entrepreneurship. His focus on independence is not surprising when taking into account the fact that R. Schneerson wanted his hasidic followers to revolutionize the Jewish community and establish institutions to further religious observance among Jews. Such a task demands a sense of independence and entrepreneurship.

Since the book focuses on describing an educational philosophy, though not necessarily the novelty of the approach, the reader needs to be careful not to miss points where R. Schneerson’s ideas are original and represent a new trajectory in the context of Orthodox views of education. Naturally, rabbinic literature has many references to education and pedagogy. These references obviously appear in R. Schneerson’s transcripts, but there are points where R. Schneerson goes beyond the traditional texts and offers a new point of view. His position on women’s education, for example, was revolutionary and unique within Orthodoxy. Already in the late 1940s, R. Schneerson supported a much broader curriculum for women’s education that included vibrant study of the Oral Torah incorporating even Talmud, which went well beyond the accepted norms in Orthodox communities at the time.[4] But there are many other revolutionary points in his educational philosophy.

Another such example in Solomon’s book has to do with the nature of education. As noted, the first chapter of the book shows that for R. Schneerson, educational discourse is not limited by age. R. Schneerson was not only interested in both child and adult education, but more than that, for R. Schneerson, people of all ages should see their lives as an educational process and evaluate it as such. Growth is primarily (and perhaps exclusively) an issue that should be measured in the context of education. Not surprisingly, the educational philosophy of R. Schneerson does not put at the center functional knowledge and functional education―such as developing the skill set and ability to perform certain tasks―but rather the student’s understanding that his or her life is a spiritual journey seeking closeness to God. As such, education is not limited to a certain age group, and one uses education to measure their success in life―understanding of course that real success is spiritual, not material.

Another point where the unique perspective of R. Schneerson goes beyond the scope of traditional discourse is his discussion concerning the halakhic category into which the mitzvah of education falls. As generally understood, education (hinukh) is a rabbinic commandment to instruct minors in how to perform mitzvot so that they will be proficient in their performance once they become obligated as adults (see Hagigah 4a; Sukkah 42a). R. Schneerson wondered about an obvious question: why is such a central part of Jewish life only a rabbinic enactment rather than a Torah-level obligation? R. Schneerson novelly suggests that there is a category which goes beyond mitzvot; certain preliminary prerequisites are so fundamental that the Torah does not mention them. For example, the concept of a mitzvah makes little sense without a person accepting that God has the authority to command. The same, R. Schneerson suggests, is true for education. The obligation to teach children how to connect to God and perform God’s commandments is so central to Judaism that it is a precursor to any mitzvah. But these kinds of original points of view advanced by R. Schneerson are scattered in the different chapters of Solomon’s book and can be missed in the abundance of material this volume offers.

Solomon’s book serves as an initial reference to the topic of education in Chabad, but it is by no means an exhaustive and final position on the matter. There are many other points, mainly in the realm of policy, that need to be analyzed using the foundation laid in this book. One such example has to do with R. Schneerson’s view of the utility of the general studies curriculum. This volume touches on the issue, aptly describing the fact that R. Schneerson emphasized the importance of education Al Taharat ha-Kodesh, best translated as education that is exclusively focused on religious studies. However, as Solomon notes, there were many occasions where R. Schneerson supported inclusion of general studies. Solomon explains this support as applying to communities where the lack of general education would lead parents to choose other educational institutions, but there is more room for research on R. Schneerson’s view on the matter; some of R. Schneerson’s transcripts point to a more complex view of general studies education that needs to be analyzed further. For example, in a hasidic discourse (Ma’amar) delivered on January 22, 1978, R. Schneerson described how in the messianic era, secular knowledge will unite with and become elevated by Torah knowledge, bringing an elevation of reality.

This text references the rabbinic exegesis on the benefits of Torah versus “external wisdoms” (Hakhmot Hitzoniyot) and explains that these rabbinic texts do not mean to say that “external wisdoms” are worthless. They have value as long as they are used for holiness. The messianic era will see the elevation of this knowledge and how it can be commandeered for the sake of holiness. These themes were repeated by R. Schneerson many times through the years to explain the technological breakthroughs of the twentieth century, which he saw as a process that allowed for the dissemination of Godliness in more expansive ways. This is just one example of a topic in R. Schneerson’s thought deserving of more attention using historical research methods.

Another aspect that should be further investigated by educational field work concerns how the ideas presented in R. Schneerson’s texts have actually been implemented in Chabad schools all over the world. There is ample room for field work that will explore daily life in Chabad-Lubavitch schools and how they relate to the educational theory of R. Schneerson.

Spiritual Education is another addition to the growing literature on Chabad in general and R. Schneerson specifically, and it will surely be of use in further research on these topics.