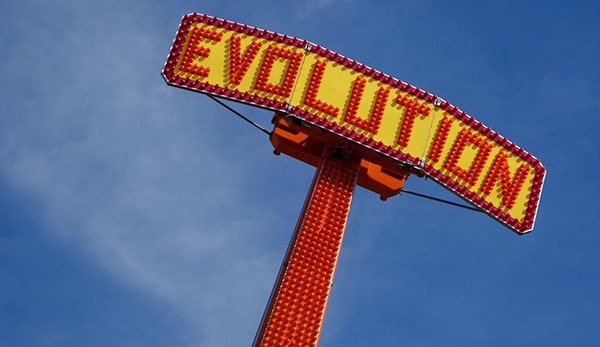 At the turn of the twentieth century, many immigrant and native-born Jews in the United States unyoked themselves from religious observance. However, the same period also witnessed a parallel phenomenon—the forging of a distinctly American form of Orthodox Judaism. At a particular moment in the 1920s, according to historian Jenna Weissman Joselit, this new breed of Jewish Americans had set before themselves a two-fold goal: to “rebuke and repudiate the reformers” and “to deal effectively and happily with the great task” of Americanization. The Orthodox rabbis who spearheaded this effort were easily riled by descriptions of Orthodoxy as “Old World,” backward, or out of date. They sought to fashion an American Orthodoxy that was as aesthetic, cultured, and engaging to those with contemporary sensibilities as it was rooted in tradition.

Quite naturally, then, a number of Orthodox leaders addressed the issue of Darwinism, made timely by the Scopes Monkey Trial in 1925. By the dawn of the twentieth century, major Reform exponents like Rabbis Emil G. Hirsch and Joseph Krauskopf had formulated well-known articulations of Judaism’s compatibility with Darwinian thought, a consensus position in Reform Judaism that won out after initial debate in the 1870s and 1880s. Orthodoxy remained equivocal about Darwinism, although significant rabbinic figures, Rabbi Samson Raphael Hirsch and Rabbi Abraham Isaac Kook, for instance, wrote that it was compatible with Jewish belief, even if they did not embrace it outright. However, despite the contention of American Orthodox rabbis that Judaism ought to respond to the issues of the day, there was no consensus about how to respond: was Darwinism part of the “Reform” program, in which case it should be combated? Or was it simply representative of “Americanization” and modernity, in which case it should be embraced?

The tension among the American Orthodox is exhibited in the pages of the community’s journal, The Jewish Forum. In 1926, two young and determined Manhattan-based rabbis published positions on the Theory of Evolution in this well-read monthly. Rabbi Leo Jung of the Jewish Center was a lifelong polemicist, capable scholar, and organization man. Rabbi David de Sola Pool, spiritual leader of Congregation Shearith Israel (also known as the Spanish and Portuguese Synagogue) was similarly a leader within a number of important organizations and a skilled orator with a love of history. Each obtained ordination from the Hildesheimer Rabbinical Seminary in Berlin. Both carried strong attachments to British forms of intellectualism to boot. And, their Upper West Side congregations were well within walking distance of one another. Despite these similarities, their respective positions on Darwinism were far apart. Rabbi Jung questioned the very basis of the Theory of Evolution while Rabbi Pool readily espoused it.

In July 1925, John Scopes, in a rather theatrical and public legal case, was found guilty of violating Tennessee’s Butler Act that forbade the teaching of evolution, as it “denie[d] the story of the Divine Creation of man as taught in the Bible.” Rabbi Jung made his position on the Scopes Trial clear in the March 1926 issue of The Jewish Forum. For instance, Rabbi Jung provocatively wrote:

For the benefit of those whom the tragic-comedy of Tennessee may have disturbed, let me state here deliberately and publicly that there has hitherto been no single piece of incontrovertible evidence even to the effect that man lived more than 5686 years ago.

In contrast, Rabbi Pool drew a different lesson from the controversy. Writing in the April issue of the same periodical, he contended that: “the theory of evolution [has] taught us to see the unity of God in the infinite variety of life,” and even that “the rabbis of ancient days caught a glimpse of the origin of species by means of natural selection as part of God’s plan for creation.” The differences between two rabbis who were otherwise so similar demands an explanation. There are several possible answers, but a consideration of these rabbinic leaders in their particular congregational settings can shed a good deal of light.

Rabbi Pool led the oldest Jewish congregation in the United States. Shearith Israel’s members took great pride in its long American history, probably dating back to the 1720s. In 1907, Rabbi Pool was called to help lead the synagogue by his cousin, Rabbi Henry Pereira Mendes. Rabbi Mendes belonged to a group of young traditionalists who were well-educated scientifically as well as religiously, and who came out in strong support of Darwinism in the 1880s, for instance, in the editorial pages of The American Hebrew. They actually used Darwinism in their polemics against the Reform movement, arguing that Reform Judaism, in its eagerness to reinvent the religion, violated Darwin’s and philosopher Herbert Spencer’s principle of gradualism by suggesting that religion should progress rapidly, in great leaps, rather than incrementally. Rabbi Mendes and his colleagues suggested that the American traditionalist camp better reflected Darwinian understandings of gradual evolution applied to a tradition’s adaptation to contemporary environments. Rabbi Pool, as well as many other young Orthodox rabbis, followed suit, seeing the embrace of Darwinism as in no way out of step with their religious sensibilities.

But while Rabbi Pool was leading a congregation that boasted a long history of stable Orthodox perspectives, Rabbi Jung found himself in a radically different situation. Rabbi Jung’s Jewish Center was established just seven years before the Scopes Trial, in 1918. Rabbi Jung became the synagogue’s second rabbi only four years later in 1922. The congregation and its founding rabbi, Mordecai Kaplan, had parted ways due to Rabbi Kaplan’s expression of positions contrary to Orthodox theology, such as his hesitations on the principle of Divine Revelation. Actually, Rabbi Kaplan had in fact felt alienated from the theological positions of Orthodoxy from the earliest years of his career. Rabbi Kaplan’s biographer, Mel Scult, has argued that Rabbi Kaplan emphasized “the import of biological and social evolution” in his view of religion, and that it was at Columbia in the first years of the twentieth century that he integrated the work of his advisor, Franklin Giddings, as well as Herbert Spencer’s teachings, into his own thought. While the full-blown transformation to Reconstructionism would take decades, Rabbi Kaplan began expressing his discomfort and disagreement with Orthodoxy in the years preceding the Scopes Trial.

As Rabbi Kaplan was still affiliated with Orthodox Judaism at the time, his radical theological notions stung other Orthodox rabbis. Rabbi Bernard Drachman, a former professor of Rabbi Kaplan’s at The Jewish Theological Seminary and the rabbi at Manhattan’s (Orthodox) Park East Synagogue, wrote a critique of the latter’s views in 1921, stating: “the cause of causes in producing a breakdown of religious sentiment and practice” is “the growth of a materialist and naturalistic concept of the universe.” He bemoaned not only Rabbi Kaplan’s famous denial of “Divine Revelation,” but also Rabbi Kaplan’s assault on God as “Creator.”

Rabbi Jung realized that his young Manhattan congregation lacked the communal and theological stability that Rabbi Pool enjoyed sixteen blocks away. Jung was at the eye of a storm, fighting for every congregant, and considered himself as a defender of an Orthodoxy under fierce attack in the 1920s. While the defense against what he termed “Kaplanism” did not detract from Rabbi Jung’s mission to display Orthodoxy’s sophistication and elegance, it likely made him hesitant to embrace concepts that seemed radical in their adjustments to Jewish thought, especially one like Darwinism, which Rabbi Kaplan himself had placed at the center of his “reconstruction” of Judaism.

The differences between Rabbis Jung and Pool with regard to Darwinism map onto the differences between their respective congregations. Rabbi Pool, in his rooted and stable community, was perpetuating a view that was put forward by his predecessor and mentor forty years earlier regarding the compatibility of Darwinism and Judaism. Rabbi Jung, in the midst of a crisis brought on by his predecessor’s revolt against traditional Jewish theology, which itself related to evolutionary concepts in the sociology of religion, expressed a rejectionist position towards evolution.

Therefore, somewhat ironically, Rabbi Pool’s support of Darwinism did not emerge despite tradition, but because of the tradition of predecessors like Rabbi Mendes and teachers like his father-in-law, Rabbi Hayyim Hirschenson, as embodied and stabilized by the 250-year old congregation he led. Rabbi Jung’s rejection of Darwinism, on the other hand, is not merely the preservation of old beliefs, but a conscious reaction against what he viewed as a pressing danger to Orthodoxy in America. In each case, questions of doctrine are addressed not in a theoretical vacuum, but within the context of living, breathing communities whose histories shape their receptivity to new ideas.