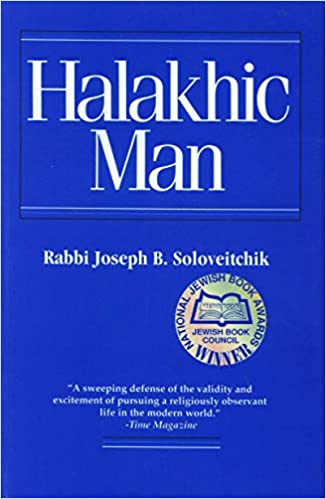 I first tried to read Ish ha-Halakhah as a high school student. I didn’t get far—the first or second quote in Greek characters defeated me—but I got far enough that I’ve never been able to escape the gravitational pull of the Rav’s thought. The vision that was planted in my brain still remains. I still think of serenity as a goal of Christian Science rather than Judaism, and tend to relate to Talmud Torah as the ultimate and potentially all-encompassing religious experience.

Its broad impact notwithstanding, there is no denying that the Rav’s works often frame the experience of Talmud Torah in categories that are marginal to both the public and the academy today. I continue to be struck by the irony that when Halakhic Mind critiques the Rambam sharply for binding Judaism to obsolete Greek categories, its clinching argument is that Rambam thereby fails to conform to Hegel (pp. 100-101). So what?

For many of my students, therefore, the Rav is, le-havdil, like Simon and Garfunkel. The greatest hits are acknowledged classics, and worth listening to on occasion, especially in an intergenerational crowd. But it is not their music. It does not speak to the religious issues that are burning in their life. No one will be writing passages from Halakhic Man on bus shelters to compete with “na-na-Nachman.”

There is nothing inherently wrong with this, and over time (a censored version of) the Rav may become more persuasive to Haredim than to the Modern Orthodox world, in the manner of the Hovot ha-Levavot. But I would rather defer that epoch to the extent I can. Here is one attempt at regenerating immediacy.

I take it as given that most of American Modern Orthodoxy experiences the Rav in English. I further suspect that the initial power and attraction of Ish ha-Halakhah even in its glory days was affective more than cognitive, as it was for me in high school, and that this affective power is hard to access today through the heavy philosophic jargon.

Halakhic Man is Professor Lawrence Kaplan’s classic translation of the Hebrew איש ההלכה; as with other classics, even the best translations grow dated. I want to offer here a new translation of one brief but central section, in the hope that it will serve the same social role as Disturbed’s cover of “The Sound of Silence.”

My fundamental intent, to be fully honest, is to re-appropriate this section as poetry rather than philosophy. To that end my basic unit is the line rather than the paragraph. I also privilege the literal and the literary over the expository. For example, I translate על ידי הדין וההלכה as “via the law and the Law” where Professor Kaplan has “by means of the law and the Halakhah,” and האימה פורחת לה כחלום יעוף as “the terror evaporates like an evanescent dream” instead of “the fright accompanying death dissipates.”

Retranslation inevitably opens up new areas of philosophic inquiry as well. My sense is that Professor Kaplan translated for coherence within known frameworks, whereas my translation lets the intellectual chips fall where they may. For example, he translates ומהפך את התופעה, שהוא מפחד, לאובייקט של הכרת האדם as “and he transforms the phenomenon, which so terrifies him, into an object of man’s observation and cognition,” whereas I translate the same line as “by transforming the phenomenon—that he is afraid—into an object of human re-cognition.” Is it death, or rather the fear of death, that is thus transformed? Similarly, in the last line translated below I have “the objective act” in place of “the act of objectification.” Which of these truly conquers the fear of death?

Submitted in the hope that I have not erred, and that my work only adds to the Rav’s enormous legacy.

The Man of Halakhah—
He is a man of rule and of principle, a man of law and of judgment.
Therefore he always has in his being—even while experiencing depression—
an Archimedean point, fixed and firm,
existing outside the turmoil in his soul, beyond the entanglement of affective life,
from which tranquility and calm flow.
Even fear of death—
which is rooted (as was explained earlier) in the Man of Halakhah’s worldview—
he defeats via the law and the Law
by transforming the phenomenon—that he is afraid—into an object of human re-cognition.
When the shadow-of-death which imposes terrors on him
wears the objective form
of a carried subordinated to a carrier, of an object that must bow to a subject,
the terror evaporates like an evanescent dream.
My father-and-teacher once said to me in conversation:
When R. Hayyim was powerfully subject to the fear of death,
he would utterly commit all his brain and spirit to the halakhot of enclosures and death-tum’ah.
These halakhot—
which come round and round to weighty matters and complex questions regarding grave-tum’ah, enclosure-tum’ah, contained tum’ah, barricades to tum’ah, utensil lids in a death-enclosure, etc.—
would quiet the turmoil of his soul and spread over him a spirit of joy and gladness.
When the Man of Halakhah fears Death,
his sole weapon with which to fight this dreadful fear is the eternal rule of the halakhah;
The objective act conquers the subjective terror of death.

Halakhic man is a man of the law and the principle, a man of the statute and the judgment, and, therefore, he always possesses in his being, even if at times it should be afflicted with a deep melancholy, a fixed, firm, Archimedean point that is outside and above the turbulence of his soul, beyond the maelstrom of the affective life, a true source of peace and tranquility. Halakhic man vanquishes even the fear of death, which, as was explained above, is rooted in his world perspective, by means of the law and the Halakhah, and he transforms the phenomenon, which so terrifies him, into an object of man’s observation and cognition. For when death becomes an object of man’s cognition, the fright accompanying death dissipates. Death is frightening, death is menacing, death is dreadful only so long as it appears as a subject confronting man. However, when man succeeds in transforming death-subject into death-object, the horror is gone. My father related to me that when the fear of death would seize hold of R. Hayyim, he would throw himself, with his entire heart and mind, into the study of the laws of tents and corpse defilement. And these laws, which revolve around such difficult and complex problems as defilement of a grave, defilement of a tent, blocked-up defilement, interposition before defilement, a vessel with a tight-fitting cover on it in a tent in which a corpse lies, etc., etc., would calm the turbulence of his soul and would imbue it with a spirit of joy and gladness. When halakhic man fears death, his sole weapon wherewith to fight this terrible dread is the eternal law of the Halakhah. The act of objectification triumphs over the subjective terror of death.

Postscript (March 29, 2017)
I appreciate Professor Lawrence Kaplan’s thoughtful response to my essay. One clarification and one mea culpa are clearly in order before I say anything of substance.

1. Clarification: I did not intend to criticize what is justly a classic that has had an enormous impact on me and so many other students of Torah, and needs no defense. For the record, I also prefer the original Sound of Silence recording by Simon and Garfunkel, and some of their subsequent performances, and at least one Italian street cello version, to the Disturbed cover. But I can’t ignore the latter’s impact.

Furthermore, Prof. Kaplan and I have discussed substantive issues related to the translation in other contexts, and his public intellectual honesty in those contexts has been an inspiration to me.

2. Mea maxima culpa: When I transcribed the Hebrew, I apparently typed אובייקטיבית rather than אובייקטיפיקציה, and then missed the error when I proofread repeatedly, and even when I specifically checked that sentence against the original. The correct version of the original Hebrew text appeared in my article because The Lehrhaus editors caught and corrected the mistake before publication.

My hasidic heritage suggests that this chain of circumstances was designed to teach me humility and charity toward others’ errors, and I will try to take the lesson to heart. I also understand if the error causes others to dismiss the entire project.

3. Prof. Kaplan is correct in suggesting that the mode of translation I employed would not work for the entire book. But I don’t see why this means it can’t work for specific parts of the book. There is room for a much longer conversation here about the meaning of the categories poetry and prose, and how well they map onto translations.

4. I am fully supportive of the idea of producing a full scholarly edition of a revised version of his translation, and if he would have me, I’d love to participate in such a project.

5. All that said, I think the fundamental point I tried to make stands, and I was profoundly gratified by the spontaneous enthusiastic messages I received from scholars and friends I greatly respect. I’m very aware that there were also people I greatly respect who simply didn’t see the point of the effort. That difference of sensibility may be a crucial datum as we engage together in the holy work of trying to build a deeply learned, intellectually rigorous, passionate, and compassionate Orthodoxy that looks forward to yeshuah by building on the past, rather than confining itself to any specific past iteration of the depths of Torah.