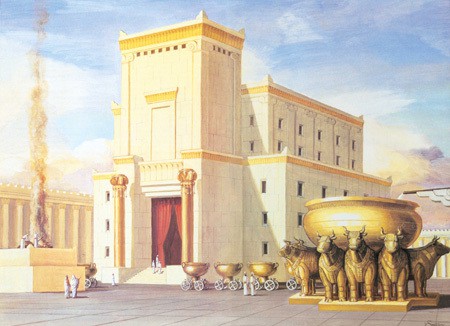 In his article, “Rabbinic Creativity and the Waters that would Consume the World,” Levi Morrow disputes my citing a passage from the Babylonian Talmud (Sukkah 53a–b) as an example of the rabbinic understanding of the Temple as “the capstone which keeps in place the waters of chaos” (Sinai and Zion, 133).

His first objection is that it is “the psalms [that David recites], not the Temple, that restrain the waters in this quotation.” This, however, is a distinction without a difference. A temple is more than a building; it comprises also the rites carried out within the sacred precincts. In David’s time, the Jerusalem Temple, of course, had not yet been built. The “pits” that he dug in this passage, thus releasing the primal waters, were those that were to underlie the future sanctuary; the mishnah that calls forth this discussion in the Gemara, in fact, associates the fifteen psalms that he recited (Psalms 120–134) with a structure of fifteen steps within the Temple complex (m. Sukkah 5:4; b. Sukkah 51b).

Whether literally valid or not, the association makes sense: references to “Jerusalem,” the Temple city, occur five times within those fifteen short poems. Mentions of “Zion,” the Temple mountain, occur fully seven times. One of the fifteen poems, Psalm 122, speaks of a pilgrimage to the Temple; another, Psalm 127, ascribed to Solomon, builder of God’s “House,” speaks of God as the true house/Temple-builder; still another, Psalm 134, seems to derive from the changing of the guard, as it were, in the Temple. All this renders highly unlikely the idea that the efficacy of the psalms David recites to subdue the waters was unconnected to the Temple.

Rather, David is depicted as evoking the Temple liturgically before it existed, just as Jews in the time of the Talmud itself (and into our own day) would evoke it liturgically after it had been destroyed.

Mr. Morrow’s second objection is that “in the full text of the passage from the Bavli . . . this tradition is rejected as failing to adequately explain the relationship between the chaotic waters and the Song of Ascent psalms.” The “full text” that he quotes, however, includes a statement in the name of Rabbi Yohanan in which the psalms have exactly the effect that Morrow disputes: “When David dug the Pits (שיתין), the Deep (תהומא) rose up and threatened to submerge the world, and David then uttered the fifteen Songs of Ascent and caused the waves to subside.”

In order to secure his idea that it was actually “rabbinic creativity” that secured the happy outcome, Morrow disallows Rabbi Yohanan’s statement in favor of the ensuing and contrary tradition that attributes the result to David’s inscribing the Divine Name upon a sherd that he then threw into the Deep, having secured permission to do so from the sage Ahitophel. Even if we accept the claim that the appearance of this variant indicates that the first tradition “is rejected,” my original observation in Sinai and Zion about the Temple as the cosmic capstone stands.

Note that even in the variant that Morrow prefers, the drama takes place at the site of the Temple; it is the name of the God of Israel that subdues the chaotic Deep; and it is the recitation of the fifteen Temple-centered “Songs of Ascent” that converts that erstwhile agent of destruction into life-sustaining waters. This version, too, thus exhibits considerable affinity with the old, cosmological-mythological materials to which I referred in the passage in Sinai and Zion with which Morrow took issue.

Were we dealing in b. Sukkah 53a–b solely with what Morrow calls “rabbinic creativity” and not with the traditions to which I drew attention, the upsurge of the Deep could have been parried with an innovative halakhic insight about, say, the observance of the Sabbath, the laws of purchase and sale, or the dimensions of a sukkah. Fortunately, in interpreting texts like these, we need not choose between the cosmological-mythical dimension and “rabbinic creativity.” Both can be at work, as in this text they indeed are.

Finally, although I am honored that Levi Morrow found something of use to him in Sinai and Zion, I would like to note that I have treated the subject at hand at much greater length in Creation and the Persistence of Evil: The Jewish Drama of Divine Omnipotence, and it is actually in the latter volume that my fullest thoughts on the matter appear.