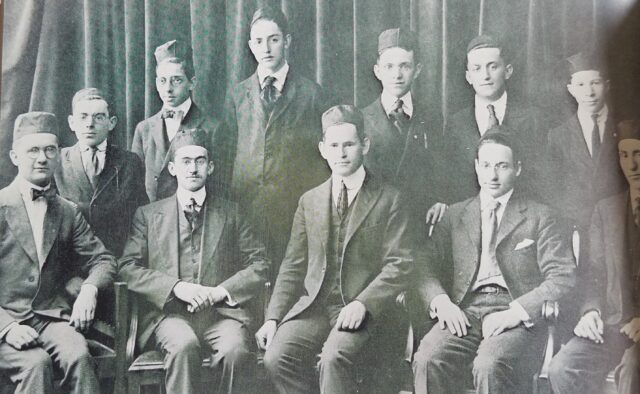 On January 12, 1920, Solomon Hurwitz died in a plague. The thirty-two-year-old fell victim to the insidious Spanish Flu pandemic. Six months earlier, the energetic educator had presided over the Talmudical Academy’s (TA) first high school graduation. As the New York school’s founding principal, Hurwitz handed diplomas to six young men. A few months later, the New York Board of Regents issued a charter to the school, now known as Yeshiva University High School for Boys, or MTA. New York State accreditation was Hurwitz’s last great contribution to the school that he had established in 1916 along with Yeshiva President Bernard Revel. Hurwitz’s efforts assume renewed resonance on the centenary of his death and the present battle with a frightful plague in our own time.

Hurwitz’s is a forgotten name among the pioneering Jewish educators in the United States. He lacked the longevity of Joel Braverman. He did not cultivate pupils like Samson Benderly. He did not develop institutions like Alexander Dushkin. He didn’t have children, nor did he ever marry. But Hurwitz’s legacy is very much worth remembering. “The short life of the late Dr. Solomon T.H. Hurwitz,” memorialized Revel, “demonstrated how much can be accomplished by a man who is faithfully devoted to the ideals and traditions of Israel.”

Hurwitz furnished a modern language for Orthodox education in the United States. In a number of short essays published in the 1910s, Hurwitz addressed the “preservation of harmony between [the student’s] Jewishness and his Americanism.” He aimed to cultivate a curriculum, as he put it, to “bring complete harmony into the life of the child by a proper correlation of the intellectual, spiritual and aesthetic impulses to which he is subject.” All this before Revel spoke of “harmonious blending” throughout the 1920s. Solomon Hurwitz helped lay the foundation for the synthesis-touting champions of Torah u-Madda who received better fanfare during the balance of the twentieth century.

This was an acquired cultural orientation. In 1894, nine-year-old Solomon emigrated with his family from Europe to New York. Like so many immigrant parents, Rabbi Nathan Hurwitz—a “short, stocky, white-bearded, old-world scholar, who knew no English”—enrolled Solomon in public school, where “he always managed to keep at the head of the class.” Save for an occasional afternoon of swimming or basketball, each day after the final school bell rang, Hurwitz “devoted most of his time to the study of the Talmud and the Hebrew commentaries to the Bible,” wrote his friend, Isaac Rosengarten, in a moving obituary.

Hurwitz completed his undergraduate degree at NYU and received a doctorate in Oriental Philology from Columbia University in 1912. He concomitantly supported himself by heading a Hebrew school, working as a librarian in the Department of Jewish Literature at the New York Public Library, running a small synagogue in Long Island and serving as an instructor of Semitic languages at Columbia College.

Hurwitz’s wasn’t just a life of the mind. He got involved in communal affairs, focusing on the promotion of Jewish day schools. Parochial schools—as they were dubbed then, to compare with the Catholic model and its constituents who sidestepped public schooling—were none too popular in the Jewish sphere. In 1914, nearly 40 percent of students attending New York’s public schools were children of immigrant Jews. The only Jewish group that sent significant numbers of youngsters to day schools—like the Rabbi Jacob Joseph School on Manhattan’s Lower East Side—was the Orthodox. Alexander Dushkin opined that the Jewish day school was a “danger for America and for the American Jew.” The amalgam of the public school—those so-called temples of liberty—combined with an afterschool Jewish supplement was in vogue. Jews viewed the former as the best agent of Americanization. “As the public schools system is the rock bottom upon which this country is rearing its institutions,” stated leading Jewish pedagogue Samson Benderly, “so we Jews must evolve here a system of Jewish education that shall be complementary to and harmonious with the public system.”

Hurwitz wouldn’t have any of that. He feared that the “worldliness” offered in these schools was out-of-date, providing a kind of “medievalism.” Teachers prepared lessons on the ancients and Greek philosophy and ignored the modern thinking of Kant’s other moderns who fostered the so-called Enlightenment. He lamented that the afternoon Jewish programs were none too intensive. He was therefore glad to learn in July 1915 that the Rabbi Isaac Elchanan Theological Seminary (RIETS) had just hired Bernard Revel and committed to forming a boys’ high school:

It was a still pleasanter surprise to learn that the Rabbi Isaac Elchannan [sic] Yeshibah, which is now, with its newly erected buildings, entering upon a new period in its history, has elected as its chief the great Jewish scholar, Dr. B. Revel, of Philadelphia, a man whose past is a golden augury of the future progress of the institution. Himself a “Yeshibah Bochur” of the Old World, saturated through and through with Jewish learning (perhaps, with exaggeration, one of the foremost authorities on the Halacha in the whole world), thoroughly imbued with Jewish idealism, well informed of the news of American Judaism—in short, one who is both a rabbi and a Ph.D. at one and the same time—with his work a new period in the history of Jewish education in America is sure to be inaugurated.

Hurwitz’s description of Revel as a broad scholar of multiple wisdoms caught on for others, including Revel, who desired to describe Yeshiva’s new movement. Soon after, Revel hired Hurwitz to steward the Talmudical Academy. The high school opened its doors at 156 Henry Street in Manhattan on September 3, 1916. TA started with about twenty freshmen boys. The students studied Talmud along with the older RIETS students until 3 p.m. The afternoon classes resembled “regular high school studies as prescribed by the Board of Education of the City of New York for the city high schools.”

Hurwitz understood that his was an uphill battle. Many Jewish parents viewed the proposition of sending their sons to a day school patently un-American. In response, Hurwitz argued that his school’s dual curriculum more effectively “smoothes out the path of readjustment to American conditions, for the immigrant child, and, at the same time, preserves a harmony between his Jewishness and his Americanism.” The holistic program could nurture and stretch to the needs of each pupil, adjusting him to his religious and social surroundings.

Naysayers countered that the Catholic analogue—this period was a challenging one for Catholic acceptance in America—was meant to maintain a child’s link to the Old World. Hurwitz concurred, stating that the Catholic parochial school possessed a “purely preservative function” as its teachers attempted to keep the “mind of the Catholic child free from certain pernicious influences which would be likely to pervert his beliefs.” Yet, Hurwitz contended, the Jewish day school has no such “narrowing influences.” Rather, at TA the “life of the Jewish child is made richer and fuller by a systematic and thorough study of Judaism in addition to the regular routine demanded by the public school curriculum.” This way, the “Jewish child emerges from the parochial school with a complete Jewish ‘Weltanschauung.’”

Finally, Hurwitz warned that there were a few drawbacks to Americanization, and that some religious values were not compatible with the New World. He worried about materialism, and the forces that incubated this culture in the public schools. To combat this, Hurwitz suggested that traditional Talmud learning and other intensive Jewish-related classes would provide the “proper correlation of the intellectual, spiritual and aesthetic impulses to which he is subject.” The high school’s finest chronicler, Seth Taylor, has pointed out that the TA faculty concurred with Hurwitz and noted that the first crop of students moved in step with his educational vision. The non-Jewish head of Hurwitz’s English department observed that TA students were interested in developing into “noble men” for whom “big business deals are less important than spiritual ideals.”

The plan worked. Parents “began to send their children to the Academy in increasing numbers.” Families from all sectors of New York’s Jewish community enrolled their children in Hurwitz’s school. “So popular did the high school become,” recalled one teacher from that time, “that students from more than a dozen states in the Union were presently enrolled in it.” By 1925, after Hurwitz had died, the Talmudical Academy boasted a register of 350 pupils.

Solomon Hurwitz served as principal for three and a half years. The Spanish Flu killed more than 600,000 women and men in the United States. Hurwitz perished in one of the final waves of the contagion. His peers mourned the pioneering educator. One Jewish journalist described Hurwitz’s death as a “cruel loss to Judaism in America.”

Hurwitz’s impact was apparent years after his demise. Without Hurwitz, it was up to Revel to extol the virtues of the high school, and then become the leading evangelist of the nascent day school movement. “Out of such schools will come a Jewish youth, with an active and abiding interest in, and a spirit of service to, the cause of Israel, who will help create in this land a Jewish life in harmony with all that is vital in modern civilization,” wrote Revel, echoing Hurwitz. “Such schools, properly conducted, will teach their disciples true Americanism—that of the Declaration of Independence, upon which our country was founded.”

The Talmudical Academy flourished operating with Hurwitz’s blueprint. Standing firm on the infrastructure Hurwitz had designed, 95 percent of the first half-dozen graduating classes passed the New York Regents examinations. By 1928, the school had graduated 387 students, and a large percentage continued to higher education, most often at the City College of New York and later, when it opened its doors in 1928, at Yeshiva College.

More important still, Hurwitz’s day school model was soon after replicated in Baltimore, Brooklyn, Chicago, Cleveland, Long Island, and Los Angeles. These and the many other institutions that preached thoughtful coalescence of traditional Judaism and American life were in some way in Hurwitz’s debt. His legacy overcame the pandemic that halted his life, and a critical reminder of what is at stake and possible as we persevere past our own plague.