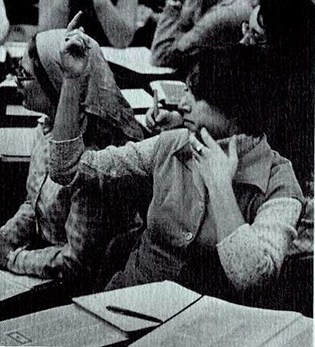 Conjure up in your mind a world in which Rabbi Joseph Ber Soloveitchik ztz”l, founder, philosopher, and halakhic mind of Modern Orthodoxy, had been born a woman. Our community would be utterly different. Josefa Beila Soloveitchik would have studied Tanakh growing up, but she would not have been tutored in the complex methodologies of Brisk. Her incredible soul and brainpower would have been drawn to philosophical inquiry in the university, and there it would have remained, serving the world of the academy alone—or perhaps just her household. The reins of leadership within American Orthodoxy would have been taken up by others, and America’s Jewry would have been impoverished because of it.

Unfortunately, this is not some dystopian novel. This happens in every generation, including our own. Women of brilliance in mind and spirit are born into the Orthodox community, and our community actively deprives itself of their service—not because of their brains or potential, but their gender.

From the youngest ages, women of great potential are disadvantaged in Torah-study opportunities. No co-ed high school or high school for girls offers the same hours of Talmud study as boys are offered at the Marsha Stern Talmudical Academy (MTA). No seminary in Israel provides the same rigor of Talmud study as men are offered at top Hesder Yeshivot. Stern College does not provide anything comparable to the Talmud study programs expected of men at Yeshiva College. The Graduate Program for Advanced Talmudic Studies (GPATS), Yeshiva University’s two-year program for post-college women, requires a fraction of the years and a fraction of the hours of RIETS, the semikha program for men. Men, after ordination, have the opportunity to continue their full-time studies, with a generous stipend, in the Yeshiva University Wexner Kollel Elyon. Women, after graduation from GPATS, might pursue further study in an array of part-time programs, none of which is selective enough to provide a challenging environment for advanced students. Or, women can pursue a doctorate in Talmud, leaving behind traditional modes of study. (Or, of course, they can study at Yeshivat Maharat, which would not be unprecedented.) Despite all the odds, there are a handful of women in the world who have stuck with it. They are, for the most part, underpaid and underappreciated. In America, these women often find their talents valued more by the non-Orthodox world or even the non-Jewish world, and they direct their energies towards those communities. This is a great loss to our own. But we deserve it, because our community up to this point has actively discouraged those who have attempted to create jobs that give dignity and opportunity to learned women.

The real tragedy are the women, brimming with ahavat Hashem and a love of Torah, who desire a career in avodat ha-kodesh but ultimately pursue law, engineering, finance, psychology, or medicine because the Torah world didn’t offer them excellence in training or career prospects. They didn’t want to have to fight for respect, education, or employment. While other paths rolled out the red carpet, vying to recruit these incredibly talented women, the Torah community said, “you are a woman and not worthy of our investment.”

It seems to me that the Orthodox Union’s Rabbinic Panel recognizes this tragedy. They write that “women should most enthusiastically be encouraged to share their knowledge, talents and skills—as well as their passion and devotion- to synagogues, schools and community organizations.” And further, “as a community, we need the best and brightest women- and men- to be motivated and well-trained to pursue careers in avodat hakodesh, whether in schools, synagogues or chesed organizations.”

The Talmud and Midrash record a sentiment expressed by Rabbi Elazar Ben Azaryah in response to a grand statement made by his colleague Ben Azzai.  Rabbi Elazar Ben Azaryah teaches us: words are pleasant when they come from the mouths of those who act on them. Ben Azzai preaches pleasantly but does not uphold his pleasant words (Bereishit Rabba 34, similar to Yevamot 63b).

It is my sincere hope that the Rabbinic Panel of the OU places their full strength and energy into upholding these pleasant words. I hope that this statement heralds a new day, in which the resources of the OU and the Orthodox community are directed towards training, retaining, and employing the best and brightest of the girls and women in our community, just as those resources are poured into our most promising boys and men.