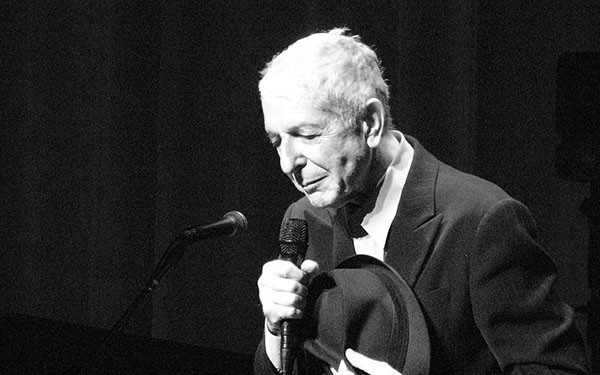 “Our bodies are falling apart and I think I will follow you very soon. Know that I am so close behind you that if you stretch out your hand, I think you can reach mine…Goodbye old friend. Endless love, see you down the road.”

These are the words that Leonard Cohen wrote less than four months ago, in a letter to Marianne Ihlen on July 27th, 2016, just two days before her death. Cohen had had a romantic relationship with Ihlen in the 1960s, a relationship that was immortalized in his song, “So Long, Marianne.” Cohen, a brilliant lyricist who played with themes of mortality and spirituality in a career that spanned six decades, died on November 7th Thousands of his fans have taken to social media to mourn the great musician, but Cohen’s death comes as little surprise to those who have been following his career. In interviews over the past year, Cohen seemed to be preparing for his departure. Only last month, he told a reporter,

“The big change is the proximity to death. I am a tidy kind of guy. I like to tie up the strings if I can. If I can’t, also, that’s OK…I’ve got some work to do. Take care of business. I am ready to die.”

But a few weeks later on October 25th, Cohen recanted:

“I said I was ready to die recently. I may have exaggerated.”

Just as Cohen vacillated in interviews regarding his death, he vacillated in his music as well. His last album, You Want it Darker, captures his ambivalence towards death and God, and the question of what suffering means for those who experience it—and for those who cause it. This is especially the case in Cohen’s dirge-like piece by the same name. The song was Cohen’s final expression of ambivalent anger—and ultimate surrender—towards a God that cannot be ignored, but at the same time, cannot be liked very much either.

In this article, I will explore You Want it Darker by focusing on the religious allusions that Cohen uses as he reflects his ambivalence towards God. I will also consider how this song parallels—and diverges—from one of the most unusual psalms preserved in the Hebrew Bible.

Cohen employed religious material in his music in order to explore issues of identity and mortality in a way that doesn’t, at first, lead the listener to realize that his lyrics are religious at all. Yet You Want it Darker is founded on a religious tradition that galvanized three thousand years of accusations against God. As Cohen accuses God of causing human suffering, we must remember that Cohen is getting in on an existential debate that he knows has been ongoing since the biblical period itself, when Abraham argued with God, accusing Him of ruthlessness towards the people of Sodom, and Moses railed against God when He threatens to destroy the Israelites, and David beseeched God to stop causing him personal pain.  Cohen, of course, is aware of this precedent, and sees himself as an extension of ancient voices who long ago asked questions that could not be answered.

You Want it Darker begins with a personal invective against God that accuses Him of refusing to alleviate the speaker’s suffering:

If you are the dealer, I’m out of the game
If you are the healer, it means I’m broken and lame
If thine is the glory then mine must be the shame
You want it darker
We kill the flame

Magnified, sanctified, be thy holy name
Vilified, crucified, in the human frame
A million candles burning for the help that never came
You want it darker

Cohen doesn’t differentiate between the God of the Jews and the God of the Christians. “Thine is the glory” is mentioned in Jewish texts such as 1 Chronicles 29:11, and also appears in apocryphal texts that were written by Jews but canonized by Christians, such as 1 Esdras 4:59 and Prayer of Manasseh 1:15.

But the phrase is best known as a line uttered by Jesus on his famous Sermon on the Mount, cited in what’s known as the most “Jewish” of the Gospels, Matthew 6:13.  The religious ambiguity that Cohen is consciously creating by making allusions to various religious traditions will extend into the song’s later lyrics.

Cohen sees human suffering as inherent to the scriptures, and one that by definition is characterized by paradox. Who is morally responsible for the speaker’s pain? A compelling argument can be made for any one of the three parties involved: God,  the ominous “they” that will be referred to later in the poem, or even the speaker himself:

Cohen’s confession that he didn’t know he had “permission to murder and to main” suggests that people are killing others in God’s name, using their faith as a means to justify violence.  When I first heard the phrase, I thought that it was an admission of guilt: Cohen had done something terribly wrong. But upon reaching the end of the song, I realized that this line is more about God than about Cohen’s past regrets. By causing human beings physical harm, and death, God gives human beings implicit permission to do the same. After all, Imitatio Dei is a concept that transcends Judaism. This line, then, is not about anything that Cohen has done. It is about what God has done.  And when it comes to human beings causing people harm in the same way that God has, Cohen lays the responsibility of human evil at God’s feet: If you wanted things different, God, you would have made it so.

The last stanza makes the relationship between divine evil and human evil explicit:

Magnified, sanctified, be thy holy name
Vilified, crucified, in the human frame
A million candles burning for the love that never came
You want it darker
We kill the flame

By mixing Christian and Jewish symbolism into one image, Cohen transcends religious denomination. The first line derives from Jewish liturgy, which itself is derived from Psalm 92:2 and 99:3. It is coupled with the second line, which recalls the Jesus’ death. This coupling signifies how human violence has been used as a vehicle to sanctify God’s name. The last two lines make this clear: God intends for humans to suffer, but it is human action that sees it through.

If you are the dealer, let me out of the game
If you are the healer, I’m broken and lame
If thine is the glory, mine must be the shame
You want it darker

The process of confronting God was ultimately all that Cohen needed to come to terms with his vulnerability. The song closes with an affirmation of the opening lines:

In a number of reviews of this song following its release, critics assumed that Cohen’s song is a negative commentary on organized religion. But I’m not convinced. Cohen’s beef is not with organized religion; it’s with God himself. God allows suffering, and while people cause suffering in His name, ultimately it is God Himself who has to answer for these human crimes.

In the end, however, Cohen recognizes that his mortality is something that he has no choice but to accept. God is still addressed “my Lord:” God exercises control over Cohen, and Cohen accepts that he is in the dark—in the dark about how the world works, and in the dark when it comes to his own mortality.

“You Want it Darker” is not the first Jewish work to force God to stand in judgment. In fact, there is biblical precedent for this model. Psalm 39, which is attributed to King David, accuses God of disinterest when it comes to the suffering of his creations. There is a frustrating ambiguity that clouds the meaning of this unusual psalm. While the speaker is clearly in great pain, it is unclear who is responsible for causing this pain. At times, it seems that God is the one who is directly causing David to suffer (see v.10; “I am worn down by the blows of your hand),” but at other times it seems that David is most concerned by the deeds of the wicked, coupled with God’s refusal to intervene (see v.1; “I will keep a muzzle on my mouth as long as the wicked are in my presence.” )

The psalm, however, is addressed not to the wicked; it is addressed to God. Regardless of who is the direct perpetrator of evil, God or wicked people who are causing human suffering, David holds God responsible. And this responsibility correlates with God’s general indifference towards the brevity of human life. God’s indifference is first referenced as simply a reality that the speaker has to deal with. But later in the psalm, this reality is amplified into an accusation. Compare verses five and eleven:

39:5: You have made my days a few handbreadths,
and my lifetime is as nothing in your sight.
Surely everyone stands as a mere breath.

39:11:  ‘You chastise mortals
in punishment for sin,
consuming like a moth what is dear to them;
surely everyone is a mere breath.

In 39:5, the speaker only states that God has made human life brief. But in 39:11, the speaker argues that the brevity of human life is what makes God value the human experience so little.

In the end, no resolution is achieved. The speaker concludes that any relationship between the human and the divine will inevitably lead to suffering, because this is the inherent nature of a relationship characterized by a disparity of power:

before I depart and am no more.’

Cohen’s song thus reaches a startlingly different conclusion than the lament of Psalm 39: Whereas the biblical author concludes that a person cannot have a relationship with God that does not involve an intensely painful experience, Cohen surrenders to a relationship in which he will forever be in the dark—because that’s how God wants it.

Like many devotees of Cohen’s music, I feel a connection to him that, when I listen to his music, seems unique. Of course, the feeling is not unique: all people in some way or another are coping with the reality that they are going to die, and if they are religious, they must also face the task of cultivating (or neglecting) a relationship with God that more often than not seems one-sided. The irony of feeling so connected to Cohen because of his lyrics, lyrics that reflected his intense existential loneliness, makes his absence all the more painful for those who found comfort in his music.