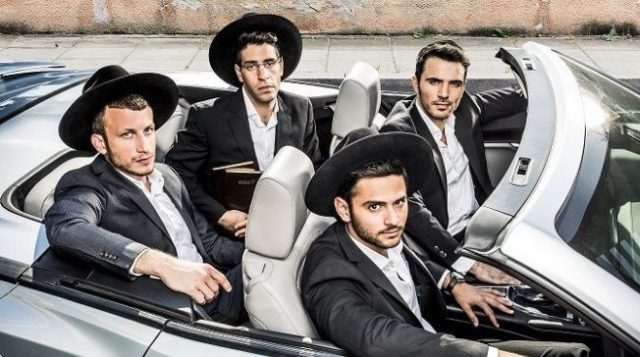 Israel has produced several fabulous television series in recent years, perhaps especially those which depict fictional lives of religious Jews. These include the iconic Srugim, which tracks the Friends-like relationships between a group of single friends navigating the South Jerusalem “national religious” dating scene. The entertaining, if somewhat melodramatic, Kathmandu follows the legitimately exciting lives of a Chabad couple living and working in Nepal.

Shtisel, both hysterically funny and understated, set a new bar for subtlety and depth in exploring the dynamics of a rather dysfunctional but wholly endearing hasidic-haredi family in Jerusalem. Shababnikim, one of the latest additions to the mix, is a slickly produced and fast-paced series that chronicles the adventures, both external and internal, of four twenty-something denizens of an elite haredi yeshiva in Jerusalem. The aesthetics, four studs sauntering off to some irrelevant destination with the backdrop of a throbbing rock soundtrack, recalls the HBO series Entourage. The substance spans the gamut from romantic comedy to profound observations about Judaism, the relationship between the religious and secular worlds, and what it means to be a man. In other words, it’s the kind of series that could only exist in present-day Israel, and it’s the invention of a talented religious graduate of the Ma’aleh film school named Eliran Malka.

“Shababnik” is derogatory Israeli slang for a “batlan,” a time-waster—that is, a young haredi Jew who is exempted from military service but nevertheless falls far short of the declared reason for the exemption: “His Torah [study] is his occupation.” Instead, a shababnik spends much of his time just hanging out aimlessly. The eponymous shababnikim of the show straddle the border between this category and more serious yeshiva bochrim. They appreciate the good life, but they also, in different ways, maintain sincere connections to the world of the yeshiva, and each is a spiritual seeker in his own way.

Avinoam, the son of a prominent Sefardi parliamentarian, is drawn to the mystique of the secular world, and one cute female barista in particular. Despite his white shirts and black hat, he craves to be a part of the broader Israeli culture. He is also a born leader, and his ambition manifests itself more loftily at some times than others.

Dov Lazer is the clever, bemused son of a wealthy American haredi (Ashkenazi) businessman; more than the other shababnikim he displays analytical prowess and a sophistication of thought, but he is plagued by disaffection.

Meir is a religiously sincere heartthrob of working-class North African descent. He encounters obstacles because of his lack of “yiches” (pedigree) in a stratified culture that places great weight on small differences in practice and outlook, and is also plagued by ethnic prejudices. Meir’s mode of Torah study, although intuitive and thoughtful, is not taken seriously in an elitist Lithuanian-style yeshiva, with its emphasis on rigorous erudition.

Gedaliah is the red herring of the group—a brilliant and overly passionate talmid hakham whom the mashgiach (spiritual supervisor) of the yeshiva moves into the dorm room of the other three, with the hope that exposure to their worldly ways helps him overcome some of the intensity and painful awkwardness that were scaring away prospective wives. They are all four essentially well-meaning young men with real talents. They each struggle with religious and social expectations as well as with their own laziness, selfishness, and confusion. More than anything, they need to grow up, and the show explores the viability of the yeshiva as the right place to do that.

The electricity of the yeshiva environment, and by extension, the excitement of Torah learning itself, is something that is by its nature difficult to translate into a different medium. Television might very well be the most unlikely candidate, and yet somehow Shababnikim pulls it off. The show captures the energy of the fictional “Nesivos” yeshiva from the very first scene, when the venerated rosh yeshiva, Rav Bloch glides into the beit midrash to looks of adulation from adoring students and launches into a potentially fascinating Torah discourse, only to be tragically killed by an elegant chandelier, which crashes on his head only moments after he begins.

His replacement is the decidedly less magnetic Rabbi Shpitzer, who implements a variety of quasi-sadistic austerity measures aimed against the culture of decadence, embodied first and foremost by the shababnikim of the show’s title, that he thinks is dragging down the yeshiva. The ensuing battle takes place not through physical might, of course, but through words and ideas. Shpitzer is fond of rambling, romanticized stories of Eastern European Jews from the past who were disciplined and committed to their Torah studies. He combines this with a vapid corporate sensibility that emphasizes hours spent in the study hall over the quality and texture of Torah learning (though this does not, of course, prevent him from taking a condescending attitude toward Meir’s folksy, commonsense attitude toward Torah study).

It is true that there is something to simply showing up, but later on in the show, when Rabbi Shpitzer is asked if the majority of his students learn with “esh,” with fire, he is predictably unable to respond. The shababnikim in turn, are all fire: passion for Torah, passion for women, pride in the life of Torah and sensitive to any slight of it, and passion for life outside the yeshiva, which, not surprisingly, rarely lives up to expectations.

One of the series’ refrains is that the disorderly shababnik model of yeshiva life may seem like a “jungle” to some, but that “only in a jungle can you produce lions.” Ideally, intense Torah study does not produce automatons who merely follow the masses—rather, independent young men who are guided by Jewish principles but use their own judgment to make wise decisions and fiercely defend the honor of Torah when necessary. It’s a delicate balance that is difficult to master. After all, the secular world is hardly equipped to produce “lions” either—a lack of restraint and focus is even more crippling than too much authority, as Avinoam will discover by way of a broken heart.

Midway through the first season, Dov Lazer gets into a scuffle, literally in the middle of a minefield, with a patronizing army officer his own age. It is unclear whether he escalates what could have been a minor encounter into a full-blown argument in noble defense of haredi culture or out of his own brash arrogance and pride. The shababnikim think that they are pretty great after winning an unevenly matched football game against a group of buff Americans. What will, however, actually make them great is if they learn to harmonize the impulses flowing from their youthful energy with their elite Torah education in order to behave in ways that elevate themselves and the world around them. The show documents their numerous failures in this regard, as well as their precious moments of success.

Yeshiva boys of a certain age are defined primarily by their vocation of Torah study, but also by their pursuit of an eligible girl to marry. Here the world of the Nesivos yeshiva dovetails most conveniently with the sensibility of romantic comedy. Indeed, for yeshiva bochrim in their early twenties trying to concentrate on learning while hormones rage and set-up dates with beautiful women beckon, tension is inevitable.

Rather than fall into the trap of false binaries, Shababnikim successfully conveys the eros that is at the heart of haredi Judaism, with its rigid separation of genders and its appreciation for human nature and its pitfalls. The time that these men spend in yeshiva does not dullen their eros; it only serves to heighten it. This places marriage in the foreground of their young lives in a way that is actually productive.

Gedaliah suffers the most from this predicament; as the most cloistered of all four of the friends he is also the most frustrated, and even borderline insane, when it comes to the proper way to relate to women. For him, Torah study is a way to channel some of that tormented energy; after yet another disastrous encounter with a young woman, he gazes lovingly at a volume of Talmud and exclaims that “she” remains his most beloved. Ultimately, once the proposition of a truly fulfilled marriage becomes a real possibility for Gedaliah, we sense that perhaps of all four main characters, Gedaliah actually has the most romantically satisfying future ahead of him.

Another key theme that pervades the series is a traditional religious one: perfection is not an attainable goal, and the outright denial of one’s desires will not help achieve whatever progress can be made toward it. Instead, the channeling of those desires in the appropriate manner leads to the best possible outcomes for spiritual and personal growth. Perhaps the strongest expression of this takes place in the season finale, when a local Jerusalem sage-cum-oracle, Rabbi Alter Cooper, is called upon to adjudicate a dispute between Shpitzer, who views the shababnikim as utterly worthless, and his rebellious students. The holy Rav Cooper is unimpressed by the antics of the shababnikim.

However, he is even more unimpressed by Shpitzer and his two dimensional ideal of the yeshiva student: “If God wanted to make a world filled with only tzadikim, He would have!” he yells at Shpitzer, “that doesn’t interest Him!” Rav Cooper continues, “God wants you to be different.” Precisely what form that difference should take, whether it should conform to certain social boundaries or whether it may involve stepping beyond them, does not interest Rav Cooper. That is where free will steps in for those young lions brave enough to face down the jungle of real life and redeem themselves and their world in the process.