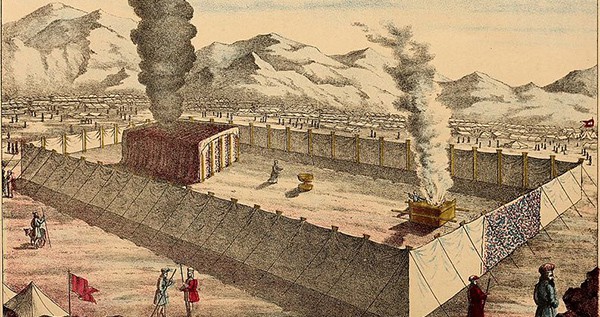 We think of spirituality as ascending the great heights of the otherworldly. But consider Sinai. And consider the Mishkan.

God appears at Sinai just after the people create a system of courts. They establish judges over tens, over fifties, over hundreds, over thousands, to judge between a man and his fellow.
And, as Rav Soloveitchik points out, God comes down to the mountain.
The people never climb Mount Sinai.

God commands that we build the Mishkan—the place in which God will dwell among us — just after we have agreed to His Laws of Justice: the rules for the proper treatment of slaves, and of the responsibility we bear toward women and men.
Then, too, we do not ascend up to God.
God dwells with us.

We think of spirituality as ascending the great heights.
But in reality, we establish a community of Justice; through this community, we make a place for God.

i
In Egypt the people must search far and wide
to find straw to make bricks
to fill their quota for building Pharaoh’s treasury houses.

Pharaoh is not Pharaoh’s wealth
but Pharaoh’s treasury represents him.

The people are not units of work
but the quota of work defines them.

The straw will be used for the bricks
but the straw is not there.

And the bricks do not yet exist.

These people are slaves to faraway concepts,
slaves to representation.

ii
For the Mishkan where God will dwell
the people offer different and beautiful things:
gold, silver, and copper;
blue, purple, and crimson yarns;*
they offer their own personal skills:
spinning of the loom
forging of metals
crafting a home for God’s real presence
that will dwell in this tent.

iii
Enslavement is a world of symbol:
a life is not a life;
a life is a stand-in for so much work.

It is not unlike idolatry:
a piece of stone
standing in for the god.

The Mishkan is not enslavement
and the Mishkan
is not idolatry.