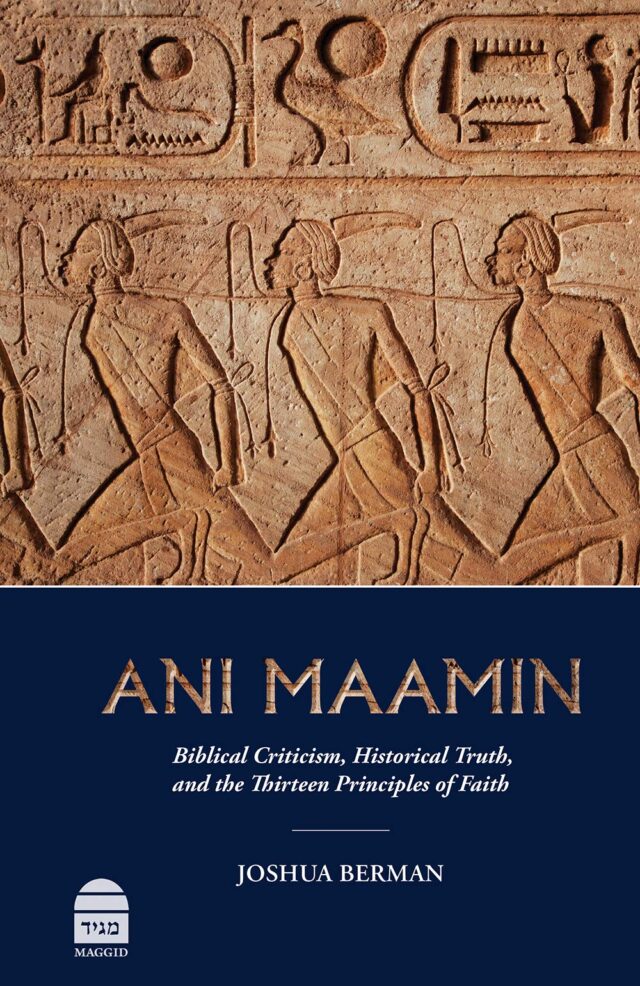 Berman divides the book into two parts. Part I, “The Tanakh in Historical Context,” deals mainly with the necessity to read and appreciate Tanakh in its Ancient Near Eastern context, the historicity of the Exodus from Egypt, and challenges posed by academic biblical source criticism to the divinity of the Torah. Part II of the book, “Appreciating Principles of Faith and the Principle of Torah from Heaven,” traces Judaism’s principles of faith, particularly concerning the origins of the Torah, from the Mishnah and Gemara, through Saadia Gaon and Rambam’s Thirteen Principles of Faith, and on to the reception history of Rambam’s principles in later halakhic, liturgical, and homiletic compositions.

Part I draws substantially on lengthier and more detailed discussions in Berman’s previously published academic work, particularly his Inconsistency in the Torah: Ancient Literary Convention and the Limits of Source Criticism (Oxford University Press, 2017), presenting the material in more popular and concise form in this book. One chapter (Chapter 7) summarizes the arguments of Berman’s Created Equal: How the Bible Broke with Ancient Political Thought (New York: Oxford University Press, 2008). Far from constituting unnecessary duplication of previously published material, this strategy is fully justified and indeed necessary. What Berman has to say in Part I of Ani Maamin is of great importance for thinking Orthodox Jews. It would have been most regrettable for this substantial global community to miss out had Berman’s audience been restricted to his fellow professionals in the field of academic biblical studies. By presenting his analyses and conclusions in a serious but accessible way in this new volume, Berman’s main lines of argument come through clearly and elegantly to that wider readership of reflective Orthodox Jews. Those who want further detail and a full scholarly presentation can go on to learn more from Berman’s previously published academic writings, which I, for one, certainly plan to do.

A central claim of Part I is that the Tanakh, including the Torah, must be read in its ancient context and in particular in light of the literary conventions of the Ancient Near East, not through the anachronistic literary canons of nineteenth-century source critics and their contemporary successors. Berman mounts an utterly convincing scholarly assault on source criticism (also often referred to as “Higher Criticism”), the attempt to identify hypothesized pre-existing sources from which the Torah is supposedly composed. In Chapter 5, for example, Berman makes a devastating case against the methodological assumptions of source criticism using the example of the Flood narrative of the Book of Genesis. Berman importantly goes beyond defensive mode in also showing how rejecting the postulates of the source critics and approaching the Torah as a unitary composition can facilitate deeper understanding of and insight into the text. An example is Berman’s brilliant demonstration of the extended and intricate chiastic structure of the entire Flood narrative of Genesis chapters 6-9.

In Part I, Berman also defends the historicity of the Exodus. His robust defense of a literal reading of yetziat mitzrayim coupled with his argument, based on evidence from the Torah itself, that the Torah’s statement that there were 600,000 men of fighting age leaving Egypt should not be taken literally, may prove to be too “left wing” for some and too “right wing” for others. But this is exactly where an informed Modern Orthodox approach to the historicity of the Torah’s narratives should be: deploying expert academic knowledge in defense of our traditional understanding of Torah, yet prepared, when the evidence is strong enough, to view some details in a new light.

This brings us to a central point which we can illustrate with further reference to Part I of the book. Berman demonstrates the many parallels between the Kadesh Poem of Ramses II, a long inscription celebrating Ramses’s victory over the Hittite empire at the town of Kadesh in 1274 BCE, and Exodus Chapters 14-15, the narrative of the splitting of the Yam Suf and the Shirah. Berman persuasively argues that the evidence suggests the antiquity of the Shirah and its dating at the time of Ramses II as an act of cultural appropriation. What Berman does not note in this discussion, or at any juncture in the book, is the obvious point that a significant shift of perspective is required here. Prior to being aware of the parallels between the Shirah and the Kadesh Poem of Ramses II, we, traditional Jews over a period of millennia, took the Shirah to be a totally original composition, fashioned, as it were, out of whole cloth. Given our recently-gained knowledge of the Ancient Near East, we now realize that it is very plausible to understand the Shirah as a piece of cultural appropriation. As Berman shows us, the Shirah uses the language and themes of ancient Egyptian literature to portray God as far outdoing the greatest achievements of Pharaoh. This new perspective in no way undermines traditional belief in divine authorship of the Torah or its traditional dating, but we should acknowledge that it constitutes a significant shift in our understanding.

Similarly, when Berman cites the visual parallels between Rameses’ throne tent and the Tabernacle as supporting the historicity of Exodus, his argument is persuasive, but again we should acknowledge that a perspectival shift is involved in understanding the design of the Mishkan in this derivative way rather than as the totally original divinely-commanded design that the generations preceding us took it to be.

Again, in his discussion of the Genesis Flood narrative, Berman identifies, on the basis of contemporary academic biblical scholarship, no fewer than seventeen plot elements common to the Gilgamesh and Genesis Flood narratives. Moreover, these appear in both texts in precisely the same order. Berman concludes: “Rather than claiming that the Genesis Flood account represents the redaction of two pre-existing sources, we should maintain that the Torah’s account represents a significant reworking of a well-known Mesopotamian template, but now in accordance with the Torah’s ideology” (120). Here again Berman has shown how Ancient Near Eastern texts, a significant feature of academic biblical studies, can be deployed to radically undermine another, namely source criticism. But here too we should acknowledge the perspectival shift. Previous generations of traditional Jewish believers viewed the narrative of the mabul as created, as it were, ex nihilo – but we must now understand that narrative as a deliberate reworking of an earlier text. The broader point concerning Berman’s book is that while he shows to great effect how questionable source criticism is on multiple levels, he does not fully acknowledge the challenges posed to traditional understandings of some parts of the Torah by our knowledge of the Ancient Near East, as well as the benefits it brings. Those challenges are surmountable, but they need to be explicitly recognized and addressed.

On other occasions our knowledge of the Ancient Near East deepens our prior understanding of Torah without generating a sense of discontinuity with the ways in which previous generations of Jews understood the text. Berman shows how, for example, awareness of the structure and content of Ancient Near Eastern vassal treaties enhances our understanding of the covenant of Sinai, the mitzvah of aliyah la-regel, and the overall structure of the Book of Deuteronomy, as well as our appreciation of how these parts of the Torah would have impacted powerfully on the Torah’s first recipients, who lived in a world in which vassal treaties were a central feature of political life. Berman also utilizes the historical prologues characteristic of vassal treaties to explain inconsistencies between narratives in the Book of Deuteronomy and the rest of the Torah in an ingenious way. Discrepancies between narrative details are not contradictions but quite deliberate indications of God’s displeasure with Israel subsequent to her lack of fidelity as a vassal in the wilderness years.

Aside from the larger strengths of the book, Berman often provides valuable small nuggets along the way. Close to the beginning of the book, for example, he rightly castigates self-identifying Orthodox Jews who “proclaim acceptance of ‘the findings of biblical criticism’’’ without any attempt to subject biblical criticism itself to appropriate critical scrutiny and submitting, as Berman very cleverly puts it, to “Daas Mada” (xviii). I also enjoyed the brief but fascinating insights from an insider into the double standard applied in the academy to the Bible and comparable ancient texts as well as Berman’s remarks concerning the influence of conservative versus liberal culture wars on academic biblical studies.

Part II of the book is a little shorter than Part I. Berman’s discussion of Rambam is particularly impressive in its detail and depth, and I learned much also from his often fascinating reception history of Rambam’s Thirteen Principles. Part II, like Part I, also contains much excellent analysis. It is unclear to me, however, precisely what the relationship is between the first and second parts of the book. Obviously, some of the issues addressed by Berman in Part I constitute potential challenges to Rambam’s Eighth Principle of Torah from Heaven, but exactly how the discussions of Part I and Part II are intended by Berman to relate to each other remains somewhat unclear.

The book is also open to some minor criticisms on assorted particular issues. First, it would have been helpful for Berman to explicitly distinguish traditional Jewish beliefs concerning the origins and composition of the books of Nakh from those that relate to the Torah itself. Second, the discussion of Chapter Six seems to depart to an unnecessary degree from the central focus of Part I by discussing the halakhic process down through the ages and raising very large issues concerning change in contemporary Halakhah. Third, Berman argues in Chapter 7 that the Torah’s revolutionary political thought “reveals its divinity.” It seems to me that the argument is framed too ambitiously here. Certainly, the equalizing political, social, and economic prescriptions of the Torah are very striking when compared to the rest of the Ancient Near East, but this does not constitute, in philosophical terms, a sufficiently strong argument for the Torah’s divinity. Fourth, Berman’s Afterword provides a close and illuminating reading of the episode of tanur shel akhnai but it is unclear to me how this helps deal, as Berman seems to think it does, with challenges from academic biblical studies to traditional belief other than those stemming from Lower Criticism.

Any points of criticism notwithstanding, Berman has written an important book, both in terms of its highly informed treatment of academic biblical studies from an Orthodox perspective and its wide range of valuable insights on topics central to the concerns of thinking Orthodox Jews.

Sharpening the Definition of Holeh Lefanenu: The Diamond Princess and the Limits of Quarantine