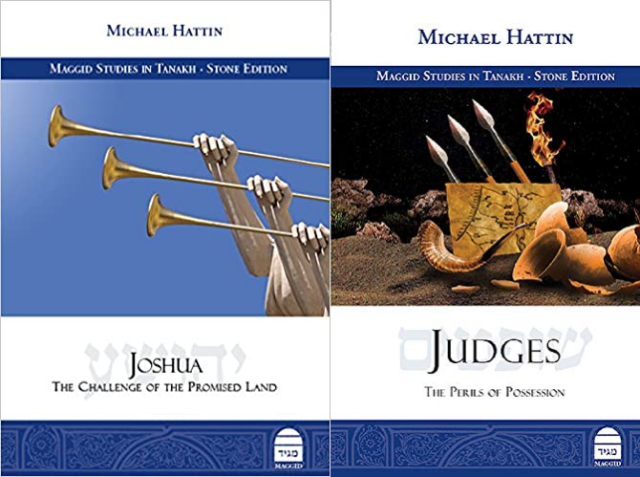 Review of Joshua: The Challenge of the Promised Land and Judges: The Perils of Possesion by Rabbi Michael Hattin (Jerusalem: Maggid Books, 2014 and 2020)

Nechama Leibowitz’ warning about hastily adding to the glorious Biblical commentaries of the past notwithstanding, Maggid Books has provided an invaluable service in its—still in progress—series of Studies in Tanakh. To the best of my knowledge, it is the first complete chapter-by-chapter Tanakh study companion in English designed for sophisticated Jews who wish to deepen their engagement with the text. It is in this context that we find two particularly interesting and insightful volumes on Joshua and Judges by veteran Bible lecturer Rabbi Michael Hattin.

Hattin’s approach is defined by two parallel endeavors. The first is to teach the major themes as culled from the Jewish interpretive tradition. That means that he constantly reminds us of how different sections were understood in the Talmud and by the classical commentators (giving pride of place to Rashi, Radak, and Ralbag). The other major strand of his work is to provide new and creative readings strongly anchored in the text, thereby providing a new layer of interpretive activity that expands upon and provides additional depth to the messages of the past.

There are several added bonuses as well. The most important is Hattin’s willingness to draw contemporary conclusions from his readings. For example, he compellingly frames the conquest and settlement of the Land of Israel in the two first books of the Nevi’im as a “challenge of how to respond to pervasive cultural and moral values, incompatible with our mission as a people.” Another positive feature is his familiarity with Ancient Near East Studies. While he sometimes makes claims that would be rejected by most scholars in that field, his knowledge here allows him to cull material that meaningfully adds to our study. Finally, Hattin displays a pleasant yet sophisticated writing style that respects his readers while keeping them engaged.

Getting back to the two main strands of Hattin’s approach, one is reminded of Netziv’s foundational Ha’amek Devar commentary on the Torah. Though this is probably the greatest compliment I can think of offering a contemporary commentator, the comparison also comes with a downside. For even though Netziv’s brilliant interpretations have changed the way most of us understand significant portions of the Torah, there is no question that he also not unfrequently engaged in highly speculative readings.[1]

In this manner, Hattin also allows his creative juices to flow, treating us to some truly fascinating readings along the way. His comparison of Joshua’s decree against taking booty from Jericho (Joshua 6:16-19, 26) to the laws of an idolatrous Jewish city (Deuteronomy 13:13-19) puts a new spin on the reason for Joshua’s prohibition. Indeed he draws two important conclusions from the similarities in the laws and wording of these two passages. The first is that the war being waged against the Canaanites is primarily an ideological war meant to uproot idolatry from the Jews’ new habitat. Coming off of this conclusion, the second is that with such an understanding, “an Israelite city that endorses idolatrous worship is no different than its Canaanite counterparts and will suffer the same ignominious fate” (Joshua, p. 113).

Likewise, Hattin dips into the Talmud’s (Sotah 2a) rationale for the juxtaposition of the sotah and the nazir in the Torah to explain the otherwise inexplicable need for Samson to be a nazir. Hattin claims that just as the Talmud recommends nezirut as a way to internalize the shock of the moral degradation of a woman who has become a sotah, so too is God imposing nezirut here as a way to get the Jewish people to recognize and internalize their own moral degradation at this low point in Biblical history. Particularly fascinating is the related understanding of Samson’s ambivalence about his unchosen nezirut as parallel to how the Jews of the time felt about the higher calling that they, too, had not chosen. But, as Hattin explains, it is a calling that Samson and the Jews must ultimately embrace, if they are to be true to themselves.

However, the flip side of Hattin’s creativity is that it leads him to develop theories that rely on little objective evidence. One example is his division of the Judges into three symmetrical groups, in which each group of four represents a spiritual decline from its predecessor. Hattin adds that the number twelve is no coincidence. Being the number of tribes, it reinforces the tribal nature of the book’s contents as a whole. The only problem is that most of us would count fifteen Judges. Assuming one can pare off the first (Joshua) and the last (Samuel, who would put a giant monkey wrench into the neat pattern of decline) by giving them some sort of special status, one is still left with thirteen, one too many. Here Hattin pulls a masterful stroke and tells us that the despicable Avimelekh (who would also create a problem by not fitting into the morally intermediate group) doesn’t count. Perhaps. However, even if we get to the number twelve, the overall theory of decline still requires—among other questionable determinations—making Shamgar into a great and noteworthy Judge. But he was not, which is the obvious reason for only one verse (3:31) being devoted to his leadership. But because this inconvenient fact does not fit the theory, Hattin works overtime to make something out of next to nothing here.

If some interpretive mistakes are the price we must pay for new and creative readings, I believe it is well worth it. Rare indeed is a writer who engages in one without the other. But there is something missing in this equation. Netziv was a pioneer in the field. Indeed, there was no true field of creative and literary exploration of Tanakh in his time; his observations were geared primarily to yeshiva students who had little time or inclination to focus on Tanakh. Today, one would think the situation to be vastly different. There are many religious scholars devoting serious efforts to the study of Tanakh, not to mention all of their serious students. Should novel ideas not be bounced off of some of them before committing them to print?

I don’t blame Hattin for his books’ lack of proper vetting, as it is part of a larger problem endemic to the field: the lack of creative collaboration. Hence it is also not unusual that he does not mention any other contemporary commentators. While he occasionally refers to modern scholars as a group, I do not recall a single citation of one by name.[2]

This is an issue that we must all try harder to address. For when Tanakh writers are not well-versed in each other’s work, it creates a cacophony of competing claims that fail to address the challenges created by each other’s readings. The result is a squandering of much of the benefits made available from the blessed expansion and development of Tanakh study in our times.

So while Hattin’s work reflects many of the positive trends in contemporary Tanakh study—showing how far we have come from when there were only a handful of traditional creative voices in the field—it also shows the challenges that still lie ahead.

[1] An example of the former is the framework that Netziv builds for the Book of Numbers (and related sections in Exodus and Deuteronomy as well)—summarized in his introduction to that book—through which he reads the book as one of radical transition between living in the immediate presence of God in the wilderness and preparation for a more natural spiritual life that the Israelites would experience in the Land of Israel. An example of the latter would be his attribution of various characteristics to the tribes that appear to have little basis in the Biblical text. This is most pronounced in his Darkhah shel Torah, but is also expressed in various places in Ha’amek Devar, such as his comment on Deuteronomy 3:17 that half the tribe of Manasseh was sent over the Jordan as a positive influence on Gad and Reuven. While the text certainly indicates that the two tribes that asked to settle in Transjordan needed a positive role model, one would be hard pressed to see why Manasseh should have been designated for that task.

[2] Perhaps even more serious is the presentation of an idea without mentioning the fact that it had been previously discussed by another writer. One example of this is Hattin’s fascinating suggestion that Yiftah actually wanted a human sacrifice when he made his infamous oath. This idea, however, can be traced back to R. Yigal Ariel in his earlier book, Oz ve-Anavah (Hispin: Midreshet HaGolan Press, 1995), pp. 282-3. It is not uncommon for any of us to hear or read an idea and have it re-emerge much later as our own, having forgotten the ultimate genesis of the thought. But that is where vetting by the scholarly community comes in. Had such a process properly been in place, it is highly unlikely that this would have gone unnoticed before publication.