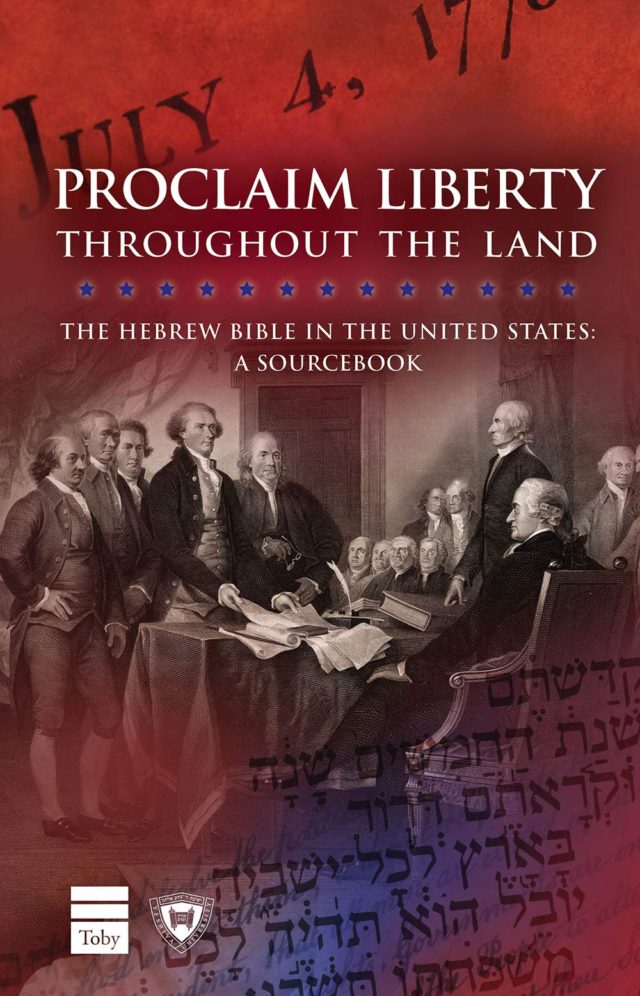 In 2007, journalist A. J. Jacobs published The Year of Living Biblically, a satirical account of the author’s year-long “quest” to follow the Bible as literally as possible.[1] This endeavor, which included “stoning” an adulterer with pebbles, humorously highlights the dissonance between contemporary American society and the biblical past. In an era of increasing secularism and biblical illiteracy, the Bible strikes the modern reader as an ancient, irrelevant text. However, this phenomenon belies the long and venerable American biblical tradition. The Bible was a deeply important text in American history, so significant that intellectual historian Perry Miller posited, “The Old Testament is truly so omnipresent…that historians have as much difficulty taking cognizance of it as of the air the people breathed.”[2] Yet the newly-edited anthology Proclaim Liberty Throughout the Land indeed takes cognizance of this omnipresence. Proclaim Liberty, produced under the auspices of Yeshiva University’s Straus Center for Torah and Western Thought, offers a collection of primary sources to center the Hebrew Bible in the story of the United States.

The editors—among them Meir Soloveichik, Director of the Straus Center and Rabbi of Congregation Shearith Israel in New York—largely succeed in demonstrating their overall argument: “One cannot understand the American political tradition and its articulations through time without understanding American’s relationship with the Hebrew Bible” (p. xvii). Drawing on recent scholarship such as Eran Shalev’s book American Zion,[3] Proclaim Liberty justifiably brings attention to important documents and makes lesser-known ones accessible to a popular audience. However, by situating its sources within the framework of Jewish thought, Proclaim Liberty raises fundamental questions about the meaning, nature, and significance of the American biblical legacy.

In the introduction, the editors stress that their book “is not a volume about the Jewish experience in America,” given the paucity of Jews in American history. Additionally, they distinguish between the Hebrew Bible and post-biblical Jewish thought, which encompasses a much wider corpus of texts. “The traditional American passion for the Hebrew Bible is distinct from the Jewish religion and the history of Jewish law and letters.” Puzzlingly, however, while they acknowledge the Christian origins of this passion, the editors insist that the “metaphors, images, and narrative arcs that Americans have taken from the Hebrew Bible to describe their own experience are distinct from, and cannot be fully encompassed by, Christian theology (p. xviii).” The latter assertion perhaps reflects the interest of the editors, of their institutional affiliations, and of the press in disseminating material that highlights the confluence of Jewish and secular thought.

Indeed, the most notable editorial feature of the volume is the inclusion after each source of relevant citations from the Hebrew Bible, with the original Hebrew text followed by the King James translation. The editors also occasionally included and translated sources from rabbinic Jewish literature, even though very few authors cited in Proclaim Liberty could read Hebrew or rabbinic texts.[4] In doing so, the editors seem to appropriate a Christian tradition for an American Jewish legacy. While this editorial feature creates a rewarding theological exercise for Jews interested in American history, it obscures the fundamentally Christian nature of much of the material, even when the translations or interpretations appear to overlap with Jewish thought.

The anthology’s section on Puritan New England illustrates both the extent of the Hebrew Bible’s significance in this chapter of American history and the limitations of its relevance to Jewish thought. The Puritans attempted to create a biblical society modeled after ancient Israel, and several of the legal systems in the New England colonies drew substantially upon Mosaic Law—a phenomenon partially documented in Proclaim Liberty. The editors could have gone further in documenting the centrality of the Hebrew Bible in Puritan New England: the Massachusetts Body of Liberties (1641) and the subsequent Laws and Liberties of Massachusetts (1648), for instance, contained almost exact reproductions of biblical laws (the document “Moses His Judicials” cited in the book [pp. 21-22] was not a legal code). Additionally, Cotton Mather’s “Biblia Americana,” the first bible commentary in America, bespeaks a more profound influence of the Hebrew Bible than does his Magnalia Christi Americana (pp. 16-19).

Yet it would be misleading to focus solely on the Puritans’ interest in the “Hebrew Bible,” a conventional scholarly substitution for the Christian term “Old Testament.” The Puritans believed that the “New” Testament superseded the Old. While they still derived influence, inspiration, and laws from the latter, the Puritans did so through the lens of the former. They viewed Old Testament characters and rituals as typologies (symbols) of Jesus or Christian theology. Hence, while Massachusetts founder John Winthrop indeed “looked to Micah… as a model of a political community” (p. 21), he did so in a sermon tellingly titled “A Model of Christian Charity,” in which his famous phrase “city upon a hill” (p. 11) alluded to Matthew 5:14. Similarly, Mather’s Nehemias Americanus, which compares Winthrop to the biblical character Nehemiah, appeared in his Magnalia Christi Americana, literally “The Great Works of Christ in America” (16-17). Moreover, Puritan biblicism did not translate into acceptance of Jews in their midst; the few Jews who made their way into Puritan colonies faced an intolerant environment inhospitable for establishing a Jewish community, where they had to constantly ward off ministers’ efforts to convert them.[5]

A similar dynamic appears in Proclaim Liberty’s second section, on the revolutionary era. The American Revolution was exceedingly ripe with biblical material. The colonists cast the imperial conflict in biblical terms, drawing upon narratives, tropes, and characters from a variety of biblical stories, such as the exodus from Egypt and the conquest of Canaan, the kingless period of the various Israelite judges, and the corruption of Haman in the Persian royal court (p. 60). This phenomenon manifested in a wide variety of sources, including newspapers, literary texts, correspondence, and sermons. As in the previous section, some additional sources would have bolstered the book’s argument for the centrality of the Hebrew Bible in revolutionary America; Yale president Ezra Stiles’ correspondence with a visiting rabbi in Newport in the 1770s would be of greater interest and relevance to the reader than his The United States Elevated to Glory and Honor (pp. 128-136).

However, a wider selection of sermons might suggest that the New Testament played a similarly significant role in revolutionary biblicism. James Byrd’s book Sacred Scripture, Sacred War (2013) conducted a statistical analysis of thousands of scriptural citations in revolutionary-era sermons to determine the most influential biblical passages.[6] As Zachary Hutchins points out in a review essay, of the top eight results in Byrd’s research, half of them came from the New Testament.[7] While methodologically tenuous (a higher number of citations does not necessarily indicate a higher degree of influence), Byrd’s findings reveal a wider biblical imagination than Proclaim Liberty might acknowledge.

Additionally, Proclaim Liberty’s section on slavery and the Civil War, while it skillfully documents how both pro- and anti-slavery advocates drew upon the Hebrew Bible for arguments, elides Eran Shalev’s claim that the New Testament played a more significant role in this discourse, especially as the nineteenth century progressed.[8] Meanwhile, the subsection on African-American treatments of the Hebrew Bible (pp. 297-320) missed a wonderful opportunity to include the poetry of Phyllis Wheatley, whose work drew upon both the Old and New Testaments.[9]

Few would deny the importance of the Hebrew Bible in American history, especially after reading Proclaim Liberty. It is not immediately clear, however, how to evaluate that significance not only with regard to the New Testament but other competing influences. The editors themselves acknowledge that “the Hebrew Bible has played an integral role in the American past, alongside Roman republicanism, the English Common Law tradition, and the political doctrines of John Locke, Cato, and Montesquieu” (p. xxv). Moreover, not all citations were created equal; it is difficult to distinguish between genuine belief and rhetorical flourish, between influence and usage. Thus, while Proclaim Liberty lays crucial groundwork for further research on the American biblical tradition, it remains an open question how to evaluate that tradition and what that tradition means to different religious groups.

[1] A. J. Jacobs, The Year of Living Biblically: One Man’s Humble Quest to Follow the Bible as Literally as Possible (New York: Simon & Schuster, 2007).

[2] Perry Miller, “The Garden of Eden and the Deacon’s Meadow,” American Heritage 7.1 (December 1955). Available at: https://www.americanheritage.com/garden-eden-and-deacons-meadow.

[3] Eran Shalev, American Zion: The Old Testament as a Political Text from the Revolution to the Civil War (New Haven: Yale University Press, 2013).