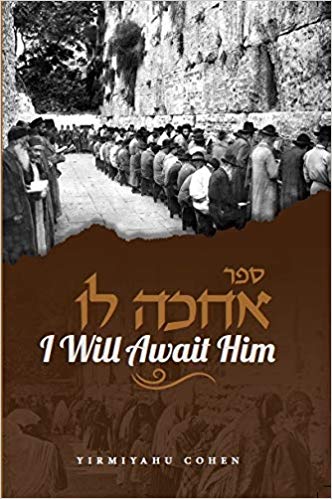 I Will Await Him by Yirmiyahu Cohen (Natruna Publishers, 2018) thoughtfully advocates a position anathema to many Lehrhaus readers: anti-Zionism. After arguing that the establishment of the State of Israel violates Halakhah,[1] Cohen goes on to claim that the State is illegitimate, and religious Jews should disassociate from it. My rebbeim do not think its founding transgresses Halakhah or at least are unconcerned with this question after the fact. Indeed, while most of us pay lip service to halakhic pluralism, it’s uncomfortable when our cherished notions are challenged. Yet I Will Await Him offers the Zionist reader an opportunity to hear the best arguments against Zionism. If the reader is not persuaded, probably nothing will change his or her mind.

Of course, anti-Zionism is not new in Orthodox circles, but this book’s character may surprise readers. I Will Await Him addresses a highly emotional topic in a civil tone.[2] Cohen politely (though strongly) disagrees with pro-Zionists. He is trying to be as even-keeled as a rabbi writing about kosher gelatin. Cohen even gives significant exposure to views contrary to his own. The author tackles dozens of pro-Zionist arguments, and analyzes the words of leading Zionist rabbis such as R. Yitzhak Herzog, R. Shlomo Zevin and, yibbadel le-hayyim, R. Shlomo Aviner. It’s fair to say Cohen knows more about religious Zionism than many of its supporters. He even discloses some positive statements of haredi leaders about the State of Israel.[3] In accounting for these “admissions,” Cohen told me that in our information age there are no secrets, and questions must be addressed head-on.

I Will Await Him, like much of the literature surrounding the halakhic permissibility of the State’s founding, focuses on the Three Oaths mentioned in Ketubot 111a. These Oaths adjure the Jewish people not to prematurely end the Exile by (1) rebelling against the nations and (2) ascending to Eretz Yisrael “like a wall.” The third Oath adjures the nations not to oppress Israel “too much.” It’s impossible to do justice to Cohen’s complex halakhic analysis in brief, but part of his argument is that the nations did not give the Land to the Jews. The British fled, the UN lacked jurisdiction and their Partition Plan was a recommendation that was never implemented, and the Arabs objected. Cohen also marshals sources which say that the Three Oaths forbid mass immigration even without creating a state.

The author also rejects the popular argument that the Oaths are no longer in effect because the gentiles did not keep the third Oath (not to oppress Israel too much). He argues that the Oath not to ascend Eretz Yisrael “like a wall” has independent validity,[4] earlier persecutions did not stop rishonim and aharonim from invoking the Oaths, and Maharal says it is forbidden to transgress the Oaths even under threat of torture.[5]

Cohen shows how an array of poskim, before and after 1948, viewed the Three Oaths as forbidding Zionism.[6] He uncovers a surprising statement of Rav Abraham Isaac Kook that affirms the Oaths and cautions the Zionist movement not to violate them.[7] Cohen reclaims three early heroes of religious Zionists – Maimonides, Nahmanides, and R. Yehuda Halevi – by arguing that these rishonim contradict political Zionism in principle.[8] The book includes scores of rishonim and pre-Zionist aharonim who mention the Oaths in commentary and responsa.[9]

Beyond his comprehensive and sometimes-unexpected citations, another major strength of the book is that its sources are illuminating regardless of ideology. One need not share the author’s conclusions regarding political Zionism to be moved, for example, by his rich exploration of the meaning and value of galut (exile). Galut provides national atonement, inspires converts, and offers opportunities to sanctify the entire world. It prepares us for the geulah (redemption) that follows. Its challenges compel us to show patient trust in Hashem. Our preservation shows His miraculous hand, as no other explanation accounts for our survival. Cohen’s analysis is a corrective for views of exile as simply a misfortune or, alternatively, as a place to feel comfortably at home.

Accordingly, Cohen’s book can enlighten those of us who live in exile. Numerous sources obligate us to respect malkhut and behave deferentially, as Yaakov did with Esav. We should exercise our rights as citizens of our home countries. At the same time, neither possession of an non-Israeli passport nor the State of Israel’s existence is a reason to be strident, disrespectful, or unpatriotic. We are in galut and must act accordingly.

Studying the Oaths can also help us understand contemporary Halakhah as it affects Israeli issues. R. Ovadiah Yosef[10] and, yibbadel le-hayyim, R. J. David Bleich[11] theoretically permit trading land for peace because the Oaths remove the obligation of conquest. Though R. Shaul Yisraeli disagrees,[12] it is interesting that poskim who accept the State on some level invoke the Oaths on a major national issue.[13]

Further, Cohen’s engagement with the writings of Religious Zionist pioneers enables the reader to view familiar personalities in a new light. It isn’t only Rav Kook who cautioned Zionists not to violate the Oaths. So did R. Yitzchak Yaakov Reines[14] (founder of Mizrahi) and R. Yissachar Shlomo Teichtal.[15] Cohen may well be mistaken to conclude that Rav Kook would have opposed a state in 1948. His research, however, corrects the misconception that the Oaths matter only to the Satmar Rav.[16]

Above all, the book’s value lies in its profound engagement with a Talmudic sugya. A halakhic conclusion is best appreciated in light of a contrary position. A study of opposing pesak yields recognition that even a correct maskana is still a hiddush. There is no reasonable way that Cohen’s thesis, shared by a roster of gedolim and buttressed by dozens of sources, can be blithely dismissed. Halakhic debate should be engaged in with honesty and without fear.

Why then, given the book’s considerable strengths, was I not convinced? Minority views are not necessarily wrong, but start from a default point of suspicion. Cohen represents a minority position even in the haredi world. Even among those who believe the Zionists violated the Oaths, most limit its contemporary relevance. Missing in this book is acknowledgment that it represents a minority view or any serious discussion of why most haredim differ. The reader may suspect, as I did, there must be more to the story.

What is more, while Cohen has reason to challenge a simplistic Zionist narrative that the British and the UN gave the Jews a state – the British withdrew and the UN was not a government – his argument is not airtight. Perhaps the British transferred authority to the UN, the latter becoming a legal extension of the British Mandate. Maybe the UN’s failure to enforce Partition isn’t tantamount to rescinding it. These possibilities, as well as others, are not explored in the book.

Additionally, one statement open to objection is the following: “…there was really no gadol at all who halakhically permitted the state” (p. 371). Zionist readers may object that R. Herzog and R. Zevin, among others, are gedolim. Cohen’s claim is also misleading. By “halakhically permitted,” Cohen means justifying the state in terms of the Three Oaths. R. Soloveitchik and R. Yechiel Yaakov Weinberg did not do this explicitly, but by writing positively about the State they implicitly do not view the Oaths as a problem. The same is true for a number of haredi leaders.

As the State of Israel is a fait accompli, the question of relevance may be Cohen’s biggest hurdle. He writes that due to the high haredi birth rate, “the day is not far off when we will indeed have a chance to vote on whether the state should exist or not” (p. 319). This may be true, but it’s likely they will vote affirmatively if they vote on the question at all. As the haredi population grows, they may need to play a larger role in running state institutions.

These shortcomings notwithstanding, Jews with Cohen’s views (numbering in the hundreds of thousands!) are part of kelal yisrael and Orthodox Judaism, and I gained from the author’s understanding of this ideological camp.[17] There is value in knowing what others believe and why. At the very least, realization that a pesak is legitimately based in Jewish sources removes suspicion of nefarious motives. Yirmiyahu Cohen is a Torah scholar who sincerely believes his position represents the truth of Judaism and is good for the Jewish people.[18]

I Will Await Him failed to persuade me to abandon the path of my rebbeim. I continue to trust great rabbinic leaders who do not take the path of the author. It succeeded in educating me in areas that are seldom written about. Let us continue to debate Zionism but knowledgeably and with derekh eretz, until mashiah can help us unravel the issue. I too will await him.

[1] Cohen’s focus is halakhic; the book takes no position on public protest, voting, or international relations. Likewise he avoids the usual anti-Zionist themes: the secularism of the Israeli government or the alleged mistreatment of Palestinians.

[2] Cohen is frank in his condemnation of Zionism. However, when addressing the writings of Zionist rabbis, he sticks to substance rather than personal attacks.

[4] Besides offering logical arguments, Cohen notes that zero sources pre-1948 link gentile behavior specifically with the obligation not to “ascend like a wall” or “force the end” with action.

[6] This includes the Rogatchover, the Rebbe Rashab of Lubavitch, the Hazon Ish, the Brisker Rav, R. Yosef Henkin, and the Steipler, among many others.  (Cohen notes that R. Henkin said the safety of the State must be ensured post facto).

[8] Maimonides warned Yemenite Jews to obey the Three Oaths even under persecution (end of Iggeret Teiman). Nahmanides writes that the Jews of the Babylonian Exile were forbidden from returning even with permission from Cyrus, had there not been Divine permission (Sefer Ha-Geulah, end of Sha’ar 1). Kuzari says if we would submit to the lowliness of exile for the sake of Hashem, we would merit mashiah (1:115).

[9] Notable is Rashbash, who explains Nahmanides’ position that yishuv Eretz Yisrael is a mitzvah as limited to individual settlement while the Oaths are in effect (Sheilot u-Teshuvot Rashbash, 2). This interpretation of Nahmanides is shared by others, complicating the thesis that Ramban was a forerunner of political Zionism.

[13] It follows that without the Oaths, land-for-peace is forbidden, and conquest is a hiyuv. An interesting question is whether conquest of Southern Lebanon is, if possible, now obligatory. A reliable source told me this was indeed R. Tzvi Yehuda Kook’s position (but not R. Yisraeli’s). Have those who confidently assert the Oaths are obsolete thought about these possible far-reaching consequences of their position?

[16] Cohen is also correct that “Zionist” is an inappropriate label for R. Tzvi Hirsch Kalischer and the Netziv, neither of whom spoke about a Jewish State, and advocated settlement only.

[17] This includes but certainly is not limited to Satmar.

[18] Cohen’s position is not to be confused with Neturei Karta, which joins hands with anti-Semites. There are red lines that Brisk and Satmar will not cross.