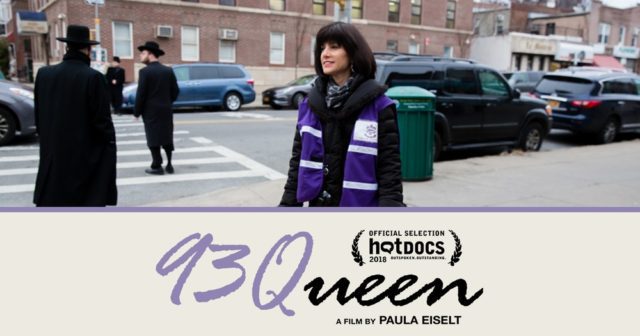 Judge Ruchie Freier, the founder of the first all-women’s Hasidic ambulance corps and the first Hasidic female judge, refuses to call herself a feminist. Yet after watching 93Queen, a documentary in which she stars, viewers will understand why others consistently try to pin that label on her. 93Queen tracks Freier’s struggle to create a reality in which Hasidic women who find themselves in medical emergencies can finally choose to have a female Emergency Medical Technician, rather than an EMT from the all-male Orthodox ambulance corps, Hatzolah. She and her group of female Hasidic volunteers are indefatigable in the face of every roadblock put in their path.

The film opens a window into the cloistered world of Borough Park, Brooklyn, and sheds light on the challenges faced by any kind of change to gender roles. The all-male Hasidic ambulance corps tries to thwart their launch, the rabbis won’t give them permission (a haskamah) for the project, and—worst of all—fellow women ostracize them because they find the idea of women breaking out of their traditional roles threatening to their way of life. But when the volunteers are interviewed on Chazaq radio, the host emphatically clarifies: “you shouldn’t think they are feminists. They are very, very far from that.”

Watching 93Queen—so called because the official call sign for Ezras Nashim, the female ambulance group, was “93-Queen”—I was fascinated, but I found myself disappointed in Freier’s disinclination to identify with the term that so clearly seems to define her. Throughout the film that charts the challenges and ultimate foundation of Ezras Nashim, the F-word is noticeably loaded.

Interestingly, the challenge Freier has talking about Feminism or equality is deeply connected to the challenges of Ezras Nashim portrayed in this film. The women who are part of the new ambulance corps are trying to straddle an incredibly fine line. The subjects do not want to be seen as doing something progressive; progressivism has negative connotations in their traditional world. These women would be horrified if someone put them in the same category as the pioneers who spearheaded the shift to women studying Gemara or the more recent exploding trend of Orthodox women becoming Yoatzot Halacha and even clergy. Despite their best efforts, however, the film is a testament to trailblazing women who break down barriers to enter a field dominated by men. The women who join the ambulance corps have mostly never been paramedics, nor have they challenged rabbinic authority. Yet they believe in their mission and are unabashed about their goals. As Freier says: “[the Rabbis] think women aren’t fast enough, strong enough, or smart enough…and I think we are.” Watching Freier and the heroic women of Ezras Nashim challenge the status quo in the Hasidic community makes their story a testament to female perseverance.

The film does a beautiful job of following the challenges the women face, with the camera focusing on physical movement as a metaphor for social movement. 93Queen opens with images of moving trains, school buses, cars, and eclectic groups of people using crosswalks. The scene highlights how the Hasidic community exists in the modern world: an island of unnatural rigidity in a sea of mobility. At one point in the film Ezras Nashim actually finds their car with a boot on it when someone tries to sabotage the group. Once Ezras Nashim actually does get off the ground Freier ironically sits in her car and says: “Okay, now let’s move.” The idea of movement within such a constricted community, both literally and figuratively, is what the film is about.

The director of 93Queen, Paula Eiselt, is one of the few Orthodox female filmmakers making movies today. Her background makes her uniquely positioned to find creative ways of forcing the viewer to think about different layers of issues around gender roles in the Hasidic community. The music in 93Queen, for example, is mesmerizing and clearly was chosen carefully. The singer, Perl Wolfe, is part of the band Bulletproof Stockings, an all-women Hasidic rock band formed in Crown Heights, New York. Wolfe is a vanguard herself, and like Freier, has found creative ways to expand the traditional range of careers open to Hasidic Jewish women within the bounds of Halakha. She has a hypnotic voice and engages in a form of liturgical scatting with klezmer-like music accompanying her. The verses Wolfe sings are strategically placed by Eiselt. This consideration is evident when a verse from the High Holiday services: “anu banekha, ve-atah avinu”—we are your sons and you are our father—is sung during a scene when the women are struggling in a man’s world, reminding the viewer that even the language of prayer excludes women. The irony is that none of the men in the film would even be allowed to hear Wolfe’s vocal solo because of the laws of kol ishah.

While the film highlights the importance of progress in finding new roles for Orthodox Jewish women, it also reminds us that often we move two steps forward only to move one step back. For example, Ezras Nashim is so worried about pleasing the rabbis that it will not allow single women to join its ambulance corps. In a fraught moment in the film a young girl with three years of EMT experience, which is more than almost all of the women in Ezras Nashim, is turned away because she is unmarried. At another point in the film, when Freier campaigns to be the first female Hasidic judge of city courts, she prints two separate fliers: one for women with pictures of her displayed, and one for men without her face, so that they can elect her without having to look her in the eyes. The final words on the soundtrack of the film are Perl Wolfe singing “eishes hayil,” the woman of valour, a song that glorifies the power of women, but mostly in the context of taking care of their husbands and households rather than as independent people.

Yet, this film does rightfully glorify these women’s devotion to their husbands, family, and God. One can’t help but be impressed watching the many shots of Freier braiding challahs and cooking for Shabbat while simultaneously stuffing envelopes for an Ezras Nashim fundraiser and taking emergency phone calls. When Ezras Nashim is at a low point, Freier’s gefilte fish is shown burning on the stove. Though the symbolism is not lost on the viewer, Freier is unfazed; she continues cooking and working, balancing it all. Later, in one of the most beautiful moments in the film, a group of Ezras Nashim volunteers pack into a van in the hopes that they will get a haskamah from an important rebbe (spoiler: he says no). Throughout the car ride there are close ups of the women poring over tehillim books with their iPhones as lights, reminding the viewers that for them this whole endeavor is about fulfilling the ancient word of God.

These shots of the women of Ezras Nashim, especially when highlighting the volunteers’ mundane daily life, were the most fascinating part of the film. The fluidity with which the women raise their children, cook, clean and dedicate themselves to being EMTs is inspiring—feminists or not. The movie is beautifully shot and Eisalt is an expert storyteller, keeping the viewers’ attention throughout the hour and a half film. The many great shots of buying challah, braiding challah, baking challah, and freezing challah alone make the movie worth it.

Some of the last sounds one is left with at the end of the film are from Wolfe’s bluesy rendition of “eishes hayil”—a song traditionally sung by a man to his wife—now being sung by a woman daring to sing her own praise. By the end of 93Queen, viewers are on board with Yitty Mandel, the Ezras Nashim coordinator: “There is nothing a man can do that a woman can’t do better.” Maybe this film is actually not a feminist film; I’m not sure if it is up to subject or the viewer to decide. But as Ruchie Freier says near the end of the movie to those trying to pin her down as a feminist: “You can’t narrow me down to a few specific words. It doesn’t work with me.” While I still believe she is a feminist, I would be hard-pressed to disagree with that.