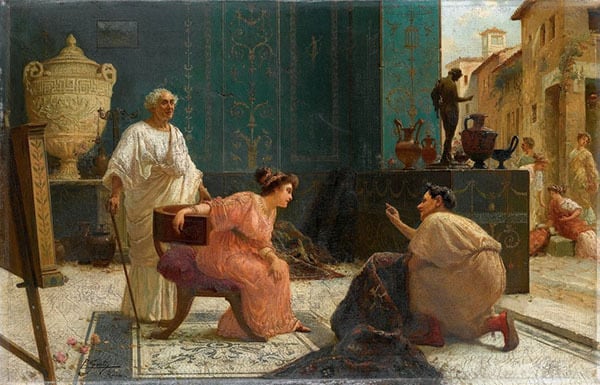 One important context to consider when reading a chapter of the Bible is the place of that chapter within the biblical book as a whole. It is especially important to practice this contextual reading with texts that have been incorporated into liturgy; such texts become so familiar that we rarely read them closely enough to produce fresh insights. Proverbs 31, sung in many Jewish homes on every Shabbat eve, is one such text.

Proverbs presents two female characters who could respectively be labeled the “heroine” and “villainess” of the book. Proverbs’ “heroine” is wisdom personified. Proverbs presents the pursuit of wisdom as the supreme good; accordingly, when Proverbs personifies wisdom as a woman, it affords her a status of premier prestige. Wisdom is imagined as an indispensable assistant to the Creator without whom earth would not be.[1]

Careful consideration of Proverbs 31 reveals, however, that its depiction of the woman of valor is in several instances at odds with the qualities ascribed to wisdom earlier in Proverbs. For example, the famous disavowal of physical beauty in Proverbs 31—“שקר החן והבל היופי”—contradicts earlier verses in Proverbs, such as Proverbs 11:16:

This is no forswearing of physical charm; quite the opposite. Here, then, is an important instance of discontinuity between chapter 31 and the rest of the book.

Another such instance relates to the attitudes towards wealth and trade expressed in chapter 31 and the attitudes conveyed in other parts of Proverbs. Proverbs 3:13-15 reads:

Her value in trade is better than silver, her yield, greater than gold;

She is more precious than rubies; all of your goods cannot equal her.

The description of the ideal wife in Proverbs 31 opens with a verse that is strongly evocative of those cited above:

What a rare find is a capable wife! Her worth is far beyond that of rubies.

Here too, the inestimable value of the ideal wife is presented in economic terms: “her worth is far beyond that of rubies.” Here too, then, we might expect this economic metaphor to be followed by an argument that the significance of material wealth pales in comparison to the virtue of a wise woman. We might expect the rest of the chapter to extol the woman of valor for her wisdom, devotion to God, and other admirable traits frequently praised throughout the rest of Proverbs. However, the rest of chapter 31 undermines a reading of ורחק מפנינים מכרה as purely metaphorical. In fact, in the rest of the chapter, the ideal wife is praised as a motor of economic production. Thus:

She looks for wool and flax, and sets her hand to them with a will. She is like a merchant fleet, bringing her food from afar. She rises while it is still night, and supplies provisions for her household, the daily fare for her maids. She sets her mind on an estate and acquires it, she plants a vineyard by her own labors … She tastes that her business thrives, her lamp never goes out at night.

This idealization of domestic industriousness is almost explicitly at odds with the description of wisdom in chapter 3. There, Wisdom’s value is greater than trade; in chapter 31, the wife’s value is that she engages in productive trade. Phrases from chapter 31 contrast acutely against earlier verses: טעמה כי טוב סחרה sounds very much like כי טוב סחרה מסחר כסף, but the thrust of one is the opposite of the other. While chapter 31 rapturously describes the woman’s mercantile endeavors, chapter 3 degrades trade as secondary to the utility of wisdom.

There are other inconsistencies between chapter 31 and the rest of Proverbs. The villainess of the book of Proverbs is the “foreign woman.”  Proverbs warns its readers to avoid the ruinous temptations of a non-Israelite seductress. Far better to avoid contact with foreigners and limit oneself to “drink water from your own cistern, running water from your own well” (Proverbs 5:15). Chapter 31’s woman of valor, however, is celebrated for her contact with foreigners: “She is like a merchant fleet, bringing her food from afar” (31:14). The valorous woman’s wealth is built on international trade. Moreover, “she makes cloth and sells it, and offers a girdle to the Caananite “ (31:24). This celebration of her business relations with non-Israelites is striking.

In fact, there are subtle hints that the women of valor mimics the behavior of a famous foreign woman. She is described as follows:

She sets her mind on an estate and acquires it, she plants a vineyard by her own labors.

This verse is highly reminiscent of Jezebel, the foreign wife of King Ahab. When Ahab failed to procure the vineyard of Naboth the Jezreelite, Jezebel planted false witnesses, who testified that Naboth had blasphemed God and the king, and had him executed on the basis of that testimony. Jezebel thus set her mind on a plot of land (זממה שדה)—a vineyard, to be precise (מפרי כפיה נטעה כרם)—and acquired it when her ineffectual husband could not (ותקחהו). Moreover, this verse is suggestive of the very mechanism by which Jezebel secured Naboth’s vineyard: the verb used to denote the woman of valor’s desire for land is “זממה”, which recalls phonetically עדים זוממים, or witnesses who conspire to condemn someone to death (see Deuteronomy 19:19).

All this may lead us to question the place of the woman of valor within the broader context of Proverbs. If the description of an ideal woman in this chapter is such a severe departure from central teachings that appear in the rest of Proverbs, what are we to make of chapter 31?

One possibility is that chapter 31 is a realist corrective to Proverbs’ idealism. “Yes, wisdom is fine and important,” we might read chapter 31 as saying, “but working and earning money make the world go ‘round.” Chapter 31 celebrates the clear-sighted woman who can see past the rather vacuous platitudes of pure wisdom, and is unafraid to busy herself with mundane, but utterly essential, matters of trade and business.

Alternatively, we might read chapter 31 through the lens of feminist critique. On this perspective, chapter 31 praises a woman who is willing to perform the tasks that are undesirable to men. Men, true seekers of wisdom, ought not engage in trade or contact with foreigners. The best woman is one who frees her husband from such unsavory activity.

Such a reading may find support in comparative study of Greek attitudes towards foreign trade. Proverbs’ unease with foreign trade is resonant with Greek suspicion of trade carried out with metal coinage. Leslie Kurke points out that both Herodotus and Aristotle evince an association between retail trade and deceit. Those who engage in retail trade are assumed to be untrustworthy and deceptive.[2] Aristotle writes:

For the expertise in business and the wealth that is according to nature is something different: this is expertise in household management, while the other is commercial expertise, which is productive of wealth not in every way but through trafficking in goods, and is held to be connected with money, since money is the medium and goal of exchange. And the wealth deriving from this sort of business expertise is indeed without limit (Arist. Pol. 1257b1-31, trans. C Lord 1984).[3]

Aristotle argues that the advent of money enabled a new type of business venture, the goal of which is the increase of wealth “without limit.” While the aim of household management is to maintain and sustain a household, the objective of money-based goods-exchange is the increased accretion of further wealth.

The woman of valor in Proverbs 31 goes beyond the requirements of sustaining a domicile. She is not only supportive of her home, but trades with foreigners, and amasses a fortune. Perhaps Proverbs pins this task on her, a woman, because accumulating wealth through trade is actually ignoble, and smacks of deception. Proverbs relieves men from assuming the burden of trade by shunting it onto the “ideal” woman.[4]

Today, some are resistant to singing Proverbs 31 on Friday nights because the text is thought to reinforce patriarchal norms which restrict women’s activities to the realm of domesticity. As we have seen, this is not quite correct; our chapter describes a woman engaged in international trade. Others argue that Proverbs 31 is a feminist text that deserves to be publicly proclaimed on a weekly basis. This may not be true, either; chapter 31 could be maliciously constructing the “ideal” woman as a figure on whom to deflect the deceitful associations of foreign trade. Proverbs 31 might very well promote women’s involvement in international trade in a way that seems ‘feminist’ to us, but it is inextricably bound up with the mistrust that a biblical audience could have associated with foreign trade.  Thus, however we read Proverbs 31, we should exercise caution about applying contemporary categories such as “feminist” or “misogynist” when assessing the text.

[3] I have taken this passage directly from Kurke, Coins 77.

[4] It may seem unlikely that the same mores can be found in Aristotle and Proverbs. Obviously, I am not claiming that the author of Proverbs 31 read Aristotle, only appealing to the possibility that similar ideas existed in both texts’ orbit. Furthermore, Al Wolters argues convincingly that the phrase צופיה הליכות ביתה is a play on the Greek word for wisdom: sophia. The author cleverly alludes to wisdom in his description of the woman of valor. See: Al Wolters, “Ṣôpiyyâ (Prov 31:27) as Hymnic Participle and Play on Sophia,” Journal of Biblical Literature 104 (1985), 577-587. If the author of Proverbs 31 had some familiarity with Greek, then it is more plausible that our chapter can be situated within a broader matrix of Greek cultural norms.