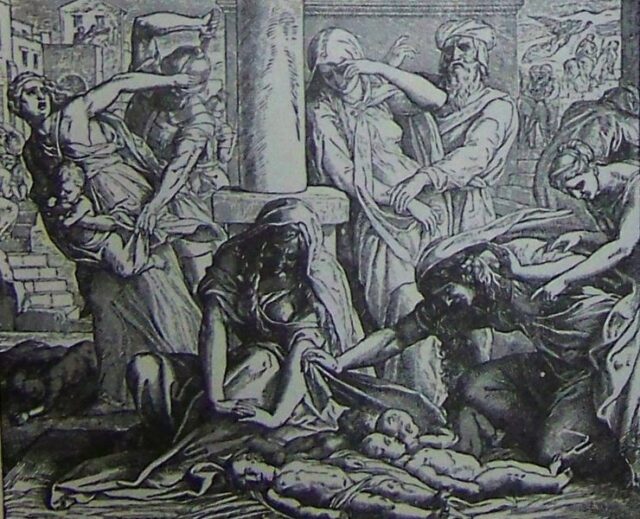 Our confrontation with tragic realities sometimes provides a new lens through which to view familiar categories. This year, our experience of the novel coronavirus offers us new insight into the Ten Plagues, which are central to the coming holiday of Passover. Above all, it is the most lethal of the Ten Plagues, the death of the Egyptian firstborns, that resonates most forcefully.

The assertion that makkat bekhorot is pivotal to Passover is straightforward enough. The Torah, in describing how a parent should respond to a child who inquires as to the meaning of the Passover rituals, makes the point plain: “And when your children ask you, ‘What do you mean by this rite?’ you shall say, ‘It is the Passover sacrifice to the Lord, because He passed over the houses of the Israelites in Egypt when He smote the Egyptians, but saved our houses’” (Exodus 12:26-7). Makkat bekhorot is, of course, the basis for the institution of the Korban Pesah, named after God’s decision to “skip over” the houses of the Jews who had spread the blood of the lambs on their doorposts. And the Pesah meal was, in 15 Nissan’s earliest iteration, the central event of what we have come to call the Seder night.

But when we examine makkat bekhorot more closely, a more subtle insight becomes evident: our commemoration is not so much about the death of the Egyptians’ firstborns, but about the sparing of the Jews’ firstborns. The parents’ first response to the son stresses that “[God] smote the Egyptians, but saved our houses.” And the obligation incumbent upon parents to designate their firstborns to God suggests that, by right, the children should belong to Him, for the Jewish firstborns owe their lives to God.

The same motif is manifest in the custom for firstborn children to fast on erev Pesah, which is particularly unusual given the general prohibition against fasting during the month of Nissan (Shulhan Arukh Orah Hayyim 429:2). As the Tur (Orah Hayyim 470) explains, “the firstborns fast on Passover eve… as a commemoration of the miracle in which they were saved from the Plague of the Firstborns.”

Ibn Ezra (Peirush ha-Katzar, Exodus 12:42 s.v. “leil shimurim”) takes this idea one step further, interpreting the concept of leil shimurim (lit. a night of watching), taken in the Haggadah to indicate that God provides special protection for the Jews on the Seder night, as revolving around the miracle of the saving of the firstborns. The verse reads: “That was for the Lord a night of vigil (leil shimurim) to bring them out of the land of Egypt; that same night is the Lord’s, one of vigil for all the children of Israel throughout the ages” (12:42). While the commentators offer numerous interpretations, Ibn Ezra understands the text to mean that the Jews observe the holiday of Pesah because God saved the Jewish firstborns. This remarkable reading suggests that the miracle of the firstborns was not only a seminal element in the Exodus, but the seminal event.

Yet all this begs the question: Why was the survival of the Jewish firstborns considered a distinct miracle? God had stricken the Egyptians with nine plagues, yet in no other instance does the Torah require unique rituals to commemorate the divine intervention. What makes the tenth plague different from the rest?[1]

Seeking to account for this enigma, the Gemara (Bava Kama 60a; see also Rosh Hashanah 11b) explains:

Rav Yosef taught: What is that which is written: “And none of you shall go out of the opening of his house until the morning” (Exodus 12:22)? Once permission is granted to the destroyer, it does not distinguish between the righteous and the wicked.

Not explained in the Gemara is why the Destroyer is granted such permission. It would appear that this permissibility is tied into the unnaturalness or incomprehensibility of the plague. Makkat bekhorot differed from the other plagues not only in its intensity and sudden onset, but because it was unnatural and therefore terrifyingly unpredictable. Everyday plagues don’t afflict just the firstborns, and the plague itself – at least in the case of the first nine plagues – is typically visible.  This, according to Netziv (Exodus 11:4 s.v. “ani”), is the significance of the notion that it was God Himself who went out among the Egyptians (Exodus 11:3): the invisible, unnatural Source of affliction struck terror in the hearts of Egyptians and Jews alike, requiring a miraculous intervention on the part of God for the Jews to survive.[2]

This terror and bewilderment are evident in our response to the mystifying appearance of plagues throughout Tanakh. The commentators struggle to explain why collecting a half-shekel helps to avoid a plague (Exodus 30:12). The Tabernacle possesses the quasi-mystical potency to cause a plague to befall the priest who enters (Numbers 8:19). And the people’s raw fear is evident in the episode in which Aharon intercedes at the final moment, utilizing the incense to save the Jewish people from a plague (Numbers 17:11-12). In all these cases, the source of the plague is ultimately God Himself: mystifying, terrifying, and utterly debilitating.

Makkat bekhorot’s uniqueness as such an invisible, indiscriminate, and psychologically debilitating plague sheds new light on Passover. We generally use the term “eser makkot” or “ten plagues” to refer to all ten as a whole. This certainly has a substantial basis in rabbinic texts, not least of which is the Haggadah. Yet this phraseology threatens to obscure some key points. First, we tend to underestimate the extent to which the tenth plague was radically different from the others. (The Rabbis make the point by stressing that it was God Himself who performed the plague.) Indeed, it is striking that while we refer to them as the Ten Plagues, the Torah itself uses the term “negef” almost exclusively in reference to makkat bekhorot, with the exception of single usage in regard to tzefardeia (Exodus 7:27; see also Joshua 24:5). Elsewhere in Tanakh, the noun negef is used regularly, if not exclusively, to denote a plague – what today we might call an epidemic – reinforcing the terminological evidence that the last plague differs qualitatively from its predecessors.

If it is so obvious that makkat bekhorot should be viewed as a plague, why do we tend to overlook this insight? For one, it’s not the major focus of the Seder as we know it. Having developed in the wake of the Temple’s Destruction and parallel to the evolution of Christianity, as well as throughout the Middle Ages, today’s Seder is far more focused on God’s role in saving us from human enemies, not plagues. For centuries, almost by design, we have downplayed the relevance of divine mercy in the face of epidemic to the Seder night.

Of course, modernity has only exacerbated this tendency. We have become far less accustomed to plagues, and have even traded in the term “plague” for “epidemic” and “pandemic,” reflecting our increased scientific understanding of the causes of disease.

But this year has changed all of that, perhaps irrevocably. We are experiencing a plague. Of course, we understand more of the science behind the current plague, but it remains invisible to the naked eye. Indeed, as we know, countless people throughout the world are afflicted despite showing no symptoms, capable of passing on the lethal virus to unknowing potential victims. Many of us are rightfully terrified, even as we do our part to stay safe and care for others. And so the relevance of plagues to Passover, for once, is not lost on us this year.

Yet the parallels also offer a glimmer of hope. On Passover, we celebrate the fact that God miraculously spared the Jewish firstborns from affliction, blocking the otherwise inevitable march of the Destroyer. May this Passover serve as a harbinger for a respite from the coronavirus plague that is ravaging our world – without discrimination – today.

[1] For variations on this question regarding the need for the Jews to paint their doorposts with blood, see Mekhilta de-Rabbi Yishmael Bo 12:13; and Abravanel, Exodus 12, question five.

[2] The majority of commentators, including Rashi (to 12:22), maintain that the Jews remained inside to avoid being affected by makkat bekhorot. Ramban (ibid.), however, explains that they remained inside in order to avoid being harmed by direct contact with God’s Presence, which was present during makkat bekhorot. In any case, the Jewish firstborns would have been harmed by the plague or its Source, and thus required a miracle to survive.