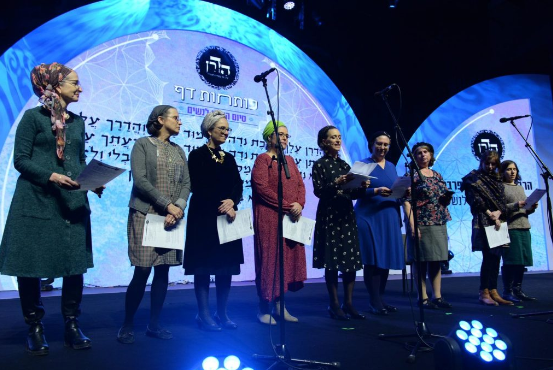 EDITORS’ NOTE: In the coming days, we look forward to featuring reflections on the recent Daf Yomi celebrations. First Elli Fischer looked back at 30 years of Daf Yomi celebrations. Second, Sara Tillinger Wolkenfeld offered a reflection on the role of imagination in bringing about the recent women’s Siyyum ha-Shas. Third, Zev Eleff offered a historical overview of the daf yomi revolution. Finally, Channa Lockshin Bob wonders: What do we want the next Women’s Siyum ha-Shas to look like?

It was the middle of July in 2014, and I was teaching Masekhet Avodah Zarah to girls in Drisha’s Summer High School program. As I often do, I invited the students to dramatize the case presented in the text: “Let’s act this out. The woman in the story has a jug of wine, and she leaves it with her non-Jewish neighbor for safekeeping.” But my students unexpectedly pushed back: “How do you know it was a she?” I shot back: “How do you know it wasn’t?” Confused, they retreated, but not without a fight: “Well, I learned Berakhot this year, and my teacher said it was about the boys,” muttered one girl.

Fast forward to the Women’s Siyum HaShas in Jerusalem this week, where Rabbanit Chana Godinger Dreyfus spoke about Seder Nezikin, and mentioned that these laws apply equally to men and women. This principle is one of the reasons that I chose Masekhet Avodah Zarah that summer. Nonetheless, as my students noticed, these sugyot are no more likely to explicitly include women. The stories are framed by male rabbis in the masculine. Women may be present implicitly, but they are not specifically mentioned. In that moment, my students, accustomed to seeing men everywhere they looked on the shelves of the beit midrash, saw only male protagonists. The possibility of inclusion exists, as Rabbanit Dreyfus explained, but isn’t always readily apparent to the uninitiated.

Rabbanit Michal Tikochinsky, one of my Gemara teachers and mentors, also spoke at the Women’s Siyum about our connection as women to the Torah and its scholars. She described her relationship to learning Torah by sharing a passage from Rav Soloveitchik’s u-Vikashtem mi-Sham. The Rav describes his experience of learning as one of intergenerational community. Everyone is present: “The Rambam is on my right, Rabeinu Tam on my left… everyone is sitting around my table… encouraging and strengthening me” (And From Their You Shall Seek, 145). Rav Soloveitchik feels a “personal connection” with each of these great Torah personalities. Rabbanit Tikochinsky described a similar experience of connection. When visiting cemeteries in Eastern Europe, she met “the whole hevra.” Rema, Maharshal, Tosafot Yom Tov – here were so many of the rabbinic personalities with whom she spends quality time, day after day. Her love of Torah runs so deep that it connects her across time to those whose conversations we echo and continue in our batei midrash.

Rabbanit Tikochinsky’s words resonate deeply with me. I love that passage from Rav Soloveitchik, and, for as long as I can remember, have felt that way about the rabbis of the Talmud. They have been my constant companions since I was a little girl, and they have been with me through thick and thin. They are opinionated, argumentative, and sometimes funny. We have spent a lot of time together. Yet, in a space dominated and convened by women, I found it striking that she could speak so unselfconsciously about her imagined world of companionship. The personalities she encountered through their headstones in European graveyards are all men. The dynamic tableau envisioned by Rav Soloveitchik is entirely male. No female scholar sat in the ageless, timeless beit midrash that the Rav conjures, and the rabbis to whom Rabbanit Tikochinsky feels so connected did not spend time with women like her. No matter how many of the halakhic issues debated by these scholars apply equally to women, halakhic history presents a vision of a male-dominated conversation.

Yet the process of studying Talmud – itself a story of the study and interpretation of earlier texts – calls upon us to read with imagination. Every Mishnah I teach my students contains a mikreh – a case, a story. It is up to us to think about what that story might be. Perhaps it is precisely this re-envisioning of all-male spaces that has enabled the flourishing landscape of women’s Torah study that exists today. Again and again, women who loved learning Torah envisioned themselves in the shakla ve-tarya, batei midrash, and all the stories. We looked at rooms that had no women, and imagined ourselves there. We looked at a world of serious Talmud study and fell in love, and that love helped us see ourselves in those spaces and in those conversations.

Rabbanit Esti Rosenberg spoke at the Siyum about this kind of love in paying tribute to her father and grandfather, Rav Lichtenstein zt”l and Rav Soloveitchik zt”l. They were instrumental in enabling women to learn Gemara, and they took these steps, in the words of Rabbanit Rosenberg, less because of what they thought about women, and more because of how they felt about learning Torah: “They could not imagine ovdei Hashem who didn’t learn Torah.” Indeed, a love of learning that animates avodat Hashem is precisely the basis of the connection that Rav Soloveitchik describes in u-Vikashtem mi-Sham.

Rabbanit Tikochinksy then shared an additional necessary element. Her internal world, in which she is in conversation with the great Torah personalities of the past, is only possible within the confines and context of the beit midrash. This space, writes Rav Soloveitchik, is not fantasy but a psychological reality. It is also, Rabbanit Tikochinsky added, a function of the love which fills in that which is missing in life, bringing joy. When those of us who love learning look at the world of Hazal and immerse ourselves in the words of the rishonim and aharonim, we see Torah scholars, lovers of Torah, first and foremost, and we see our own souls reflected in theirs. This ability to imagine ourselves sharing a beit midrash with others who have loved Torah just as we do is what enabled women to take their place in the contemporary beit midrash. Living in different centuries than Rabbanu Tam, Rambam, and Rav Hayyim (and indeed they lived in different centuries from each other) did not stop Rav Soloveitchik from inhabiting the same beit midrash with all of them simultaneously. So too Rabbanit Tikochinksy can relate to Rav Soloveitchik’s words and can be inspired by visiting the graves of great Torah scholars and not be inhibited by the fact that they were all men.

Again and again, the friends, students, colleagues, teachers, and mentors I saw at the Siyum said wonderingly: “Who would have thought? How could we have imagined?” But we did imagine. We imagined ourselves right into the world of learning. Every time we learned a text, every time we translated a story to include women, every time we envisioned ourselves in the company of the great rabbis of the halakhic discourse, we became a little more a part of that world. Slowly but surely, visions of a Torah conversation in which women were full participants gave way to a reality that looked more and more the way we always believed it could.

If we can look into the past with imagination, we can look forward as well. The challenges that lie ahead, like the challenges of the past, will surely be significant. May our love of Torah be the lens that continues to shape our vision of what is possible.