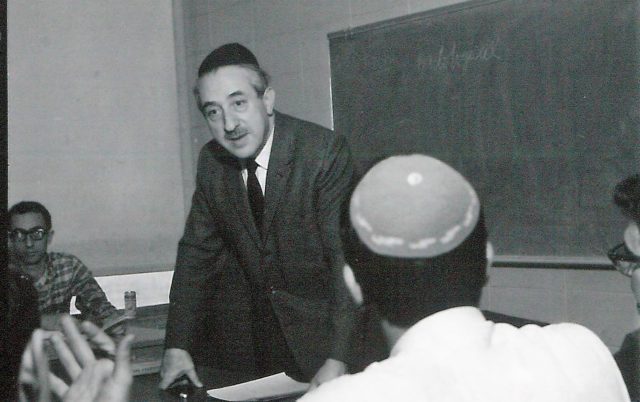 One late summer afternoon as I was walking through a Jewish neighborhood, my attention was caught by an interesting scene.

A number of people were sitting in two groups on the porch of a middle-class home.

One group was formed by a patriarchal figure of an old Jew. He was a man rich in years, obviously approaching the close of his earthly pilgrimage. His head was covered with the traditional “yarmulka” and his face, adorned with a long greying beard. He was sitting in an armchair deeply engrossed in what was undoubtedly a “sefer” from the traditional literature of Judaism.

At some little distance from the old man was sitting the other group. They were younger people, apparently of the same family—possibly children of the old Jew or, perhaps, his grandchildren. They were silent also but absorbed in the reading of newspapers that were scattered around and about them in almost numberless sheets.

The old man did not look like a complete group all by himself. Here were two worlds on that porch: the one of “Zaide” and the other of Zaide’s children; two worlds alike and side by side, but one could sense the gulf—unbridgeable—that separated the one from the other. There were a father and his children, so close to each other in space and yet so far removed from each other in communication.

There was a silence on the porch and somehow one realized that it meant: we have nothing to say to each other. However, there was something else too about that silence.

Silence could easily be made into a most rewarding subject of study. There are almost as many different kinds of silences as there are noises. There is, for example, the silence of an empty apartment. It “sounds” differently from the silence of an apartment that is a home, in which people live and which is silent because, after a day’s work and play, parents and children have retired and the house is at rest.

Two people may be silent because they have nothing to say to each other; but there may also be silence of an entirely different quality between two people who love each other—who do not speak because they understand each other without words.

There is a silence of anger, the “icy silence” and there is also a kindly and encouraging one that is a balm to the heart.

The two groups on the veranda were separated from each other even by nature of their silences. For the truth was—and it was probably the most striking feature of the scene which I happened to observe—that there were two different silences there: the one surrounding the father reading the “sefer,” the other around the children with their newspapers.

The silence about the old man had a dignity of its own; it meant thinking and contemplation, it had a fragrance like that of old wine. It was a most eloquent silence, for if one listened carefully one could hear it say: There is so much to think about, so much one ought to endeavor to understand. And it is good to sit and think and to ponder on what others before us, saints, prophets, and teachers thought and taught … and now and then to put the good book down for a while and to think our own thoughts and dream our own dreams, stimulated by the book.

The old man’s silence was saying all this and much more, but his children did not hear it. They were far away roving restlessly over endless sheets of black print. They were barricaded behind their own silence. And what a different silence it was. It revealed to the observer that the children had just finished their evening meal and it was too early yet either for their favorite TV program or for the show they were planning to see that night. What could one do at such a moment between work and entertainment? To converse? To think? Perhaps to read a book? About what? … The children’s silence spoke of boredom and mental exhaustion.

The newspapers that the younger group read were thrown away the next morning; the book in the hands of the old man was read and treasured by many generations in the past. The old man will put the book away for tomorrow and the next day and for the day after that. But one day “Zaide” will no longer be sitting on the porch. What will then happen to the book? Will there be only one silence left—the silence of irrelevance, grazing over the very latest nickel-wisdom of a soon-forgotten evening paper?