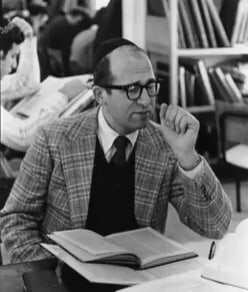 I read the article by Rabbi Zev Eleff, “What if Rav Aharon had Stayed? A Counter-History of Postwar Orthodox Judaism in the United States,” with great interest. Needless to say, my interest was not academic, as the question posed not a sociological challenge to me but an existential one. What if, indeed, we had stayed in the United States or—the flip side of that question—What if Rav Aharon had not come to Israel?

The question, on a personal level, was one that echoed Robert Frost’s poem, that my husband, Rav Aharon, was fond of quoting: “Two roads diverged in a wood, and I-/I took the one less traveled by,/And that has made all the difference.” Neither he nor I were “sorry I could not travel both” roads, as we saw our move as much more than what Rabbi Eleff describes as being motivated by Rav Aharon’s statement on “the importance of moving to Israel in order to form a viable spiritual community.” Indeed, is that why a religious Jew moves to Israel? One can have viable spiritual community in Teaneck or Los Angeles. Was our move a “Zionist dream” as Rabbi Eleff terms it, or something much more essential and basic? Eretz Yisrael was, for us, much more than a place to come for Yom Tov, to send our children for a year of two of study and to be laid to rest there. Eretz Yisrael, Torat Yisrael, and Am Yisrael were intertwined and essential to Rav Aharon’s being. But that is really not the gist of the article but rather an underlying assumption that I think bears relevance to its thesis. I will return to this point later.

Even though I personally see little merit in Monday morning quarterbacking or what Rabbi Eleff calls counter-history, I will try to willingly suspend disbelief and play the game with him. I do sometimes wonder: if we had not moved, would we have continued living in our “cozy quarters at 17 Fort George Hill.” Just to set the factual record straight our quarters were not cozy but crowded and we lived at 11 Fort George Hill, not 17. Our children, aged 5-9, were not “doting” grandchildren but had a doting grandfather. My father, the Rov, was 67 years old in 1970, in good health, and was not in need of the “care” or “generosity” of children. But none of this is of significance to the major thesis, only a personal response of mine when my life is described or interpreted by others. There is no need for me to agree with the interpretation, but the basic requirement of such speculation is that, at least, the factual account be accurate.

The major thrust of the counter history narrative is, to my understanding, not what would have happened if Rav Aharon had stayed at RIETS but what would have happened if Rabbi Emmanuel Rackman had become the president of Yeshiva University. I see three protagonists in the election of the president drama—Rabbi Soloveitchik, the board of trustees of Yeshiva University, and Rabbi Rackman. Rav Aharon appears in this drama as one “sated with his lot” and having no major role in the selection of the new president. As a result of what Rabbi Eleff describes as Rabbi Rackman’s “open branch of Modern Orthodox Judaism,” changes occurred within the institution that the Rov was too old to prevent. The major protagonist in this part of the saga is a forceful president moving the institution to the left and an aging Rosh Yeshiva unable to prevent this attrition. Rabbi Lander takes the limelight in the battle between right and left and Rabbis Hier and Riskin are the leaders of the west coast. And Rav Aharon—where is he? The situation troubled him and he utters some vague and unconvincing statements.

And so the saga continues. Institutional forces, time, and a “not so easily detectable sea change in Modern Orthodox life” come to front stage and Rabbi Lichtenstein becomes Rosh Yeshiva. And yet Rabbi Lichtenstein is described not as leading but as reacting to various social phenomena in his measured and careful manner and as encouraging elitism due to “his highbrow demeanor and high station.” And by the end of the narrative, he seems disappointed, ineffectual, and despairing.

What would have happened if Rav Aharon had stayed? As I read Rabbi Eleff’s fable, I thought to myself, thank God, he did not. He is described as being an ineffectual scholar who occasionally was able to moderate the angry factions of Modern Orthodoxy.

Superimposing a protagonist from one script to another has its great dangers. All the quotations that Rabbi Eleff was able to muster to buttress his case were statements of an outsider, for once Rav Aharon left the States he became, willy nilly, a deus ex machina that the embattled Orthodox rabbi turned to for help when he felt he needed a measured and authoritative Torah voice. Rabbi Eleff counterpoises the Rosh Yeshiva of Yeshivat Har Etzion on a “reality” wrought with institutional strife and tension that reflected ideological strife and struggle when all the latter has at his command are scattered utterances that he was able to glean from occasional propitious proclamations made by this Rosh Yeshiva. I would like to think that if Rav Aharon had lived in the States he would have raised his voice and taken strong stands on many issues that plagued and still plague the Orthodox community. In Israel, he addressed issues as varied as the excessive bombing of Beirut in the First Lebanon War, Sabra and Shatila, conscientious objection by soldiers, making a hero of someone who had murdered Moslems at prayer, relationships to secular Jews, how to understand Jewish history, and intellectual dishonesty, to name just a few of the failings he addressed in his sihot and in the written media. The world about him was subject to moral scrutiny based on clear Torah values. I have no reason to think he would have done otherwise in New York.

I would like to suggest that the flip side of Rabbi Eleff’s question—What if Rav Aharon had not come to Israel?—has relevance not only for the Religious Zionist community in Israel but also for the Orthodox community in the States. At that very gathering at the Jewish Center that Rabbi Eleff begins his presentation with, I presented a very different understanding of the implications of Rav Aharon’s move to Yeshivat Har Etzion for the American Torah community. I claimed then, and reiterate now, that Rav Aharon’s influence on the American Orthodox community, be it called Centrist or Modern, was because he had moved to Israel. He and his Yeshiva sought out and attracted the best and brightest of American young men—and, eventually, young women—to partake of his Torah at Yeshivat Har Etzion and at Migdal Oz. His students were not limited to those who might have chosen to study at Yeshiva University. He was not limited by the particular institutional structure of Yeshiva University, its dynamics and complexity. He distanced himself from the American scene as he immersed himself completely in the task of building an institution that had as its motto not Torah and Madda but Torah and army service. This combination of involvement in a Jewish polity while single-mindedly pursuing Torah learning and values had a far reach and attracted those who would later study in a variety of educational settings. These young people returned to their homes and it is they who saw Rav Aharon as their “gadol.” The very fact that Rabbi Eleff embarked on his counter-history journey affirms Rav Aharon’s broad influence.

And so: What if Rav Aharon had stayed? I repeat: Thank God he didn’t.