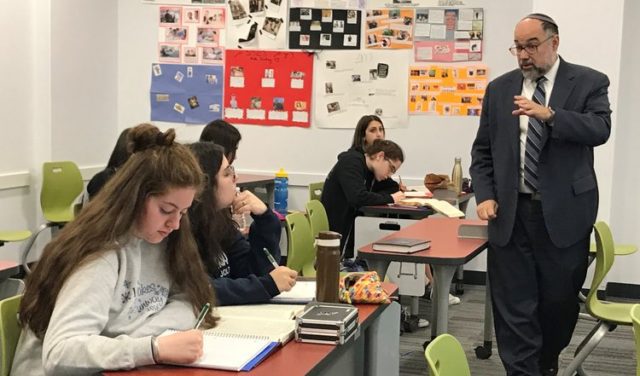 For nearly thirty years, I have taught a girls Talmud class at Ida Crown Jewish Academy in Chicago. As I would with a similar class of boys, when teaching this girls class, I strive to imbue my students with the skills and context of learning—and, most importantly, a love of learning. It was for this reason that for many years, I would invite Rabbi Gedalia Dov Schwartz, our Av Beit Din, to “faher” my class, to provide them the opportunity and joy of interacting with a “Gadol ba-Torah” through Torah study.

When first asked to teach this class, I was well aware of the Rav’s position and did not hesitate to accept the challenge. After all, it was my understanding that it is not a “hidush” to teach women Talmud. It was simply a natural outgrowth of what Sarah Schenirer had started in Krakow in 1918.

This understanding was reinforced about fifteen years ago by a response written by Rabbi Shlomo Fischer, the Rosh Ha-Yeshiva of Yeshivas Itri. At the time, I had approached a member of my faculty to teach a girls Talmud class. However, before he agreed, he asked if he could consult with his Rosh Ha-Yeshiva.

He did. In response, Rabbi Fischer wrote “just as the Hafetz Hayyim, z”l, already permitted them to learn ‘mikra’ [Torah], we act accordingly [in teaching women Talmud].” In addition, Rabbi Fischer urged this teacher to instruct the class at the highest of levels, with “pilpul,” and using the Ketzot Ha-Hoshen, the Kovetz Shi’urim, and other classic yeshiva texts.

Owing to this, I found Rabbi Saul Berman’s account of the significant involvement of Dr. Haym Soloveitchik in offering a Talmud program for women enlightening. The report of the meeting Rabbi Berman and others had with Rabbi Moshe Feinstein was also fascinating.

But even more, I was intrigued by Rabbi Shimon Schwab’s and Rabbi Yitzchok Hutner’s opposition to Talmud study for women. Of course, there are opponents to teaching women Talmud, and in the communities in which they function, I fully understand their hesitation and even opposition. What is interesting is that their antagonism toward women’s Talmud study was not merely based on the halakhic issue of Talmud study for women. It was also driven by another concern, the “slippery slope.”

These Orthodox leaders were genuinely concerned over where women’s Talmud might lead, not only the issue on its own. According to Rabbi Berman, the fear was that women’s Talmud study fell on a spectrum, one that could lead to the ordination of women, something the Rav unequivocally opposed.

The Modern Orthodox world has not plotted women’s Talmud study on a “religious” spectrum. For us, it is an educational issue. We encourage our men and women to study Judaic and general subjects at the highest of levels. How can we not, therefore, offer our women the opportunity to study Talmud?

Nonetheless, there is something very noteworthy. For while teaching Talmud to women is now commonplace in the Modern Orthodox community, the concern of the “slippery slope” is shared by many in our community as well. Even those who endorse the highest levels of Torah learning for women, as supported by the Rav, rue what some have chosen to take as the next “logical step” without the support of a broad-based halakhic leadership.

One can only imagine what the Rav might have said about some of the innovations that have taken place beyond the Beit Midrash. But within the Beit Midrash, we should celebrate the explosion of Torah learning for women which began on October 11, 1977.