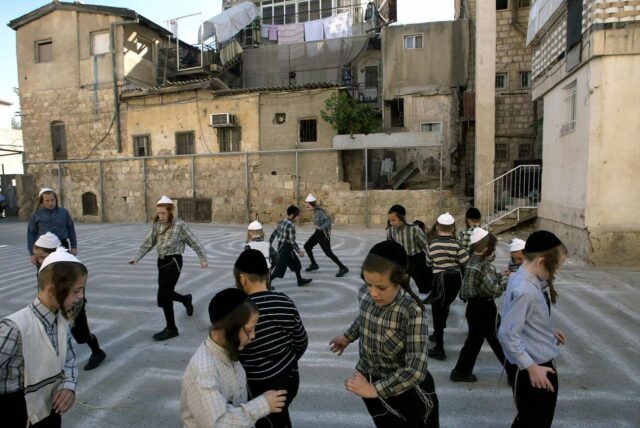 In his recent article in City Journal, Dr. Moshe Krakowski confidently claims that YAFFED, an activist group made up of former Hasidic school students, misrepresents the realities within Hasidic schools in New York.[1] Unfortunately, while Krakowski has done extensive research on the topic, the piece itself reads more as an apologetic, defending the Hasidic educational system from even moderate and legitimate criticism, while presenting ad hominem and unjustified attacks on activists working to modify the system in ways they deem both morally and pedagogically valuable.

Our intention in this piece is not to opine about the state’s oversight of educational services in Hasidic schools. However, we want to point out what we see as significant flaws in Krakowski’s argument.

None of these claims are convincing, and the evidence which the article offers for them is highly problematic.

Misunderstanding and Misrepresenting the Right to Freedom of Religion

Krakowski presents a stark binary choice between the total overhaul of the Hasidic school system and maintaining the status quo of almost complete autonomy for schools. He claims that the state’s attempts to clarify the minimal level of general education required of private schools and attempts to enforce that, “call into question the very idea of private education in the United States, as parents’ educational choices may no longer matter in the face of state mandates.”

This is an overstatement. Nobody has questioned the legality of private religious education, and there is no proposed legislation denying significant parental autonomy in school choice and curriculum. The only question is how much general education the state should require, and how it should enforce those requirements. Krakowski ignores the policy and administrative aspects of such legislation, and he does not consider the possibility that changes to the educational standards can be enacted in a culturally-sensitive manner.

The implication of Krakowski’s false dichotomy is that the state should be prohibited from regulating religious educational institutions in any way at all. Neither of us is a lawyer, but to the best of our understanding, contemporary interpretations of the First Amendment do not suggest such a thing, and substantial equivalency rules are considered constitutional throughout the United States.

The misunderstanding of the separation of religion and state connects to a more egregious misunderstanding of the connection between parental autonomy and child well-being. Krakowski argues that if depriving children of basic literacy in math and civics is a form of “child abuse… [w]hy, then, do parents pay thousands of dollars to send their children to these schools?” This is a non sequitur. Parental good intention and willingness to sacrifice for their children say nothing about the content of parental treatment. Physically violent punishment can be abusive even if well-intentioned parents do it for what they perceive as the good of their children. So too, an argument can be made that denying literacy to children, under some circumstances, could be a form of abuse. YAFFED is making this argument, and Krakowski has yet to disprove it.

Indeed, his comparison to the forced transfer of Native American children to secular (implicitly Protestant) boarding schools in the nineteenth century is weak. Nobody is proposing the forced transfer of Hasidic kids to public schools, boarding or otherwise. Indeed, within the limits of the law and the First Amendment, the government provides limited funds for transportation, some materials, special education, and administration of Hasidic private schools. Hasidic communities in the United States are thriving precisely because the American government permits freedom of religion and provides equal rights to religious citizens and secular ones. None of the current debates about Hasidic education in New York bear any comparison to forced attendance in secular boarding schools.

Misrepresenting the Quality of Secular Education in Hasidic Schools

Part of Krakowski’s defense of the Hasidic school system depends upon a series of poor arguments claiming that Hasidic education already provides young boys with all the education they need to function in the workplace. Krakowski does not present systematically collected data that can defend this claim. Instead, he uses skewed sampling, poorly collected qualitative data, and proxies.

Krakowski correctly points out that the study of Talmud, the mainstay of Haredi boys’ schools, includes a wide array of skills in literacy and higher-order thinking. But Krakowski does not bring evidence (nor are we familiar with any) that those skills transfer outside of religious studies to literacy and the skills necessary for the workplace, and the workplace is exactly the issue under discussion. The ability to unpack a Tosafot – a challenging task indeed – may or may not translate into the kinds of literacy and skills that enable individuals to support themselves. Moreover, Talmud is not steeped in the practical or theoretical framing of science or math studies, and at least minimal STEM training is absolutely necessary for future success in the workplace.

To counter the argument that Hasidim struggle in the workforce, Krakowski claims that they do not have diminished earning power, as compared to the broader New York population, due to their education. However, he does not consider Hasidim who are unemployed or underemployed, comparing only between Hasidim and non-Hasidim who have full-time, year-round employment.

Moreover, Krakowski cites evidence that Hasidim have good knowledge of science from the fact that they use medical technology. He rejects as “absurd” the claim that Hasidim possess an inadequate “knowledge of science.” After all, “Haredim are some of the most sophisticated consumers of medical treatment and expertise in the country.” Clearly, however, use of a product is not identical to understanding or appreciating the methods required to create that product. Hasidic education enables consumption of technology, but it is not designed to understand or produce technology. If we want to understand how much Hasidim know of or value science, we cannot use consumption of medical technology as a proxy.

Lastly, Krakowski does not engage with the widespread and compelling evidence that Haredi education often leaves young people without basic job skills or cultural literacy. Krakowski rejects as unreliable the testimony of former students, such as YAFFED’s executive director, who critique the current system. Even if their larger social and educational agenda is mistaken, there is no reason to doubt their lived experience struggling to integrate into the non-Hasidic workplace due to lack of basic skills. In fact, Hasidic schools and leaders are vocal about the diminished value of general education and their interest in minimal compliance, at best, with language and math education.

The Reliability of Experiences of Ex-Haredim and Their Nefarious Agenda

We both have met and spoken at length with Hasidim from English-speaking countries who struggle with basic English, some of whom were deeply frustrated by their inadequate elementary school education. Yet, rather than engage with these claims, Krakowski calls into question the reliability and agenda of ex-Hasidic educational activists: “Accepting the claims of ex-Hasidim regarding their former schools is like relying on a divorcé for information about his ex-wife.” This is a reductive comparison that, even if we were to accept, is clearly untrue. One can certainly learn a great deal about a person from an ex-spouse; one would be remiss to disregard any side of a complicated story.

Which leads us to significant questions about Dr. Krakowski’s research method. Krakowski is an educational researcher who uses qualitative methods and in-person observation to make sense out of the current reality in Haredi boys’ schools. But the blanket rejection of the perspective of a whole group of stakeholders in the community being studied is, to put it mildly, a violation of several basic elements of qualitative research. Phenomenologists, those who capture lived experience and interpret it, are methodologically prohibited from determining which players are “right” or “wrong” in a given cultural situation. Instead, they are tasked with offering a rich description of the varying perspectives and experiences of participants and stakeholders (including themselves) and how their position impacts their experience. A simple distinction between insiders and outsiders will not do.

After wholly rejecting the perspectives of ex-Hasidim, Krakowski goes on to accept the descriptions of those still within the Haredi school system not only as bearers of their own experiences, but as arbiters of the facts on the ground. These assumptions are problematic and serve to further marginalize an internal minority.

Krakowski’s division of actors into those he trusts to tell the truth and those he doesn’t ties into a series of oversimplifications and false dichotomies he sets up. The article speaks, for example, of the “complete absence of violent crime” in Hasidic communities. Hasidic communities may well be less violent than other communities – though crime data is notoriously skewed due to the discretionary nature of police work – but overstatements do not lead to clarity. Indeed, the recent riots in Borough Park, documented cases of violent “tznius patrols,” cases of spousal abuse, and sexual assault suggest that violent criminal behavior exists in the community.

Krakowski further insists that the low level of English in some Hasidic groups is “a matter of culture rather than education.” He uses this statement to suggest that the institutional school system is not a barrier to literacy; a family’s choices, however, might be. But this seems to undercut his whole argument, namely that state intervention in the educational system should be seen as an attempt to eliminate Haredism. If he thinks – wrongly to our minds – that education can be separated from culture, why be concerned with state intervention at all?

Finally, as part of an effort to reject the perspective of YAFFED, Krakowski points out what looks like an embarrassing error. In its extensive report, YAFFED calls into question the legality of the education in 39 schools, when it turns out, according to Krakowski, that only “28 actually exist.” In fact, Krakowski’s claim is incorrect. According to a letter by Interim New York State Commissioner of Education (Dec. 19, 2019), the city chose not to investigate eleven schools for various reasons – including schools that had closed or changed their profile between the YAFFED report and the city investigation, addresses linked to administrative offices rather than school buildings, or schools that include many students older than high school. These schools do (or did) exist.

As stated above, our intent is not to provide a definitive statement on the changes that need to be made within Hasidic schools. Those determinations should be made by all of the stakeholders involved. But we do know that the conversation about that topic deserves better than this. We encourage others to engage in more precise and rigorous research on the topic, and look forward to an extensive review of the findings.

[1] After completion of this article, City Journal edited the original piece, changing some of the content, presumably in response to criticism and social media debate. Editing the content of a controversial article during the controversy itself makes it extraordinarily difficult to have a transparent discussion. We critique the article that was available to us when we were writing, the point of reference for most readers. It is hard to debate a moving target.