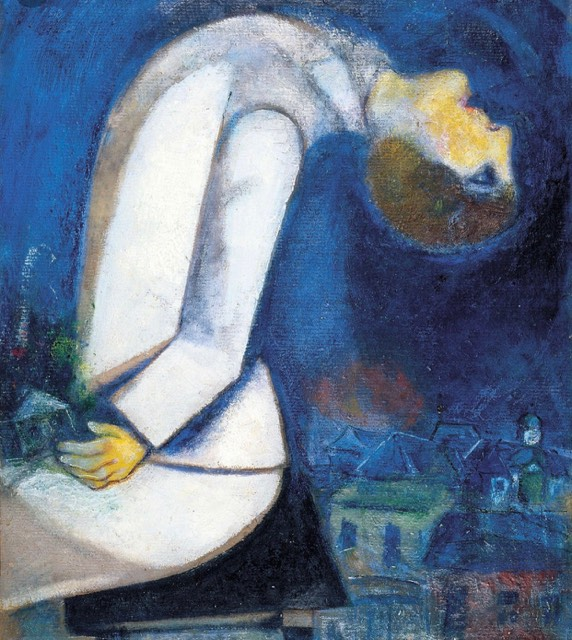 For R’ Hillel Zeitlin, May his merit protect us.

“On the day that Rabbi Shimon intended to leave the world, he was preparing himself (for the soul to ascend) and the havraya gathered into his house. Before him were Rabbi Elazar (his son) and Rabbi Abba (The scribe of the Zohar) and the rest of the friends, and so the house was full.”

“As the dew of Hermon which runs down on the mountains of Zion, for there the Lord commanded the blessing, life forever.”

“Rebbe Abba spoke: The holy luminary did not complete the word ‘life’ before his words became silent. I had hoped to write more but I did not hear more.”

The 33rd day of the Omer, known as the celebration of Lag ba-Omer, is a day marked by paradox. On the one hand, it is the day we commemorate the passing of R. Shimon bar Yohai, while on the other, it is the day on which we celebrate his life. Of the most sacred texts within the Zohar is the Idra Zuta, the small gathering wherein the companions of R. Shimon bar Yohai came together for the passing of their master. Aside from the secrets that were disclosed on that day, the narrative of the Idra Zuta teaches perhaps an ever deeper secret, facing death with a sense of fullness; as the Zohar recounts, “and so the house was full.” Fullness in the face of death. A sense of fulfillment and wholeness, as opposed to the privation and lack we so often associate with things passing away.

When confronting the darkness of death, the pain of departure, the typical response in our tradition is one of mournful remembrance. A time when those who remain are left to contemplate the absence that has taken place. Aside from the personal mourning for the particular soul which has departed its body, the confrontation with death awakens within the heart of those who remain the general questions of mortality, loss, pain and aimlessness. On Lag ba-Omer, however, we encounter an entirely new way of confronting loss, almost as if we are enjoined to celebrate the very reality of things passing away.

Now, it is not altogether difficult to claim that the celebratory mood of Lag ba-Omer is a response not to the death and absence of that which was present, but rather a recognition of sorts that looks upon what was given with eyes of gratitude, remembering the blessings of having that which is now gone. In this sense, the day is not a day of confronting the dark shadows of death, but rather a day on which the brightness of life is accentuated, a day on which we affirm the clarity of life over and above the confusion of death. The passing of R. Shimon bar Yohai and the end of death within the world of R. Akiva: both of these point to the victory of life over death, our ability to draw from within the depths of ourselves a hope that outlives the hopelessness of death.

But this approach does not quite capture the profound brightness that emerges from this day. The spiritual imperative of hoping beyond death is one that is present throughout the year. We recall the kaddish prayer wherein we acknowledge that death is not final, that death pushes towards the disclosure of deeper level of godly awareness. We encounter the rituals of shiva, the mournful path enlightened with the hope of a future point when those who are gone will once again return. We contemplate the promise of tehiyyat ha-metim — the resurrection of the dead — and the principle of faith that speaks of a future time when death will finally die. We pray for a time when death is swallowed up for eternity by that which is eternal. While all of these approaches speak to the eventual victory over death, there is an underlying assumption inherent within them: namely, that death is evil and life is good; death is dark and life is light. Within the battle between the binaries of life and death we hold on to the promise that life will overcome death thereby repressing the sting of death under the sweetness of life’s kiss. Death still maintains in its negative classification, death still brings to mind the vulnerabilities and uncertainties of being human, but the promise is that these painful reminders of our inevitable mortality will be defeated, subdued, held at bay by the overflowing power of life in all of its associations.

On Lag ba-Omer, however, we encounter the intimations of an entirely new path, one in which death is confronted and not repressed, where death is held in all of its heaviness only to reveal a deeper affirmation of life that emerges from within death itself. In the wake of R. Shimon bar Yohai’s departure, we do not simply hope towards a life beyond death, but rather we seek the residual lights of life within death itself. It is specifically in R. Shimon’s passing that we encounter the promise of life that resists the dark haze of death, the irreducible form of life that lives beyond its apparent end. It is precisely within the constriction of what appears to be the ending of all things that we catch a glimpse of new beginnings, not in spite of death but specifically through it. In contradistinction to the typical approach towards death, which attempts to subjugate death’s power underneath the power of life – referred to in the Zohar as “Itkafya” or subduing – on Lag ba-Omer we uncover a more profound method of living with death that forces death to offer us her blessings – referred to in the Zohar as “It’hafkha” or “transforming” (Zohar 2:128; Tanya, ch. 27).

For R. Shimon bar Yohai, a guiding halakhic concept in determining the laws of everyday life is our capacity as human beings to view the future that has not yet arrived, or the potential that has not yet been actualized, as being part and parcel of the present and actualized reality. For R. Shimon bar Yohai, the entirety of the spiritual quest is the hope, the possibility of disclosing the future within the present itself. Hermeneutically speaking, this is represented in the ability to capture the burgeoning potential that rests within the limits of actualization. That which has not-yet-arrived is seen as animating that which has already-taken-place, thereby endowing the constrictive limits of present reality with the expansiveness of the unlimited future. Whether it is the promise of a future memory that survives the reality of forgetfulness as expressed at the gathering of the Rabbis in Kerem be-Yavneh, or the ability to judge a legal case based on circumstances that have not taken place; the vision of R. Shimon bar Yohai is one that penetrates beyond the given reality, gazing towards the irreducible depths of potency that exist within everything (See R. Dovid Cohen, Kol ha-Nevuah, 1:147).

When looking at death from this perspective, death does not simply point to the inevitable end of things but also the promise of a new beginning. An opening that appears once all gates appear closed. Not only does death not point to the endings of things, it forces us to have faith in the possibility of beginnings that have not yet begun. When life is cut through with the awareness of death, the full acceptance of the limit of things, the moment is endowed with a sense of urgency, urgent and intense specifically because of its transient nature. When the present moment is seen through the lens of its inevitable end, the fallen nature of time is raised to the possibility of the now. Death does not take, but rather it gives, it gives the gift of possibility. If all we have is the present moment, then there is nothing that is not contained within the moment. All the dreams and hopes and fears and cries and laughs of the future are compressed into and within the moment at hand.

The gift of death is that it forces us into the present; it teaches us to love the present because there is nothing but the present. Only when we embrace the possibility of death can we truly uncover the potency of life in the moment. One only truly loves something when they acknowledge the very real possibility of being without that which they love. For R. Shimon bar Yohai, death does not mean absence, but rather the removal of some previous level for the sake of disclosing a higher level. On his deathbed, at his last moment, the word “hayyim” stood at the tip of his tongue (Zohar, Idra Zuta 296b). The word could not be fully uttered because it is only in death that life opens up. What stood as given and certain is now hazy, doubtful and because of that it remains full of infinite potential.

Returning to the beginning, we can now understand the opening of the Idra Zuta. It is specifically in death that R. Shimon bar Yohai was able to see the fullness of being. Only as his havraya gathered to say goodbye did R. Shimon behold the burgeoning future that would open once the book of his life was closed. On Lag ba-Omer we gaze into the possibilities that open upon the closing of some previous level. Disclosure, the hiding that reveals that which is hidden, the concealment that illuminates.

Hanukkah: A Poem by Avrom Liessen