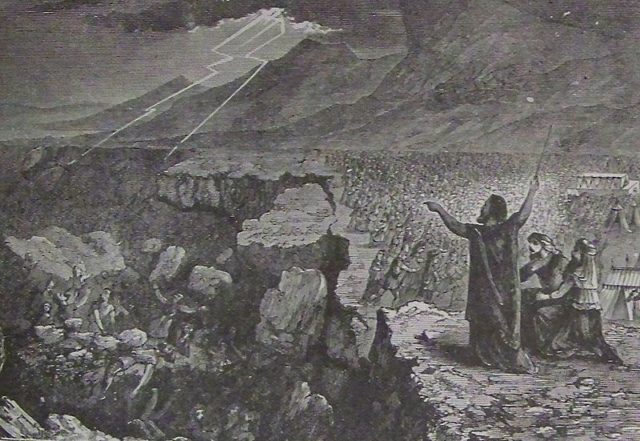 The insurgency of Korah and his followers against Moshe and Aharon is halted by the earth itself, which opens its mouth to devour the rebels. As remarkable as this physical phenomenon is, the Gemara in Sanhedrin 37b points out that this is neither the first nor the only place in the Torah where the earth opens its orifice.

Indeed, the first killing in history, Kayin’s murder of Hevel, also features the ground opening up. God informs Kayin (Genesis 4:11) that he will be cursed “by the [very] land that opened its mouth to accept the blood of your brother,” condemning him to a life of toil and wandering. As Rav Yehudah the son of Rav Hiyya puts it, the land opens its mouth “for good,” receiving Hevel’s unjustly spilt blood and softening its metaphorical screams (Genesis 4:10). The very earth that provided respite for Hevel could offer no rest for his murderous sibling.

The Gemara there asserts that “from the day the land opened its mouth and accepted the blood of Hevel, it never again opened.” But, asks the Gemara, what about the famous story of Korah, in which the earth opened wide to quash the rebellion? The Gemara concedes that, indeed, the earth opened again in the Korah episode. But the opening of the earth for Korah was “for bad,” serving as a punishment, while the opening for Hevel’s blood was “for good,” its purpose to bury Hevel’s blood.

It is no coincidence that, in this foundational underground narrative, the earth opened its mouth to both swallow Hevel’s blood and devour Korah’s body. Their very names attest to their association with the earth’s open mouth, indicating their destiny to be swallowed. Hevel means “open air,” and hevel peh refers to breath. Hevel’s blood, his very life force, was taken in by the earth, subsumed into its breath, the air of its mouth. (Incidentally, we know from Jewish law that hevel, or subterranean air such as that present in trenches, can be lethal; see Bava Kamma 51b; this is a continuing echo of Hevel’s death, preserved in nature.) Korah means “bald” or “empty”; the patch of land cleared away and replaced by the Earth’s mouth was a fitting place for Korah to call his permanent, desolate home.

The Gemara’s juxtaposition of the Kayin and Korah episodes is not accidental. These are the two cases where, in an extraordinary deviation from nature, the earth opens its mouth. The Gemara obviously didn’t “forget” about the Korah story, only to come up with the distinction that the Kayin-Hevel story was “for good” while the Korah story was “for bad.” The oft-repeated swallowing of Korah’s rebellion by the earth (Numbers 16:30,32, 26:10, Deuteronomy 11:6) would not have escaped Rav Yehudah’s attention. Rather, Rav Yehudah is drawing a connection between these two stories of men whose actions motivated that same reaction by the earth.

Kayin’s murder was the first purposeful destruction of a living human, and it was carried out by one sibling against another—the destruction of a family. Korah’s rebellion was the first effort to destroy the fledgling peoplehood of am yisrael, perpetrated by one member of the nation-family against his brethren—the destruction of a people. In a sense, Korah’s rebellion aimed at murder, an attempt on the life of the body politic, targeting the personified republic and everything it stood for. The Gemara therefore gestures at the parallel between the originary actions of each of these categories: the first murder and the first rebellion.

The actions of Kayin and Korah share more than the crime of “attempted murder.” Each aggressor experienced a certain confusion as to how best to carry out his destructive act. That same Gemara, and the same Amora, Rav Yehudah the son of Rav Hiyya, assert that “Kayin inflicted multiple wounds, multiple gashes, in his brother Hevel, because he did not know where the soul exits the body, until he reached his neck.”

Korah’s rebellion was similarly confused. The rebellion was not a single, focused campaign, but a disjointed coalition of malcontents rising together against the status quo. That’s why the leadership was so fractured, including not only Korah but also Datan and Aviram, as well as On ben Pelet and 250 leaders from across the Jewish people. Each faction needed its own opposition leader.

Their claims were also disparate: some factions decried the leadership of Moses and Aaron (Numbers 16:3), other groups believed they were going to die in the desert (Numbers 16:13), and still another group wanted priesthood for all Levites (Numbers 16:10). Was the purpose of the rebellion to usurp spiritual leadership from Moses and Aaron, or was it to improve the nation’s physical circumstances?

As Ibn Ezra (to Numbers 16:1) describes it, the rebellion comprised all of the above: an amalgamation of people upset about the ascendancy of Moshe and Aharon, the leadership of Kehat among the Levites, the replacement of Reuven with Yosef as the tribe with the rights of the bekhorah, and the replacement of the firstborn with the Levites. Different individuals upset about different things (including some mutually exclusive complaints) banded together to launch simultaneous attacks against different targets in their society. The disjointed nature of this rebellion might be why some interpretations of Avot 5:17, including Malbim to Numbers 16:1, see Korah and his followers as pitted against one another as well.

Both the first murder and the first rebellion, then, aimed to achieve their destructive goals through “death by a thousand cuts.” Lacking any precedent or “how to” guide for fomenting rebellion, both Kayin and Korah threw everything they could at their target, hoping their violent actions would find success. Thus, both the body of Hevel, and the body politic of Israel, were riven with cuts and divisions as a result of these primal attacks.

These attacks – one more successful than the other – constituted more than just a glitch or a divergence from normal functioning. They represented no less than a fundamental break in the natural order. By definition, murder and rebellion aim to destroy humanity and society, and the attendant trauma reverberates far beyond its immediate target. Such actions, when lacking necessary justification, tear at the very fabric of civil society and obliterate the harmony necessary for human flourishing. Not all violent actions have such negative consequences; in some cases, such as Pinhas’ zealous act against Zimri (appearing several chapters later in Numbers), an act of violence can be deployed in service of a greater restorative end. Kayin’s and Korah’s actions, however, had no such redeeming value.

So consequential were Kayin and Korah’s actions that the natural order itself rebelled. In each case, the earth ripped itself open, gaping its mouth as if in a primal scream. The foundations of the world could not continue their usual function amid such violent personal and communal rifts. That fissure in the ground – the opening of the earth’s “mouth” – represents that fracture and the thousand cuts that spurred it. These consequences of these violent acts extended far beyond the wildest dreams of their authors.

The destructive actions of Kayin and Korah, the founders of foment, shook the very foundations of the world. Both Kayin and Korah had their genealogical lines wiped out: Kayin’s descendants perished in the flood, and Korah’s progeny may well have been wiped out in the aftermath of his revolt (see Megillah 14a; but see I Chronicles 6).

We are enjoined “not to be like Korah and his congregation” (Numbers 17:5, Sanhedrin 110a), and instead to build a world of peace and stability. And, in doing so, we are charged to redeem the very earth that swallowed Kayin’s and Korah’s carnage, to restore a harmonious natural order.