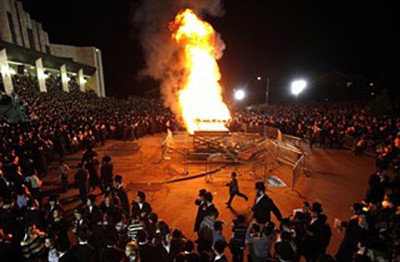 Editors’ Note: In honor of Lag Ba-omer, The Lehrhaus is pleased to present two complementary, but very different essays. In this article, Elli Fischer meditates upon the hilula of R. Shimon b. Yohai and the idea of celebrating the death of a revered rabbinic sage. In the complementary essay, Killing Off the Rav (So He May Live), William Kolbrener continues to explore some of the themes he addresses in his recent book on Rabbi Joseph B. Soloveitchik, The Last Rabbi

There is something jarring about celebrating the death of a major rabbinic figure. Typically, yahrtzeit observances are characterized by solemn rituals like fasting, reciting Kaddish, and Torah study in addition to prayer and visits to the grave of the deceased. Lest I be accused of Ashkenaz-centrism, consider that in Megilat Ta’anit, a late-Second Temple era list of minor holidays, the only deaths celebrated are those of Herod and Alexander Jannaeus, tyrants and despots remembered for their persecution of the Rabbis and their forebears.

The puzzlement is compounded by contrasting the contemporary observance of the hilula of Rabbi Shimon bar Yohai (Rashbi) on Lag Ba-omer with a far more obscure observance: the twenty-seventh of Sivan, a fast day that commemorates the martyrdom of Rabbi Hanina ben Teradyon.

Few  have heard of the Fast of Rabbi Hanina, and even fewer observe it. However, it appears in a ninth century CE list of minor fast days, many of which commemorate the deaths of the righteous, and is codified in Shulhan Arukh, whereas Rashbi is first identified with Lag Ba-omer in the seventeenth century, and it was not until the late-eighteenth century that it was identified as his hilula.[1]

Rabbi Hanina was an older contemporary of Rashbi. Both lived in the mid-second century CE, and both were sought and persecuted by the Romans in the aftermath of the fall of Betar. Yet, while Rashbi hid, Rabbi Hanina continued teaching Torah publicly, leading to his martyrdom. The famous Talmudic dictum that “women are weak-minded” is attributed to Rashbi, whereas Rabbi Hanina’s daughter, Beruriah, is one of very few female voices in Tannaitic literature. How is it that Lag Ba-omer, by now largely identified as Rashbi’s hilula, is celebrated by millions as an integral part of the Jewish calendar, while the Fast of Rabbi Hanina languishes in obscurity?

The purpose of this exercise is not to point out the inconsistencies and ironies of Jewish folk religion; there is no need to add fuel to that fire. Rather, “leave it to Israel: if they are not prophets, they are the sons of prophets.” Apparently, something about Rashbi and his death called for a celebration.

In the Talmud’s telling (Shabbat 33b-34a, Berakhot 35b, Avot 3:7, and elsewhere), Rashbi cannot make peace with the world he inhabits. He was extraordinarily demanding of himself, and could not tolerate any form of weakness in others. He could not even accept the most basic of human activities of plowing, planting, and gathering food for sustenance. He became an outlaw, hiding at the margins of society, barely tethered to this world, communicating with no one but his son and sole disciple—who, as fate would have it, became a law enforcer.

Paradoxically, Rashbi’s Torah only became accessible once it was detached from the living human being whose every word “stung like a scorpion and burned like a fiery coal.” Only then could he be stripped of his history, his politics, and his personality and placed into laconic dialogue with other Sages: “Rabbi Yehuda says … Rabbi Meir says … Rabbi Yose says … Rabbi Shimon says.” A thousand years later, Rashbi’s inability to communicate his teachings to his generation and his withdrawal from society were interpreted as evidence of his esoteric mastery. The Zohar, the key text of Jewish mysticism, was revealed and attributed to him.

Rashbi represents a phenomenon that applies to all great rabbis and to all great human beings. There is no denying the tragedy of a great person’s death, and there is no denying that the deceased is at risk of being cut down to size for popular consumption, as Rabbi Joseph B. Soloveitchik cautioned in his eulogy for Rabbi Hayim Ozer Grodzinski,[2] or of being “inter[red] in a Procrustean sarcophagus,” as Rabbi Aharon Lichtenstein warned with respect to Rabbi Soloveitchik. Yet Rabbi Hayim Ozer, Rabbi Soloveitchik, and Rabbi Lichtenstein were all interpreters of earlier sages, and none was particularly bothered by the possibility that their particular interpretation of a passage from, say, Rambam, does not comport with the interpretation that would have been given by the historical Rambam.[3] Rambam, the man, had to die and pass out of living memory before Rambam’s teaching could fully migrate from his corporal being to the corpus of Torah.

In death, Rambam, like Rashbi, was given new life. So it is with all of our great sages, who are called “alive” even in death.

[1] See this blog post by Eliezer Brodt and this lecture by Shnayer Leiman for a comprehensive history of the observance of Lag Ba-omer and its identification with Rashbi.