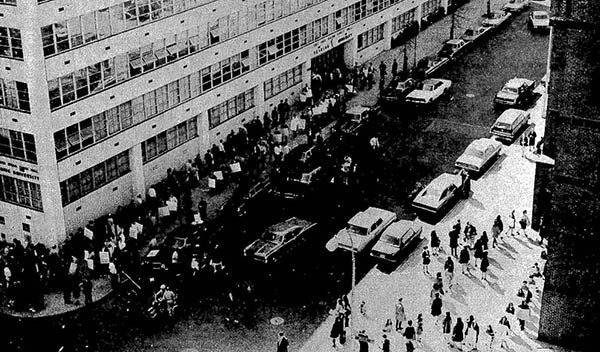 Dr. Tovah Lichtenstein raises several important points in her response to my first (and likely last) foray into alternate history. Before that, though, I want to apologize. For most of us, Rabbi Aharon Lichtenstein was a teacher and heroic symbol. That’s what has made the “What if Rav Aharon had Stayed” conversation so very interesting. Still, for others he was a husband, father and grandfather. Changing his life, retaining him for American Jewry, however fictitious, must have erased memories and milestones. I am sorry if the project appeared insensitive. It was certainly far from my intention.

Now to Dr. Lichtenstein’s comments: Rabbi Joseph B. Soloveitchik’s durability and health after his recovery from cancer and how to best explain the drive of so many thoughtful Orthodox Jews to go on aliyah—bearing in mind the Rav’s comments about the indifference to aliyah in the 1960s—are very worthy of consideration. As for the flipside: what if Rabbi Lichtenstein had not settled in Israel? My friend, Elli Fischer, has already helped fill that “gap” in the literature.

But Dr. Lichtenstein’s major criticism of my counter-history centers on Rabbi Lichtenstein’s “passive” role in my story. It appears to Dr. Lichtenstein that the major figure in the tale is “YU President Emanuel Rackman.” Of course, mine was a fiction, albeit with footnotes and some theory to back it all up. Nonetheless, I would instead suggest that the fates of the two leaders were linked by decisions rendered by both men. In truth, however, my crux of my article was about neither. The purpose was to show the importance in contingencies and choices in Jewish history.

The determinant of change was a very real possibility. President Samuel Belkin’s decision to separate the Rabbi Isaac Elchanan Theological Seminary from the rest of Yeshiva University provoked protests and picketing (pictured above). The Rav vigorously opposed Dr. Belkin and, sensing the need for support, might well have further urged his daughter and son-in-law to remain with him in New York.

Dr. Lichtenstein objects to my fable’s portrayal of her husband as “ineffectual”—or, as I would put it, “defensive.” In that myth published on Shushan Purim, Rabbi Lichtenstein very successfully helped his students and followers remain in touch with a Modern Orthodox vision and kept polarizing figures safely within the “big tent.” He was the hero. Yet, to Dr. Lichtenstein, the Rabbi Lichtenstein figure in this parallel universe hardly resembled the proactive rabbinic leader that he would become—in reality—in Israel.

Why did my story, almost unconsciously, unfold in this manner? I have two answers. One regards Rabbi Lichtenstein. The other reflects on me.

First, in the 1960s Rabbi Lichtenstein’s was the most prominent voice on behalf of religious moderation and moral heshbon ha-nefesh at Yeshiva University. For decades, Rabbi Lichtenstein’s “Consideration of Synthesis from a Torah Point of View”—published in 1961 and reprinted several times afterward—set a cautious tone for future conversations on the confrontation between Torah and western wisdom. In 1966, his open letter to Rabbi Yitz Greenberg all but defeated an unchecked liberal current at YU. He did this with reasoned nuance; not with the heavy hand that later Rabbi Greenberg opponents like Rabbi Ahron Soloveichik employed in the 1980s.

Another example comes to mind. In line with the Rav’s disapproval of it, Rabbi Lichtenstein’s staunch opposition to the Dean’s Reception stymied a type of coeducational mingling in Washington Heights and restored a certain yeshiva culture at the school. It also helped set Yeshiva apart from other college campuses in that period. Once again, Rabbi Lichtenstein’s words were measured and reserved—and in the context of his regular Talmud shiur, not as some grand pronouncement—in this episode.

In these cases, Rabbi Lichtenstein’s role was as someone who helped the Modern Orthodox community strike a balance, asking his coreligionists to take softer stands on a myriad of religious issues. Perhaps another question might be: how did aliyah and Israeli society change Rabbi Lichtenstein’s leadership approach?

The second explanation betokens the limitations and bias of a historian. Unlike other scholarly projects, I could not rely on facts and historical records to test my hypothesis and develop a thesis. The very “what if” question presupposes that I think Rabbi Lichtenstein’s presence would have changed things. I did my very best to consider a logical series of causal events and make use of other ancillary historical materials. However, there was no such data to anticipate Rabbi Lichtenstein’s reaction to all this—after all, in reality, he had moved to Israel.

I was uneasy about inventing dialogue and ideas—sources, as Dr. Lichtenstein calls them—for the Rabbi Lichtenstein figure in my fictional account. Perhaps I should have taken on this assignment with greater gusto and unhinged the story from all semblances of history. Like a teenager with a magical DeLorean, another wiser writer might have engineered a fictional Rabbi Lichtenstein to serve as a more proactive protagonist; to steer Modern Orthodoxy back on a fool-proof course.

Unfortunately, I don’t have all too many answers. Not yet, but maybe someday. In the meantime, I sent one of my heroes back in time to gain a fuller appreciation for contingencies and better perspective on moderation—to help me and some others get the most out of the choices that we make.