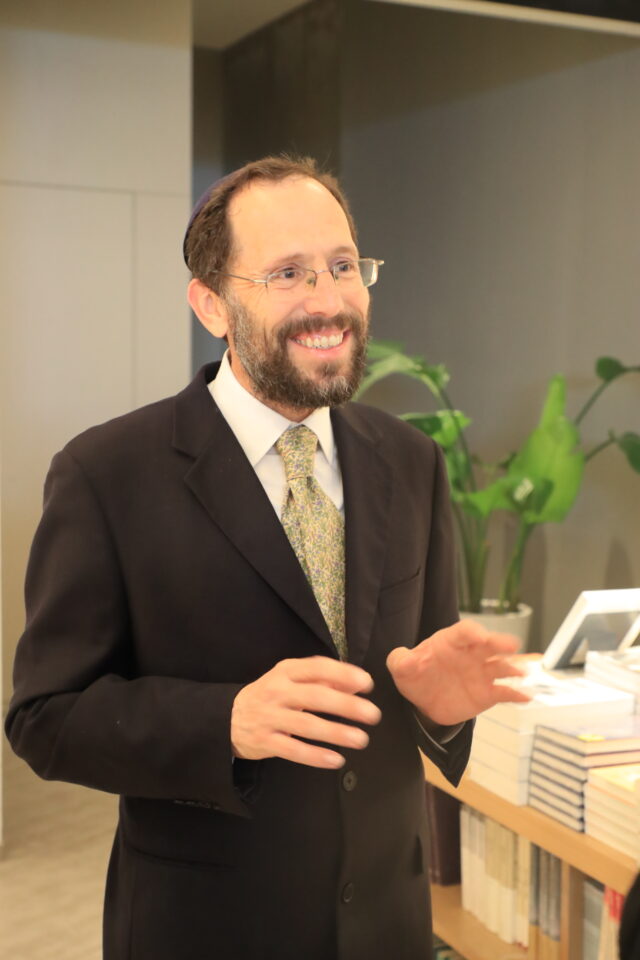 The state of relations between diasporic and Israeli Jews remains a ubiquitous topic of discussion in the Jewish public sphere. One small corner of this discourse – populated largely by adherents of the overlapping sub-groups “Modern Orthodoxy” and “Religious Zionism” – has devoted itself to considering the circulation of contemporary trends of “Jewish thought” (for lack of a better term) between the Anglophone and Israel. The first obstacle to be hurdled in this transfer of ideas and texts is, of course, language. Whatever one might think of the perils of monolingualism in both Israel and the English-speaking diaspora, translations are indispensable. On the Israeli side, more of the writings of mid-20th century American thinkers like Rabbi Joseph B. Soloveitchik and Abraham Joshua Heschel – not to mention works by contemporary authors like Rabbi Lord Jonathan Sacks and Arthur Green – have been translated into Hebrew over the last few years. On the other hand, American readers have lately been exposed to a more recent cohort of Israeli rabbis. Foremost among these are Rabbi Shimon Gershon Rosenberg (Shagar) and Rabbi Menahem Froman, who were part of the same Religious Zionist/settler communities. To oversimplify the story, beginning in the 1990s, members of this milieu who were discontented with mainstream Religious Zionist yeshiva curricula and praxis began to combine neo-Hasidism with an openness to general culture and philosophy. In the past decade, Shagar and Froman have become (counter)cultural heroes amongst a certain subset of American Jews. It seems fair to assume that most of these Americans were initially exposed to Shagar and Froman through time spent studying Torah or living in religious communities in Israel. However, recent years have brought some significant translations and a flurry of digital media devoted to these two. A collection of Shagar’s translated essays, Faith Shattered and Restored: Judaism in the Postmodern Age, published by Koren, provoked numerous responses (and responses to those responses). Suddenly, American Jews were engaging the concepts of “postmodernism” and “neo-Hasidism” and their role in contemporary Orthodoxy. Online platforms (such as Lehrhaus, Mosaic, Tablet, and the blog of Alan Brill) have run profiles of Shagar, and interviews with his students and interpreters. Froman has also been the topic of several articles, and his wry and playful aphorisms, published under the title Hasidim Tzohakim mi-Zeh, have even been publicized on Facebook in translation, and rumor has it that they will see print soon.

Shagar and Froman, while influential in their time (and, perhaps even more so, posthumously), were far from the only figures in what might be called the neo-Hasidic settler counterculture. By now, this milieu boasts well-established institutions like the high school Mekor Hayyim, and yeshivot hesder including Bat Ayin, Tekoa, Siah Yitzhak, Mahanayim, and Otniel – the latter of which was founded by Rav Benny Kalmanson and Rav Ami Olami hy”d, both early students of Shagar. Froman also taught at Otniel for several years, and remains influential there. The latest contribution to the recent spate of translations emerges from the beit midrash in Otniel: Rabbi Yakov Nagen’s Be, Become, Bless: Jewish Spirituality between East and West. The book’s origins are in parshah classes which Nagen taught at Otniel, which he then summarized as essays. These were published on the Otniel website and in other outlets, and received an initial translation by several of Nagen’s students; the text now published by Koren was newly translated. These essays first appeared as a Hebrew book in 2013: Le-Hitorer le-Yom Hadash: Kriyah Mithadeshet shel ha-Torah ve-haHayyim [Awakening to A New Day: A Renewed Reading of Torah and Life]. The English title (with its nod to Elizabeth Gilbert’s Eat, Pray, Love: One Woman’s Search for Everything Across Italy, India and Indonesia) references one of Nagen’s central teachings: the need to fuse “Being,” associated with the contemplative spirituality of the “East,” and “Doing,” associated with the activist materialism of the “West.” Nagen argues that Judaism should be positioned ideologically between the “East” and the “West”: geographically speaking, he implicitly locates Jewish spirituality firmly between Asia and Europe; i.e., in Israel. Yet with this new translation, his teachings are poised to appeal to students of Torah worldwide.

When I perused Nagen’s book after it was first published in Hebrew, I had the strange experience of reading teachings which I had for the most part already heard first hand. In no small part thanks to Nagen, I studied for a year after high school at Otniel. When I was in Otniel, the only classes taught in English were taught by Nagen: once weekly, we studied Mishnah in a home in the yishuv using the literary approaches he elaborated in another of his books, Nishmat ha-Mishnah, the “Soul of the Mishnah.” Most of my study with Nagen was in Hebrew. In his morning Talmud shiur, first studying Masekhet Sukkah (upon which he wrote his dissertation, published as Mayim, Beriyah, Hitgalut: Hag ha-Sukkot be-Mahshevet ha-Halakhah [Water, Creation, Revelation: The Holiday of Sukkot in Halakhic Thought]), and later Sanhedrin, he exposed us to manuscripts and their textual variations. We also gathered in his home on Friday nights after Shabbat dinner in the cafeteria, when he would give the classes on the weekly Torah portion which became Be, Become, Bless. His teachings stood on a solid foundation of rabbinic, kabbalistic, and Hasidic commentaries, and referenced, all in the same breath, Leo Tolstoy, the film Groundhog Day, and the Sikh founder Guru Nanak. Or take an essay published recently on Lehrhaus, which mentions (in order of appearance) the Zohar, Rashi, Rabbi Yehuda Leib Ashlag, David Ben Gurion, Douglas Adams, the Beit ha-Levi, Martin Buber, and Emmanuel Levinas. What takes Nagen’s book beyond mere eclecticism is his insistence on bringing these references down to earth. He understands Otnieli pedagogy to involve asking how we personally connect with texts; frequently, at the end of studying a Talmudic sugya, he would pose a question to his students: “where do we encounter this in our lives?” Be, Become, Bless is thus as much a handbook for a more spiritual life as it is a commentary on the Torah.

Fittingly, then, this is Nagen’s most personal book; it is studded with anecdotes, such as his visit with his children to the Egyptian wing of the Metropolitan Museum of Art, which provides a convenient commentary on the Exodus. In this vein, Nagen frequently quotes an aphorism of the novelist Paul Auster: “Stories happen to people who tell stories.” Nothing is random for a good storyteller. This principle also animates one of Nagen’s fundamental inspirations: the Zohar, with its tales of chance encounters and fantastic journeys. Nagen’s own journey from New York – where he grew up and studied, eventually receiving ordination from Yeshiva University – to the small town of Otniel, a yishuv in the South Hebron Hills, stands in the background. When he recounts stories of the tragically frequent terrorist attacks which have struck Otniel, it is impossible not to contemplate how far he has travelled from the comforts of Manhattan. Nagen is invested in interfaith dialogue and peace work, largely inspired by his close relationship with Froman, whose efforts to promote Israeli-Palestinian reconciliation are well known. These days, Nagen references Islam as much – if not more – than, say, Buddhism; he travels to Egypt and Jordan, is friends with Palestinian Arabs and Bedouins, and takes part in interfaith peace initiatives around Israel. This aspect of his activity brings me back to one of Nagen’s core audiences: young Jews who attended seminaries or yeshivot in Israel before studying on college campuses which frequently feature vocally anti-Zionist student groups and professors. Most of these students continue to identify as Zionists, but I suspect that many are also more ambivalent than before they encountered campus discourse. Of course, political tensions notwithstanding, these same campuses also have diverse and vibrant Jewish communities; American Jews are relatively secure and safe – certainly when compared to either Israelis or Palestinians. The appeal of Nagen’s position may be as a religious discourse that offers an alternative to AIPAC, progressive (post-)Zionism, or radical Palestinian solidarity. That said, the discourse of political correctness is quite absent from the book. Nagen believes that a major source of the conflict is religion, and therefore religion must be part of any future solution. His approach is less politically ambitious than that of Froman, who went so far as to meet with Hamas leaders; rather, Nagen practices and preaches a more grassroots “spiritual” diplomacy.

Froman is said to have once quipped that “The real cultural divide is not between the religious and the secular, but between the bourgeois and the bohemian.” Like Froman, Nagen’s counterculturalism in his Religious Zionist context is not limited to his political stance. He often speaks about his trips to India and Nepal, as well as to hippie festivals in Israel such as the Rainbow Gatherings and Boombamela. Indeed, Nagen has a longstanding relationship with New Age circles; at times his tone resembles Eckhart Tolle more than Soloveitchik. He grapples with the religious implications of the unabated interest in alternative spirituality and in travel to India and elsewhere, which are common among Religious Zionist youth. To speak anecdotally, many (if not most) of my peers in Otniel travelled to India or Thailand; of these, most spent chunks of time studying yoga or meditation. On the other hand, Nagen’s world is indebted to the popular culture of his American youth. His core secular text is The Little Prince, and he is also happy to discuss The Beatles and The Lord of the Rings trilogy. Thus, Nagen’s work is both deeply American in its references and deeply Israeli in the issues it faces.

On a “tremp” I took with him some years ago, Nagen opined that “the world needs a kabbalistic Rabbi Jonathan Sacks.” I understood this to mean that he aspired to combine the Lord’s literary style and intellectual liberality with the cosmic mythos and eros of the Zohar and Sefer Yetzirah. He is, in a sense, a properly neo-kabbalistic inheritor of “left-Kookian” universalism, who revels in the unity revealed in multiplicity. This stance helps explain why many non-Jews have become interested in Nagen’s teachings, such as those who sponsored his trip to China, and who translated his essays to Mandarin. Nagen’s musings on the place of Judaism and Israel in the global 21st century fully acknowledge that Jews are always in relation with many groups and cultures. From the perspective of intra-Jewish relations, I wonder if the “East” and “West” of the English title may also connote Israel and North America. Unlike Shagar and Froman, whose texts must overcome not only the language barrier but real cultural divides, Nagen’s voice speaks to both American Jewry, consumed by loss of meaning and political infighting, and to his fellow Israelis, themselves often torn between utopianism and despair. His ability to bridge these gaps stems from his talent at finding affinities between unexpected texts, people, and places; one can only hope that he finds his own readers, near and far.