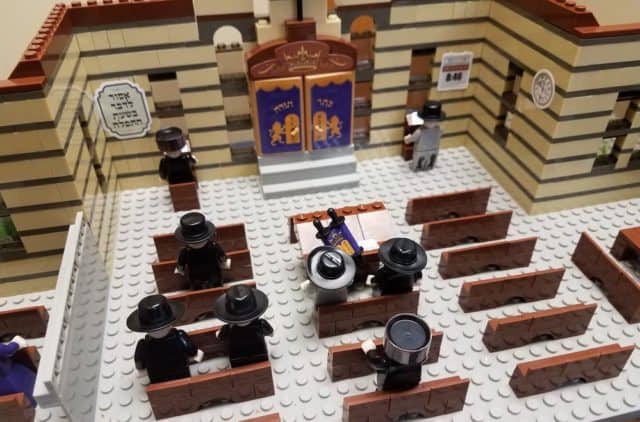 Five years ago, Shmuel Lipschitz opened his Wise Buys toy store in Brooklyn’s Williamsburg neighborhood. The young entrepreneur aimed to corner the market on “kosher” children’s playthings. The shop is idiosyncratic, to say the least. The so-called Ultra-Orthodox enclave to which Wise Buys caters does not watch television, plug into video games or play with Barbie dolls and most action figures. Instead, these Orthodox children and their parents come to Lipschitz’s store for toys that, as Laura Liebman put it, “reinforce rather than undermine their religious traditions and values.”

But it’s more than that. The growing kosher toy industry represents a clever material synthesis of American leisurely pastimes and Orthodox icons. This righteous amalgam is a rare specimen among the Modern Orthodox, a group that tends to use words like “synthesize” and “harmonize” when it comes to ideological matters, but not material products. Their children covet the standard kids’ fare and look elsewhere for their Torah inspiration. In contrast, the Orthodox Right abjure philosophical fusion but feel right at home when material gifts from the “outside” world can be put to wholesome and holy use. 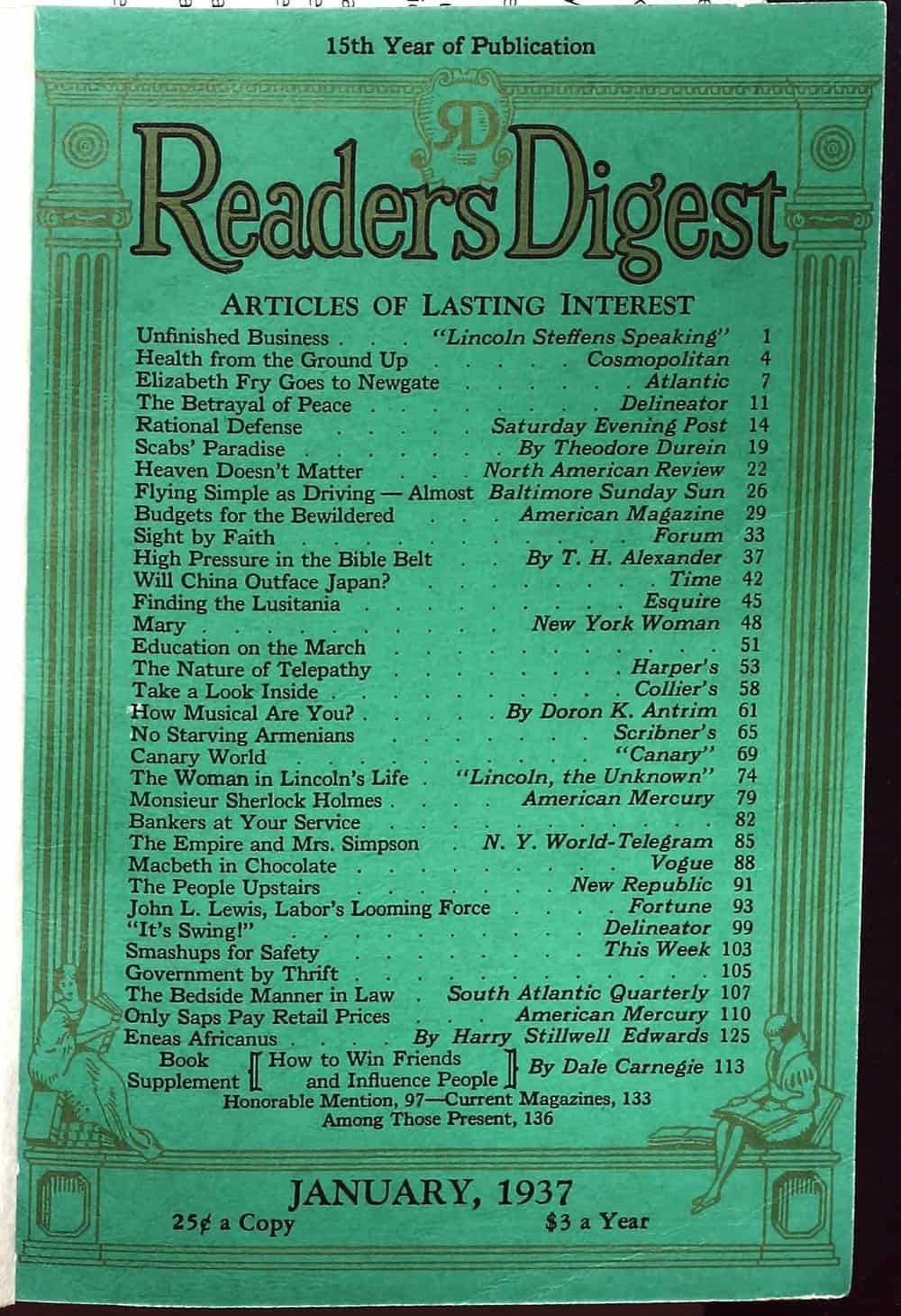 In that spirit, many within the Orthodox Right have embraced music, video, and digital media, so long as they can avoid the “filth.” It is what supposedly entitled Rabbi Eliyahu Dessler when he plucked the contents of a Reader’s Digest summary of self-improvement guru Dale Carnegie’s best-selling books and transformed it into a shmooze delivered in the Ponevezh Yeshiva in September 1950. The same for toys. With modern-day trappings and wrappings, kosher toys reinforce a way of life that is just as compelling as any alternative lifestyle. For youngsters, this is powerful messaging, one that normalizes and familiarizes a particular Orthodox culture at a very young age.

The Market for Kosher Toys
Lipschitz must have realized he was on to something. In 2014, his business was booming, much to do with the fact that half of the local Jewish population was under 18-years-old. The Hebrew Free Loan Society awarded Lipschitz $25,000 to expand Wise Buys, giving the entrepreneur ample room to show off his wares.

His business plan was not exactly original. In 1994, Barbara Shine founded Double Play Toys in Boro Park. Her store targeted a similar clientele. Back then, Shine had to sift through catalogues to identify values-appropriate merchandise. True, there were items like “rabbi cards” and an impressive number of English ArtScroll and Yiddish-language children’s books. But not much in the ways of full-fledged toys. So, customers entered Double Play Toys knowing that the store’s proprietor had already done much of the work sorting out non-prudish toys.

Today, this isn’t much of a problem. Wise Buys and Double Play Toys are filled with “synthesized” merchandise produced by Orthodox Jews in Brooklyn, Lakewood, and overseas in Israel. The industry is fueled by affluence, Orthodox triumphalism, and, most importantly, an intensified pressure among the Orthodox Right to remove foreign influences. Consider a recent letter written by a Bais Yaakov principal to his parent body that warned of the “latest Disney movies and fads that seem harmless but really do seep into your daughter’s mind and soul.” Here are some of the highlights:

When we met for the first time, I expressed to you my distaste for television. I explained to you what I think a “yiddeshe shtub” should look like. Not having a television in your home was #1 on the list. Meaning, that the “ikar’” in this home should not revolve around sports and TV shows. I was very clear when I said, “these are not the types of families that I am looking for. There are other schools where it is not such a big deal.”

I rarely asked, “Do you have a television?” because most parents at that point of the conversation would gladly tell me, “We do not have a television.” In addition, I would rather not become a school that makes parents sign a paper, stating that there is no television in the house. Why? Because I want to trust all of you … What I did not ask you then, was whether or not your children watch TV shows and movies on your home computer, an iPad or any other electronic device. I hoped that watching television or movies on these devices would be the same “toeivah,” “abomination,” as watching on a real TV. I meant that seriously. We are so immune to women and men who are worse than immodest in our surroundings that we do not even flinch anymore.

How can you live a Torah life, if pritzus and awful visualizations permeate your home and are seared into the hearts and minds of our children? The answer is, one cannot!

Hence, the market for Disney-less toys. The most popular toys are not the most creative. They deliberately draw from the typical proven-and-perfected toys found in toy chests and closets. “Deal Spiel” is a knockoff of Monopoly. “Mitzvah Kinder” look a lot like Fisher-Price’s Little People, but with hasidic-looking folk.

Perhaps the most innovative is the Lego-like Binyan Blocks. There’s a “Shabbos Table” scene, and another inside a sukkah. Instead of a Batmobile, Death Star, or Turtle Van, Binyan Blocks has Chaverim, Hatzolah, and Shomrim rescue vehicles. The most elaborate Binyan Blocks sets are the “Boys Yeshiva” and “Large Shul.” My children and I spent a recent weekend constructing the synagogue, an out-of-the-box birthday gift from my parents. 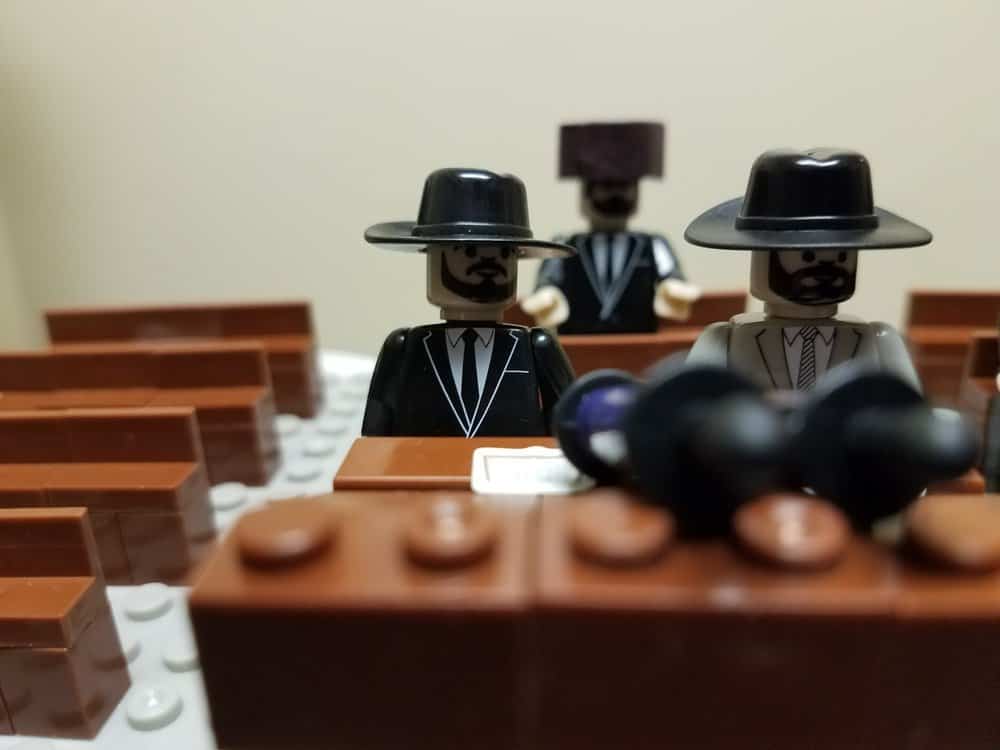 Binyan Blocks and the Construction of Ultra-Orthodox Judaism
Binyan Blocks was the brainchild of a moment. Rabbi Eli Wolf and his young son sat down to build a shul out of Lego. “After a couple of hours,” recalled the Lakewood-trained father, “the shul s completed, but of course the people did not look like real shul people. There was no Torah and there were many other things that just did not look right.” Wolf recruited a cousin and his friend—a “chasidsher yungerman” and a “heimishe yid”—with finance and manufacturing experience to help him along his quest. The triumvirate hailed from three distinct cohorts of the Ultra-Orthodox community, prepared to market a toy that might appeal and unite each of their respective social sections. 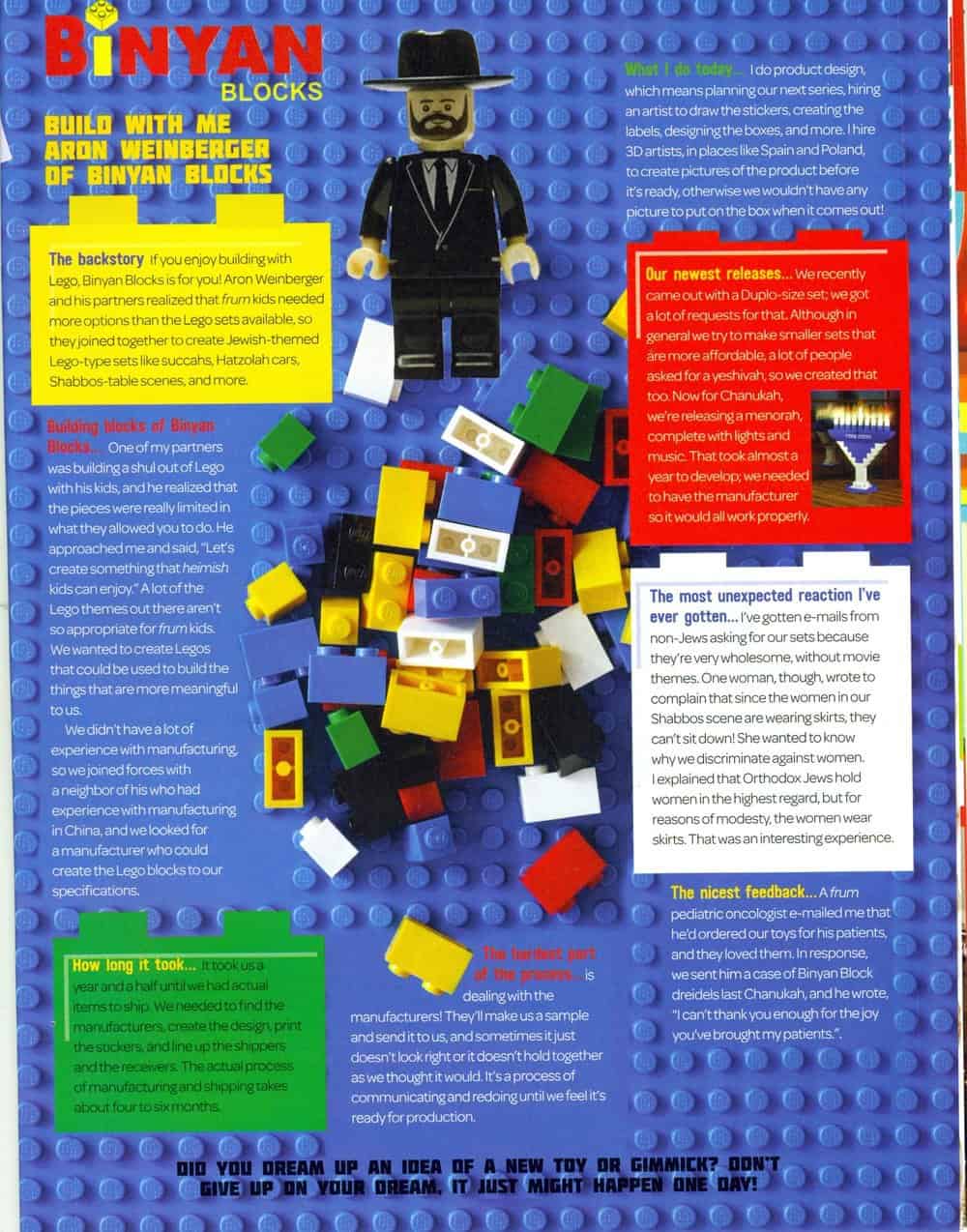 It was also apparent that the Orthodox Right would prefer a more Orthodox substitute for Legos. “A lot of the Lego themes out there aren’t so appropriate for frum kids,” explained Aron Weinberger—Wolf’s cousin—in a 2016 interview with Mishpacha. “We wanted to create Legos that could be used to build the things that are more meaningful to us.” On the whole, the feedback has been positive for Binyan Blocks: “I’ve gotten e-mails,” explained Weinberger, “from non-Jews asking for our sets because they’re very wholesome, without movie themes.” 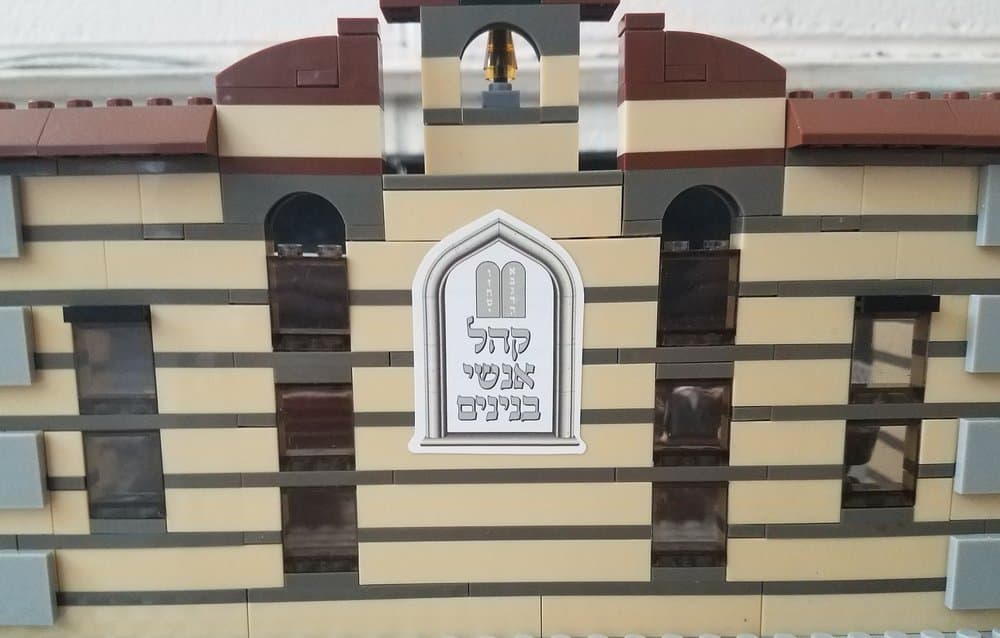 The planning and manufacturing took more than a year. Finally, in 2014, Binyan Blocks released several small sets and, most impressive of all, a “Large Shul” known to its plastic prayer-goers as “Kahal Anshei Binyanim.”

The understated two-toned synagogue is fashioned in the mold of a basic wooden Agudah shul. The main portion of the sanctuary is flanked by a limited-seating woman’s section on the left and a cozy beis medrish on the right. On the walls hang posters reminding worshipers that it is forbidden to talk during services and the latest times to commence prayers; both very familiar notices. The open-and-close ark is elegant but simple. 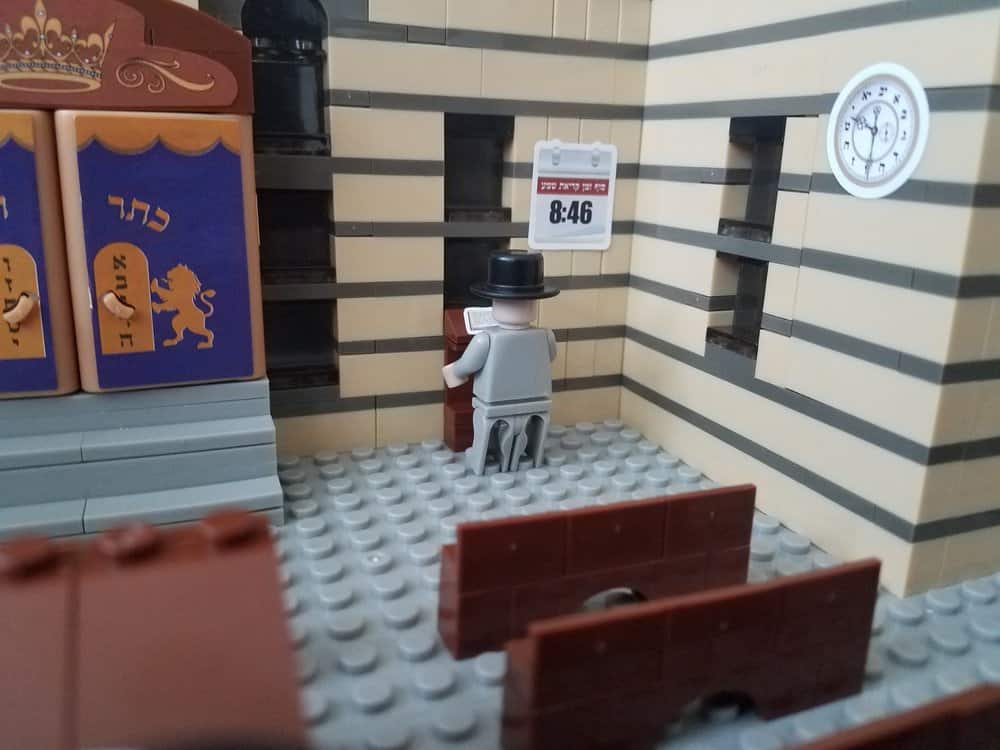 The best sort of branding are the figurines, ten in all. Eight behatted gentlemen, representing the spectrum of the Orthodox Right: from yekkes, to yeshivish to hasidic. Two bewigged women dressed in long dresses. To be sure, the female attire—or at least the quirky repercussions—irked at least one customer. Here’s Weinberg: 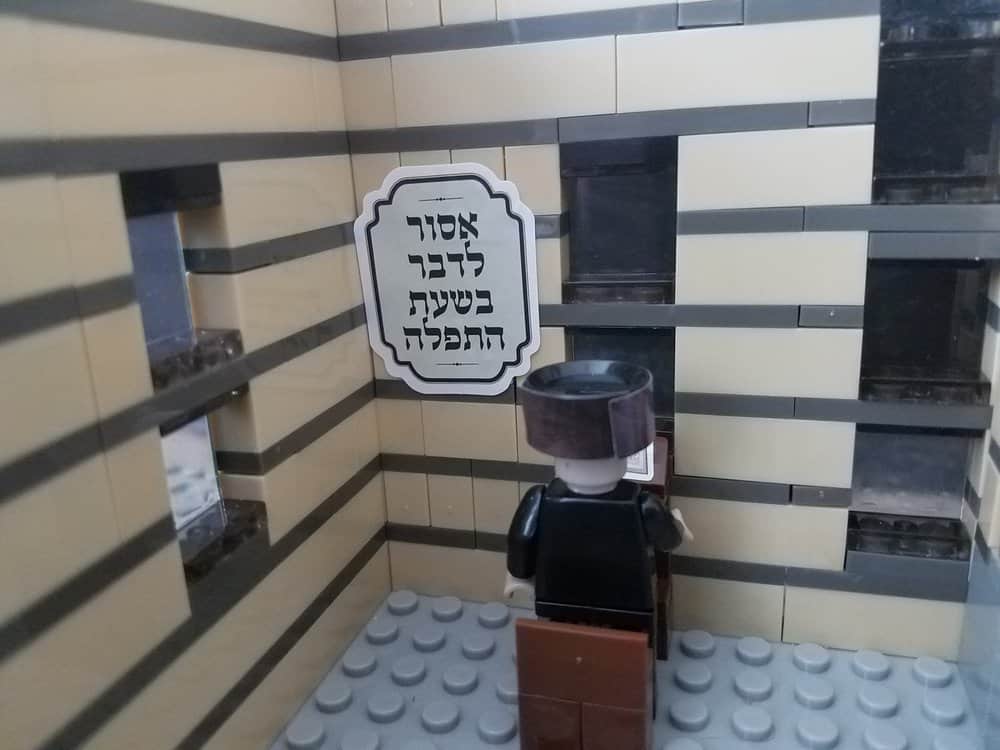 One woman, though, wrote to complain that since the women in our Shabbos scene are wearing skirts, they can’t sit down! She wanted to know why we discriminate against women. I explained that Orthodox Jews hold women in the highest regard, but for reasons of modesty, the women wear skirts. 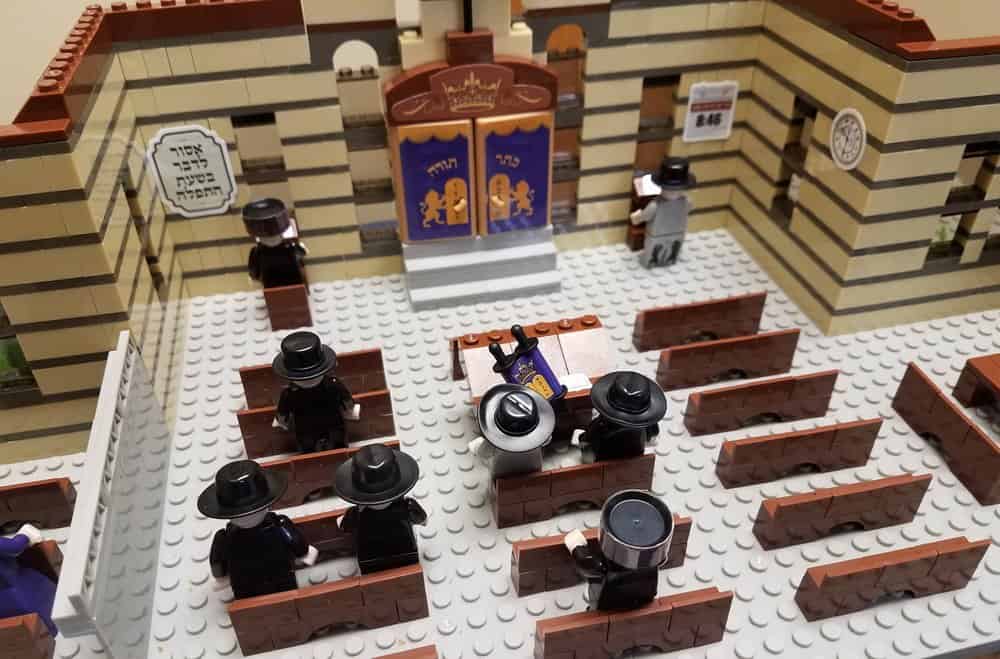 Most insiders, however, are far from perturbed. To the contrary, the shiny Jewishly-oriented bricks confirm to young people that their religious practices are normative, stylish even. The generic Binyan Blocks characters resemble real-life people who pass by them on the streets, perhaps they look more than a little like their own parents and other family members. In all, Binyan Blocks and the rest of the kosher toy industry legitimates for young “insiders” a lifestyle that beyond the neighborhood is an American cultural aberration.

Not so for the outsider. Upon completion, our Large Shul emerged as a conversation piece for my four-year-old daughter and me. “Why is the women’s side so small?” she asked. She was quick to fire off a few more trenchant questions: “Why do all of the boys have beards?” “Why does one of them have to sit up in the front?” and “Which books should we put into the bookcase?”

I answered them all, age-appropriately. Meital and I compared the Binyan Blocks congregation to the Modern Orthodox varieties that she was accustomed to in Boston, Chicago, and a number of others she has visited in the Tri-State and Los Angeles areas. We discussed how a large women’s section made her feel, even if it was seldom full, and how colorfulness was a religious virtue of hers.

After that, Meital recommended that next time we should construct a shul “like ours.” I smiled, then explained that we would have to make one ourselves. Lego does not market a Young Israel-edition, nor are any Modern Orthodox entrepreneurs gearing up to produce iconic Modern Orthodox scenes. Most Modern Orthodox children would prefer to build with Lego, especially the new-fangled kinds resembling the “latest Disney movies and fads.” 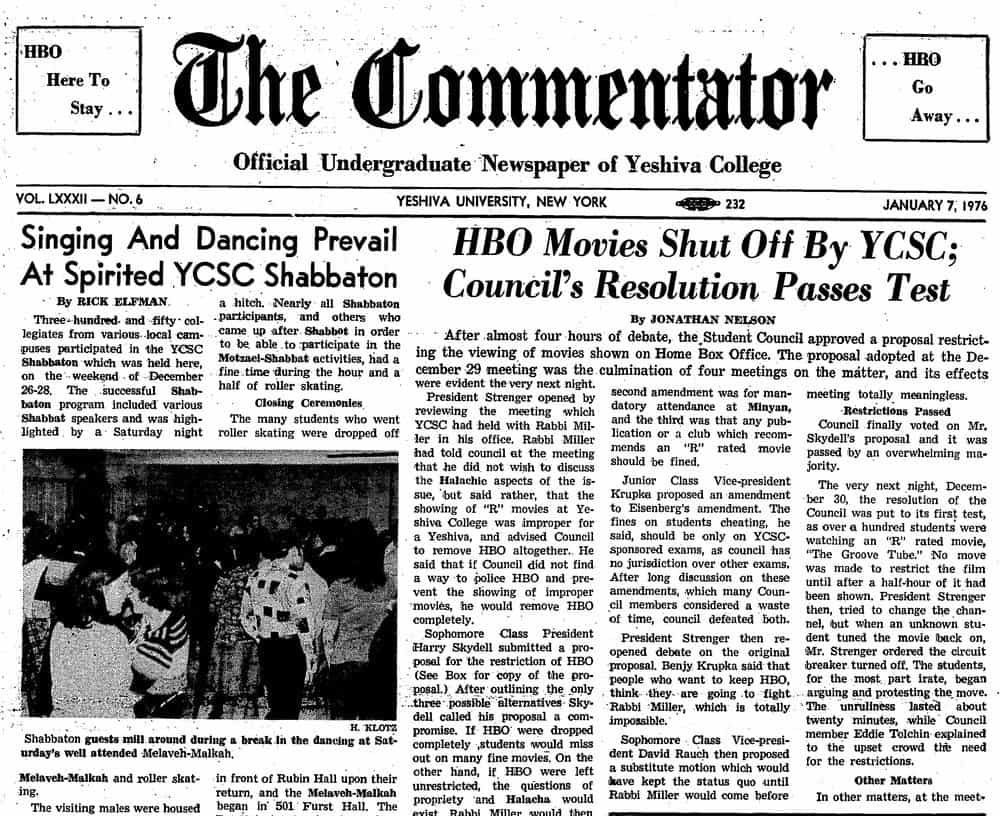 Modern Orthodox Icons?
Not everything is fair-game among the Modern Orthodox. Certainly, there are borderlines. In 1975, Yeshiva College’s student council took measures to ban the newly-launched HBO and its R-rated content from student lounges. The Modern Orthodox also substitute its own version of acceptable behavior. Take, for instance, dress. In May 2017, students of the Maimonides School in Brookline organized a fashion show that featured the sort of modest attire typical of many Orthodox young women. On the fateful Sunday, 30 students—and a few mothers—took to the runway in stylish apparel to demonstrate that “wearing a longer skirt doesn’t have to have a negative connotation.”

But this sort of cultural reinforcement lags behind the concrete forms provided in Orthodox Right circles. The Modern Orthodox call self-expression and freedom to explore a virtue. Still, Modern Orthodox Jews have tried to create icons and images that represent their religious proclivities. Our ideologies have manifested in prayer books, synagogue melodies, and headgear (male and female). To date, however, none of the branding has had much staying power.

Just like Lego, the Modern Orthodox reckon, “when things go stale, they knock it down.” Ultra-Orthodox children, though, tend to keep their Binyan Blocks intact. And, there’s something to that.